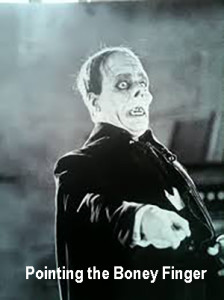 Posted By: Editor - Nelson Thibodeauxon: May 06, 2015In: Politics
Print Email

Definition: A whisper campaign involves spreading a tawdry or malicious rumor about your opponent—while making sure the rumors aren’t traceable to you.

The bony finger of guilt points directly at Mike Taylor and, by her refusal to condemn the reprehensible act, Nancy Coplen becomes complicit in the attack.

Leaking “secret” information or digging into the candidate’s past that expose conflicts with the image of the candidate can result in an argument if it is a dirty political whisper campaign or truth-telling.

However, manufactured, irrelevant, cruel, lewd and incorrect rumors or outright lies are only designed to damage or destroy an opponent and can be identified as dirty tricks and dirty politics.

The entire effort is to create something that requires the victim to defend against the lies versus honest debate on the issues.  Or this can also be the dreaded “October” surprise.  That is the last second accusation to sway voters and not give the opponent an opportunity to correct.  In this case it appears that Mike Taylor dropped the “October” surprise in “September”, because there is still time for those who have not voted to be informed of the truth.

Sometimes dirty tricks are not only aimed at slandering the opponent. Dishing the dirt against the opponent can be effective at alienating voters in order to turn them off from the entire election. These tactics may reduce turnout in order to assure that the core supporters show up at the polls.

The old adage that one living in a glass house should not throw stones, seems appropriate to a candidate with Taylor’s lengthy list of personal indiscretions, some of which have been reported by LNO, while some are known but not reported due to potential legal issues and/or respect for others.

However, one major rule in a “whisper campaign” is to make your vicious, unsubstantiated attack stealth.  No one should be able to trace the lies to you.

The problem with the latest “Whisper Campaign,” in the City Council election scheduled for May 9th, is the apparent author of the “anything goes in one of my elections,” Mike Taylor previously had briefed close allies in town.

Apparently Taylor was unable to contain his enthusiasm. He presented his scurrilous plans to others and some of them have let it slip out prior to the mailing.  These were other like-minded people bonded by their enthusiastic, desperate attempt to keep the current status quo on city council via their opposition of Proposition 1 and support of Taylor and Coplen.

At minimum, the suspects now include Larry Autrey, Jim Fletcher, Louis Miller, Councilman Chuck Mogged, wife Jan Mogged, Councilman Tom Hart and potentially more to be named later. Not only will these individuals feel the backlash of citizens who were disgusted with Taylor’s efforts, but it is likely they will all have the unique opportunity to appear in court in the defamation lawsuit that will follow. 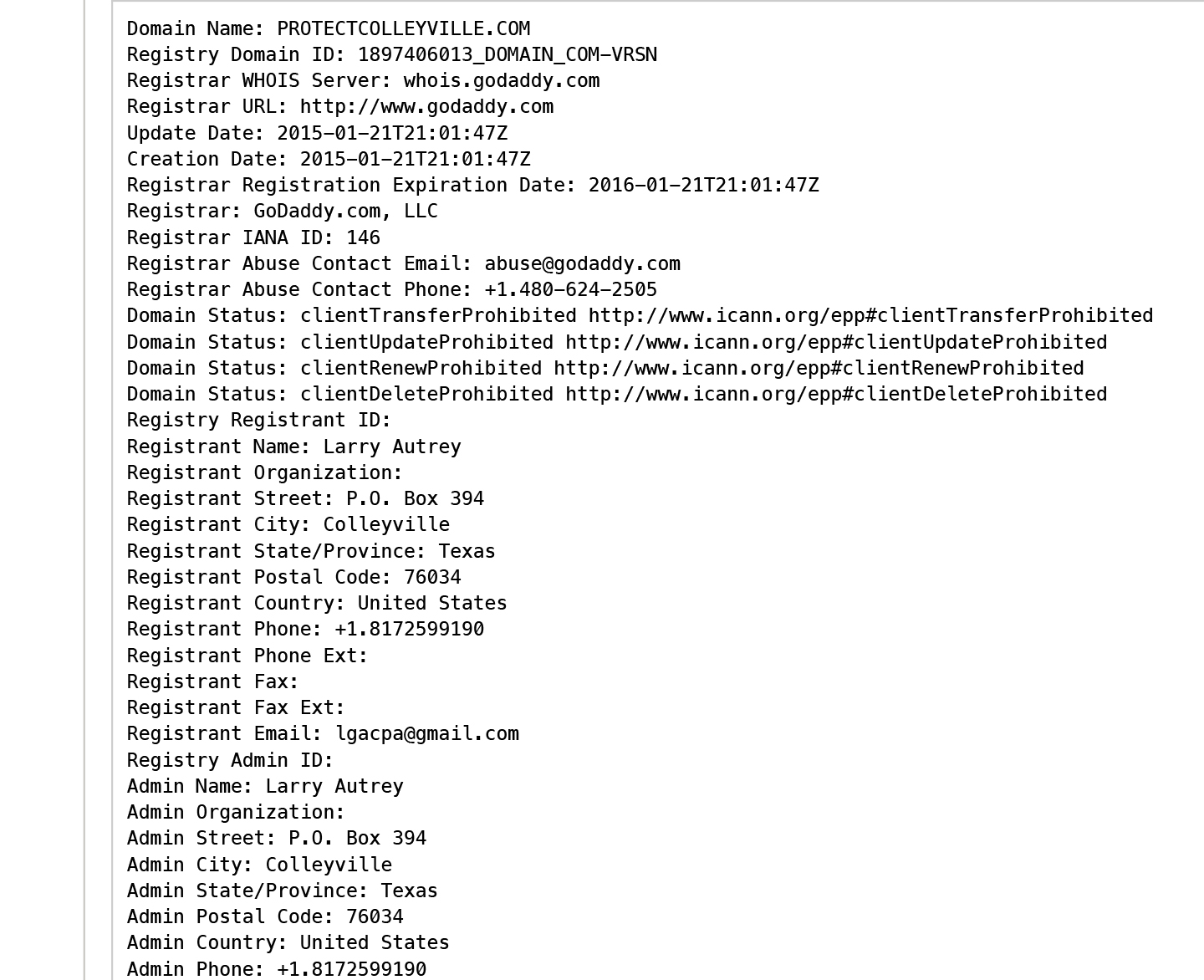 Above the Register Information for ProtectColleyville.com, the alleged PAC Website

The fix is in and now starts the Social Media Propaganda by Jim Fletcher see above. In this orchestrated attempt to save the election for Taylor and Coplen, Fletcher jumps the gun and starts the Whisper Campaign literally almost before the mailer reached the select few mailboxes in Colleyville.

Of significant disappointment in this election is Nancy Coplen who has securely tied her campaign and potential fate in this election to Mike Taylor.  Further, the fact Coplen will not repudiate the tactics of Taylor and/or the PAC she is for evermore attached to this type of gutter politics. 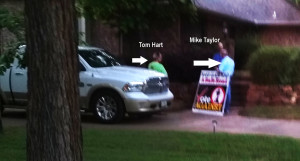 COUNCILMAN TOM HART AND MIKE TAYLOR WITH A VOTE NO SIGN

COUNCILMAN CHUCK MOGGED WITH A VOTE NO SIGN ABOVE

Three of the existing 7 Council Members have been identified as clearly hiding behind the illegal PAC.

However, the whole election makes one feel as if they have been slimed.  The circle of those hiding behind the alleged PAC “ProtectColleyville.com” has now surfaced.  “Alleged” because nowhere has the claimed PAC been registered.  Therefore, this illegal PAC has been thrown up as a shield to allow Councilman Chuck Mogged, Councilman/Up for re-election Mike Taylor, Candidate Nancy Coplen and their Merry Little Followers to remain behind the VOTE NO on PROPOSITION ONE signs; sort of like Taylor was supposed to do with his attack mailer.

A supporter of the goals of this PAC also includes Mayor David Kelly, (see the interview with Mrs. Martha Bufe on this site). As far as the “Treasurer” of the PAC, Larry Autrey, along with the Taylor gang, complaints are being filed with the Texas Ethics Commission and one would suspect a fine forthcoming.  Another ethics complaint will be filed against Mr. Taylor and his “oops they found out it was me mailer.”

I would encourage Colleyville Voters to ask yourself why is this type of vitriol being exhibited by those with non-paying city council positions?  Why do they want to hold on to power so badly?
One has to ask do you want to continue leaving the reins of government in the hands of people like Mike Taylor or Chuck Mogged?  Vote Saturday, Bransford Elementary 7 am to 7 pm.