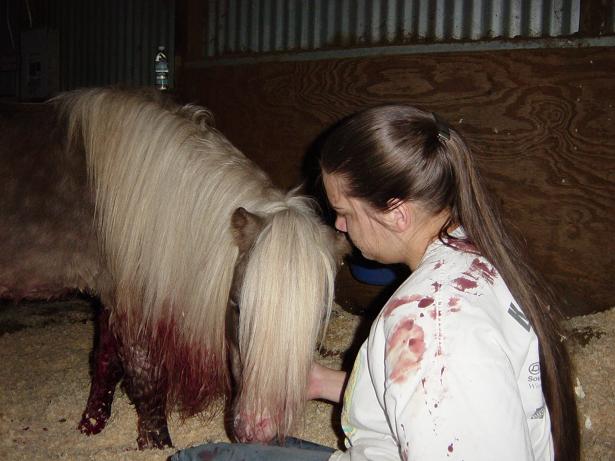 In a series of articles, LNO documented and followed the tragic story of a neighbors Pit Bull dog viciously attacking the neighbor’s pet Shetland Pony.

January 03, 2004
Shetland Pony Viciously Attacked by Neighbor’s Pit Bull
Shetland pony owned by Colleyville resident, Bobby D. Myers, was nearly killed December 21, 2003, after a vicious attack by a Pit Bull. The dappled and flax-maned little gelding was grazing in his pasture, at 401 W. LD Lockett Road, behind the Senior Citizen Center, when the 6 y.o. male canine tore after him without provocation.

January 11, 2004
Colleyville Judge Ames rules that dog that attacked pony is to be removed from city immediately and animal control officer to be informed of where the pit bull’s new home is located.  Otherwise, the dog is faced with the death penalty. (PHOTOS)
Judge James Ames made his ruling Thursday regarding the attack on a Shetland Pony by a neighbor’s Pit Bull. The six year old male canine,”Bo”, owned by Michael Garvey of 5905 Hunter Trail, was deemed a Dangerous Dog by the Municipal Court and sentenced to permanent exile from Colleyville for the vicious mauling of the little stallion.

January 17, 2004
Pit Bull that attacked Pony is put down.
From three Offense Supplements filed by Animal Control Officer Roger Cannon this week, LocalNewsOnly.com has learned the fate of the Pit Bull who attacked a Shetland Pony in late December. Bo, the canine classified in Colleyville as a registered Dangerous Dog last week in Municipal Court, banned from the City for life, has been humanely destroyed at the Collin County SPCA.