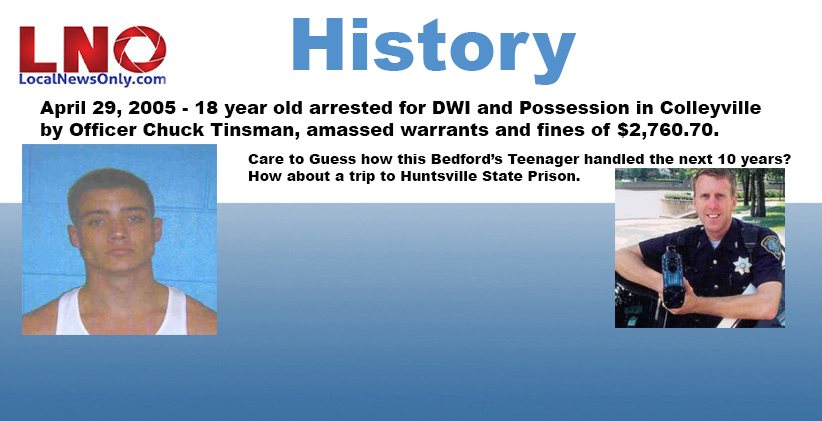 Bradley Michael Berry turns 19 on May 7th
Officer Chuck Tinsman of Colleyville was advised of a possible intoxicated driver, on Sunday April 10th, after the Grapevine Police Department notified Colleyville dispatch. Tinsman spotted the dark gray Ford on SH 26 around 5:29 pm and began to observe the driving. When the car changed lanes without signaling, the officer had traffic cause to stop the car.   His alert action took an 18 year old intoxicated driver and one in possession of marijuana off the road, at least until a judge releases him to do it again.

After being stopped by Officer Tinsman, Berry could not produce a driver’s license.

Officer Chuck Tinsman
Officer Tinsman had Berry step out of the vehicle and he observed an open can of beer between the door and the seat.  Tinsman then confirmed that none of  the other three passengers were 21 or older.  The police report stated that Berry had the smell of an alcoholic beverage on his breath when he spoke.  Tinsman placed Berry under arrest for DUI-Minor and put in him in his patrol unit. Berry was transported to the Colleyville Justice Center jail for booking.

While at the jail Berry was patted down.

Officer Bob Etheridge asked Berry to remove his shoes and a bag of marijuana in a plastic bag falls out. The police report states that Tinsman then checked the back of his squad car and found a torn plastic bag with marijuana on the floorboard where Berry was sitting.

After a routine check of warrants, the 18 year old was found to be of interest to the North Richland Hills Police Department with a Minor in consumption of alcohol for $782.60 and Assault (family violence) for $620.10.

Commentary:
Imagine how proud you would be if your 18 year old was able to accumulate more than $2,700 in fines, a DUI and possession of drugs a month before his 19th birthday, along with a little family violence thrown in to round matters off. Speaking of violent, could this winner acted like similar to Florida child that fought with the principal was handcuffed and taken away at the same age?  Would that have been a precursor to future conduct?

Too bad he didn’t have a fat lawyer to threaten the school and police officers at that age, but what the heck, he is going to need a lawyer now!

April 29, 2007 – Arrested by Arlington PD for Driving While Intoxicated – Prosecutor Changed Charge to Driving While License Invalid- Convicted Fined Court Cost of $206 and $250 Court Fine. Subject had choice of confinement or payment of fine.

May 15, 2007 – Arrested by Arlington Police Charged With Assault Causing Bodily Injury to Family, Enhanced a 3rd Degree Felony – Plead Guilty in Criminal District Court #3 and Sentenced to 2 Years at the Texas Department of Corrections.

November 10, 2007 –  Arrested by Dallas/Ft Worth Airport Police Attempting to Evade Arrest and Detention with a Vehicle a State Jail Felony Sentenced to an additional 6 months in the Texas Department of Corrections.

December 15, 2008  – Remanded to Department of Criminal Justice, Huntsville starting Custody March 11, 2009. On December 15, 2010 the Pardon and Parole Board Discharged Berry

December 08, 2012 – Arrested by Fort Worth PD for Possession of Marijuana Plead Guilty, Sentenced to 30 day confinement.

February 10, 2015 –  Arrested by Fort Worth PD for Theft of Property more than $500 a Class B Misdemeanor – convicted in County Criminal Court 7 Fort Worth and sentenced on June 4, 2015 to 30 Day Confinement.