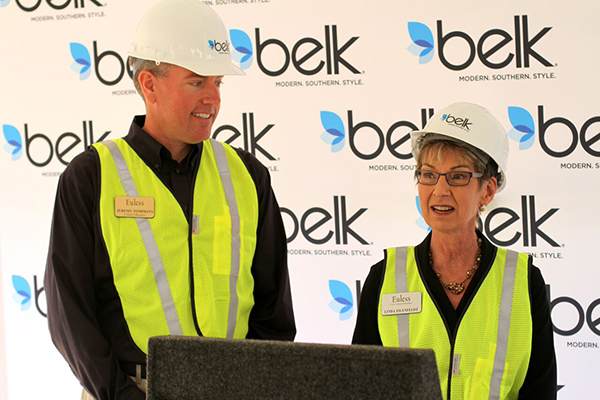 Community leaders from the Mid-Cities celebrated development of Belk’s 95,000 square-foot fashion store at the new Glade Parks retail center in Euless. More than 30 members of the community painted the first Belk “blue” strokes on the store, which the company expects to open in March 2016. The Belk Euless store will become the 16th in Texas and the ninth location in DFW.

Belk has been in Texas since 1953 and has been in the DFW market for more than 10 years. Texas continues to be the brand’s fastest growing state and among its strongest sales markets. The company’s $10.8 million investment in the Euless store will incorporate the newest in retail design, lighting, merchandise presentation and décor. The store’s assortment will include premium brands such as: Ralph Lauren, Vince Camuto, Michael Kors, Kate Spade, Doony & Bourke, Calvin Klein, Lucky, Jessica Simpson, Marc Jacobs, Lancôme, Estée Lauder, Clinique, Donna Karen, Dior and more.

Belk is a retailer with a long commitment to serving its local communities. Recently, Belk held its Fall Charity Sale where shoppers enjoyed deep discounts on designer brands while raising money for local nonprofits. Belk and its customers raised more than $6 million for thousands of charities. In DFW, Belk raised $25,000 to be distributed among 36 participating local charities. In April 2016, local charities will be able to sign up to participate in the semi-annual fundraising event, which will also take place at the Euless store.

Euless Council Members, Linda Eilenfeldt and Jeremy Tompkins, shared insights about the economic impact Glade Parks and its retailers will make in the community. The City of Euless created a Tax Increment Reinvestment Zone (TIRZ #3) for the new retail center, which is expected to produce a net benefit of $225 million over a 25-year period for all taxing jurisdictions, with $97 million to Euless over the same time period. In addition to generating revenue in North Texas, this development brings a great quality-of-life addition with top retail and entertainment for area residents to enjoy.