NOTE COMMENTS ARE POSTED ON THE BOTTOM OF EACH PAGE

Tuesday night November 17th, Colleyville City Council will take up the new Comprehensive land development codes at the Tuesday evening meeting.  This is the first reading so a vote will not be taken, however after this mandatory meeting a vote can be taken at the next City Council meeting.  It appears the City’s Logo of a rural setting with an airplane flying above a tranquil rural scene with a horse, is no longer in vogue with the majority of Colleyville’s City Council.

The issue  has a lot of citizens scratching their heads as to what appears the Colleyville City Council turning it’s back on years of residential development requirements that placed emphasis on the rural feel of Colleyville. The, heretofore, mandatory 1.8 dwellings per acre is being proposed to change to as much as 3.5 dwellings per acre, as well as, an open door to high density development.

One example of the direction city council appears to be moving is the proposed development on Lavaca Trail, adjacent to and between R20 homes and a 5 acre family farm.  While this issue has been brought before the Planning  and Zoning Commission and twice before City Council, it is the high density burden that just doesn’t appear to go away.

Joel Stanley, is featured in this video concerning his mom’s family farm. He takes exception that City Employees have joined with the Developer to put pressure on him to make some kind of deal with the developer.  However, Mr. Stanley explained to LNO, it is more than just his farm, it is about the reason he moved to Colleyville and the overall vision on keeping the city’s rural feel with larger lots than proposed.

After a unanimous choir of negative comments, Colleyville’s City Council decided on a 6 to 0 vote (Councilman Jody Short was absence) to deny this project that requires a super majority of at least 6 votes because of surrounding land owners’ opposition.  However, the vote was taken “without prejudice” which means it can be brought back up.  Mayor David Kelly highlighted that fact when he explained to the developer that he could bring the issue back up at “anytime.”

A “Comprehensive” plan virtually declaring that high density is the wave of the future for Colleyville is in the works.  Further, that Colleyville needs to continue with the high density approvals that have been by special permit heretofore, (in contrast to the agreed 1.8 dwellings per acre), to a agreed standard of high density planning.  However, this may not be the wishes of Colleyville citizens as many are beginning to have their voices heard.

This new plan to “urbanize” Colleyville has local residents on and near Lavaca Trail continuing to fight against a high density development, with house lots only averaging 7,600 to 7,800 sq ft, for a total of 15 lots in a narrow 5 acre area.

LNO has been informed there is a petition site for those who are concerned about changing the basic philosophical concept of a rural feel for Colleyville, versus high density residential.

The maps below show the proposed development on Lavaca that was turned down but given perpetual life by City Council by a denied “without prejudice” vote. 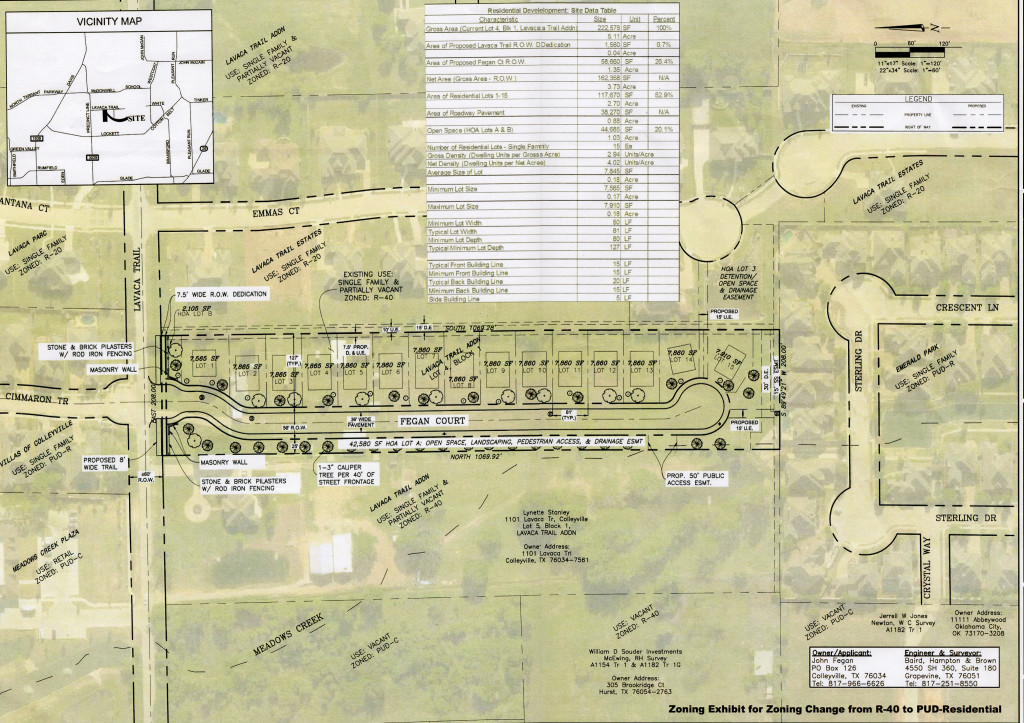 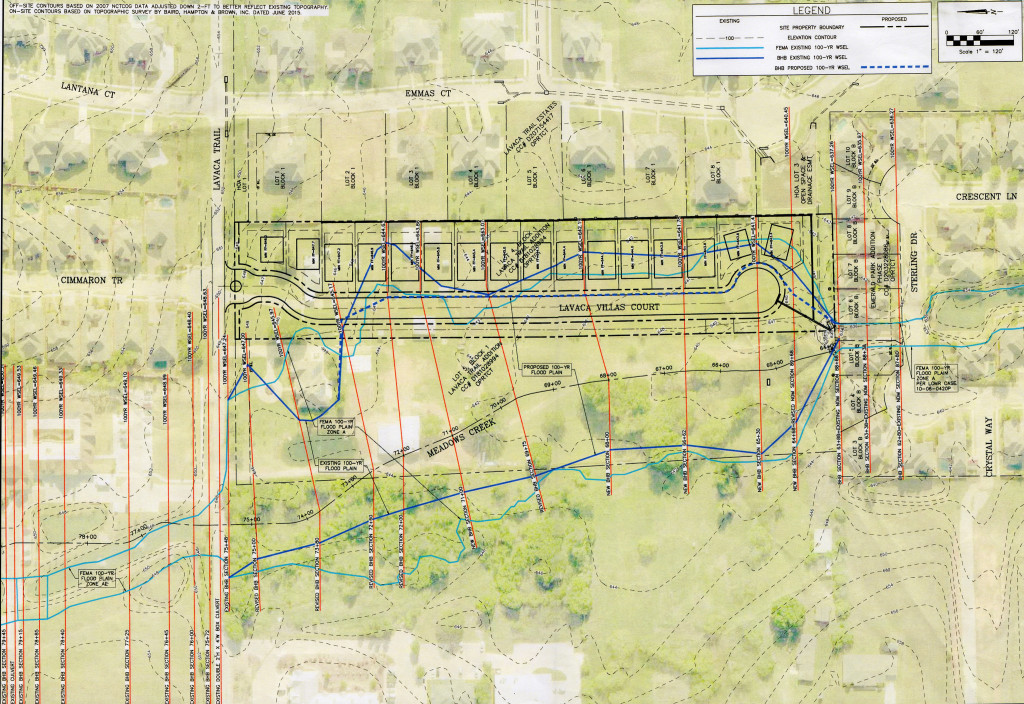 Topography map for planned development shows, within the blue lines, the present flood plain.  The proposed area would be required to put in considerable fill dirt to raise the topography, a plan that the neighbor fears will create flooding on his farm.