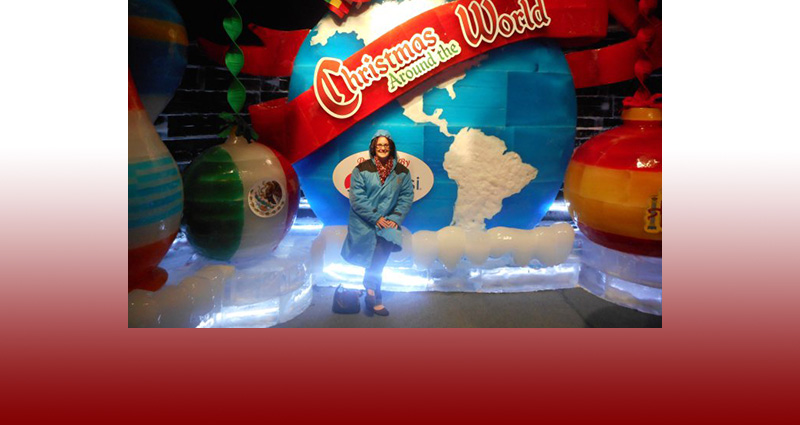 A Lone Star Christmas at Gaylord by Deandra Wilson

My friend, Thom invited me to accompany him on his first excursion to the Gaylord Texan in Grapevine. Frank, my boss at Texas Air Doctors, agreed to let me off early as long if I promised to use the trip for my blog.

I was very excited because the Gaylord is a very interesting place to visit at any time, but it’s particularly inviting around Christmas because of all the decorations!

The Gaylord Texan Resort Hotel & Convention Center is located in Grapevine, and was built in April of 2004. It is a HUGE 400,000 square feet of sights, sounds and entertainment.

Along with 1,511 rooms, 127 suites and four restaurants, it has the fabulous Glass Cactus Night Club, rated as one of the top 25 nightclubs in the United States.

As you probably know, Grapevine is the Christmas Capital of the World and the Gaylord Texan helps make that title true.

Christmas trees, colorful decorations, bright lights are everywhere: hanging from the 10-story ceilings, lining every railing, placed on every tree that grows along the river that runs through the Resort. It is truly a beautiful and awe inspiring sight. As you walk the pathways you’ll see there is a little train set with a town called “Lowdown” that’s lit with solar panels.

Exploring the area had given us an appetite, so we started looking for a place to eat: Old Hickory Steakhouse, Zeppole Coastal Italian, Texan Station Sports Bar & Grill, or theRiverwalk Cantina. Although the decision was hard, I wanted to sit by so we could watch the koi, so we chose the Riverwalk Cantina. The view setting was both charming and intimate with the little river flowing past us, surrounded by the beautiful plants and flowers, plus the koi fish below.

The menu looked delicious, a modern twist on classic Tex-Mex dishes with an open café replicating the feeling of San Antonio’s Riverwalk! They had so many options from Sizzling Fajitas, Street Tacos, Seared Gulf Coast Grouper, and The Texan Hamburgsea (100% Angus beef, bacon, jalapeno cream cheese, cheese, lettuce, tomato, smoked onion on a house-crafted brioche bun!) ! For starters we had the queso dip which came out in a skillet, it was the perfect appetizer, the hot gooey cheesiness! Next, was our main course! I had the Sizzling Shrimp Fajitas and Thom got the Texas Hamburgsea. Everything was cooked to perfection and tasted wonderful.

After dinner came the main attraction – a tour through the annual Christmas show called “ICE” (which is open until January 3, 2016)! Ice is where a group of Chinese ice artist carve over two million pounds of ice into a winter wonderland! They use three types of ice for the exhibit, Clear “Crystal Ice”, White Ice, and Colored Ice. (http://www.marriott.com/hotel-info/dalgt-gaylord-texan-resort-and-convention-center/lone-star-christmas/udp3ura/making-of-ice.mi)

The theme this year was Christmas Around the World. As the line thinned out, was our turn to go in as they gave us some large parkas to provide some extra warmth. Though Thom and I were very excited on what we might see, we weren’t prepared for how cold it was going to be in the Exhibit. The temperature is 9 degrees and today there was a wind blowing as well! It was really chilly! Although I’ve never been there this is what I imagine Christmas morning Alaska would be like.

It was quite amazing what they made out of ice! They had several ornaments representing different countries. For example, for Germany, they made a gingerbread house, with a tree behind, and a nutcracker standing on guard! Their attention to every little detail made you wonder whether was really ice or not.

I loved the Swedish display! It was a large wooden shoe with a carrot sticking out of it, Santa on a white horse, and a Swedish girl holding tulips. Mexico was very festive! With piñatas and streamers hanging from the ceiling, it looked like they were ready to hit that piñata! All the colors were vibrant and lively.

Oh and the toys! There were giraffes, cars, elephants, all carved from ice.

There was a little break in the ice sculptures where you can slide down the ice! Although many children and their parents were enjoying it, I felt it was too cold for me and I was afraid I would get stuck to the ice. I could just hear the television news teasers, “Local woman sticks to the ice at the Gaylord – news at 10.” No, thanks, I’ll walk on.

The ice sculpture that was most attractive to me was a beautiful white dove, with its wings spread in flight and the word, “Peace” written underneath. It was quite extraordinary.

It is so hard to believe that all of this beauty is cut and sculpted in such detail from large block of ice! I got very lucky to see a man doing some the carving a bear and got a good photo of it.

When we reached the North Pole exhibit, Santa was sitting in his big cushy chair checking his Naughty and Nice list. I saw my name on the nice list! J

I got to sit in a sled, next to a reindeer and although I assumed the Elf was going to be my driver, just sat back on the presents ready for a joy ride!

The last scene of the ICE Exhibit was a nativity scene. An exquisite Angel was lit and stood back watching the Mary, Joseph and the baby Jesus laying in the manger. It was absolutely breathtaking. It made me thankful for everything that has occurred in my life.

Outside the exhibit, they had hot chocolate! (I’ve learned now, how essential hot chocolate is when it gets cold.) There was a little shop with trinkets, ornaments and other souvenirs you could purchase to remember the event. What caught my eye the most were the big red Santa boots!

On our walk back to the main resort, there were so many Christmas Trees decorated in so many different fashions. One was decorated with blue ornaments and white stars for the Dallas Cowboys. They even had a Christmas tree hanging from the ceiling that was all lit up. Another was made out of Patron liquor bottles and that had been fashioned into a fountain.

When we got back to the central it was totally dark outside and the decorations inside the glass Atrium, that is the ceiling of the Gaylord, became more evident and beautiful! It looked like the lights were falling out of the sky, the Christmas trees were lit up, even the main lobby of the hotel had perfect Christmas decorations. Even as we walked back to parking garage the lights were all along the way, the trees were lit up, and right outside the hotel by the flags, across from the pond, it looked like shooting stars reaching for the sky.

The ICE exhibit was fun. The artists were skilled. The venue was beautiful. And the lights – they were spectacular. All in all, I think Thom enjoyed first visit to the Gaylord just as much as I did, and it was my third trip!

The Gaylord has several other events this Christmas Season also. You can have breakfast with Rudolph, build a gingerbread house, cookies and milk with Ms. Claus, Elf on the Shelf scavenger hunt, Santa’s Wild Workshop Snow Tube, Santa’s Snowball throwing workshop, and a meet and greet with Rudolph and friends!

Want to know what’s going on in your town or have suggestions for me?