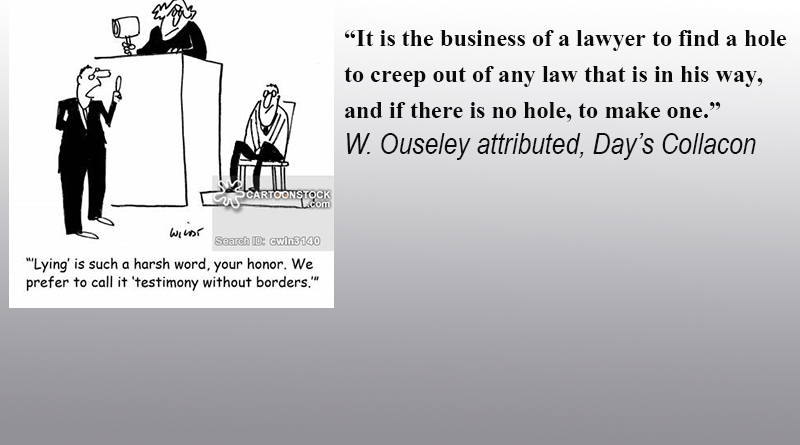 From a 2012 Column Titled, “More Than Just Words: This Is What It Really Means to Talk Like a Lawyer,”  by Jim McElhaney’s  25-years the Litigation columnist for the ABA Journal.

He tells the story of a young lawyer that had felt he was well prepared for litigation in a lawsuit over appliance safety. But suddenly the General Counsel changes course and poses the question to the young lawyer on what he would say if he two of them were at the court of appeals. “How are you going to convince us that for 60 years our reasoning has been wrong?” ask the General Counsel.
The young lawyer was flustered and stumbled around before he ran out of ideas.

“You learned something a lot of lawyers never understand,” said Baker. “A lawyer is a professional speaker. You talk for a living. Every time you say something as a lawyer, you are making a professional presentation.

Yes, a lawyer words are his weapons; a lawyer is trained to be calculating and deliberate in statements.  Which brings up the previous Editorial that included video for the Pre-Counsel meeting discussing the City Manager’s complaint, seen here; See the Original Article and listen carefully to the attorney. So readers must ask about the City Attorney’s statement then, “AND regarding the citizens right to know, “I did some Internet research myself and found that the property was “subject to foreclosure.”

In Ben L. Stool, Assistant City Attorney response in PDF, seen here: BoyleresponseaboutFadden, suddenly Mr. Stool has retroactively determined not the property was “subject to foreclosure,” but ACTUALLY foreclosed on by the Deutsche Bank on February 1, 2011, BEFORE the City Manager bought it.  Of course, there is a substantial difference between “subject to foreclosure” and “foreclosed.”

The proof offered by the City Attorney is a TAD review found here: TAD information Fadden . That simply lists the chain of owners and proves nothing about when knowledge was obtained by the City Manager;  however we do know the David Boles owner listed previously was in high shenanigans concerning property including this property.

David Boles, 52, of Colleyville, Texas, who owned Metro Buy Homes, LLC., pleaded guilty this afternoon before U.S. Magistrate Judge Irma C. Ramirez to one count of mail fraud, announced U.S. Attorney James T. Jacks of the Northern District of Texas. Boles faces a maximum statutory sentence of 20 years in prison and a $250,000 fine. In addition, as part of his plea agreement with the government, Boles agrees to pay restitution for losses resulting from all of his criminal conduct and not just limited to losses stemming from his conviction offense.  More Details on Boles:
Boles_FBI

Of course, the City Manager’s Property, 59 Piazza has continued to have an interesting impact, especially in the “highest standards of ethics and integrity.”  With the arrest of her Tenant for DWI, in Colleyville and the arrest an employee named James Hice. Hice was arrested in Burleson on July 14, 2015 in a sting operation conducted by Johnson County law officials and the Texas State Attorney General’s office.  Records show that when Hice was arrested he had a copy of the correspondence email to an individual he thought was 14  years old.  On the arrest report, Hice listed his Employer as McCusker Holding Corporation and his position as “Lawyer.”  Apparently until the Hice arrest he was listed as follows “James Hice serves as the General Counsel and Risk Manager for McCusker Holding Corp”.  Under Emergency Contact Hice listed Susan Naeve and relationship as “Fiancée.”  Naeve is listed as the Vice President of Legal & Human Resources at McCusker & Company a McCusker Holding Corp Company on the company’s website.  More on the arrest of  Fadden’s Tenant and His Employee

Now were the words stumbled over because the property was foreclosed on in February and purchased by the City Manager in April?  An amazingly fast close without any prior information shared with the City Manager, from a bank, wouldn’t you say?  Let’s have ALL the information Mr. City Attorney.

When a City Attorney, who has had a substantial period of time to look at the complaint, uses the word “subject,” then his words must have meaning;  however, he now makes this startling fact available, (of course the LNO FOIA request about this statement and information proof remains in limbo); so now, the Assistant City Attorney Mr. Stool has made this statement; (the same attorney that billed the city for a conference with Jennifer Fadden titled, “Conflict of Interest, City Employee).  When LNO requested via FOIA for a copy of the notes or outcome of this discussions about the billing for, (“Conflict of Interest, City Employee), THAT YOU THE TAXPAYERS PAID FOR, LNO receives the standard brush off, “No Responsive Documents”.  So we are to believe the City Attorney’s office advises the City Manager, but there is NO record, NO notes, not even scribbling on a Big Chief tablet.

Note the Stool letter also states, “Therefore, no actual or potential conflict of interest existed under either State law or the City Charter of that complaint either.”

However, the City Attorney’s law firm was directed to retain a Mr. Ted Steinke to provide an independent review of the issues raised by the complaints.  “The Colleyville City Council and staff place a high priority on maintaining the highest standards of ethics and integrity.  It is in that spirit that we were directed to retain Mr. Steinke despite the procedural and substantive defects in your complaints.”  Apparently, the Mayor and City Council sees nothing wrong with spending money on yet another attorney on an issue that has already been decided by the City Attorney’s Office, the same law firm selected to pick Mr. Steinke.  How about THAT for an “Independent Review?”

Now citizens lets get this straight, the same law firm that advised Ms. Fadden she didn’t have to reveal any facts of her purchases is paid to retain yet another lawyer for the theatrics of doing an “independent review,” on a decision the law firm retaining him has already pronounced to not be valid!

Of course, this is the EXACT question the City Manager was ask to reveal.  Now we must believe the guy that advised her not to reveal anything (apparently) of property purchased, without any documents or verification, a simple declaration of how the property was acquired and the fact the property was PUBLICLY POSTED, would resolve the issue.  Where are those records?

Because it does not take a Harvard Law Professor to figure out, IF the City Manager has done nothing wrong, then why all the hoopla? Why not just reveal the paperwork on the City Manager’s purchases for all to see.  Sorry Mr. Stool, I don’t think the Citizens of Colleyville will be comfortable with your suddenly changed story that the property was foreclosed BEFORE the City Manager purchased the property and that all citizens had the same opportunity with no insider advantage.  Because IF this were the fact, why are we spending taxpayers monies to “review” the obvious.  Where is the information that was posted on the foreclosure for all to see?

Concerning providing guidance to the issue of ownership by the City Manager and City Staff; why not simply follow the City Charter, with the additional declarations of property owned and how it was obtained to avoid suspicion of wrong doing.  Once again, the purpose of the complaint is because the City Manager, once again, apparently on the advice of Mr. Stool, has refused to make the information public.  Now citizens must wonder what are the real intentions of the City Manager and what are the potential conflicts that have already taken place?

The Lawyers’ trade is a trade built entirely on words. And so long as the lawyers carefully keep to themselves the key to what those words mean, the only way the average man can find out what is going on is to become a lawyer, or at least to study law, himself. All of which makes it very nice — and very secure — for the lawyers.

FRED RODELL, Woe Unto You, Lawyers

The only secret that the lawyer really possesses about the law is that no one can ever be certain of what the law is…. The lawyer is accustomed to the ways of bending and changing rules to suit his (or his client’s) purposes, to dance in the shadows of the law’s ambiguities. Rules hold no particular terror for the lawyer, just as the sight of blood holds no terror for the surgeon. Because he operates a system of rules, the lawyer becomes indifferent to them in the way that a doctor becomes indifferent to the humanity of the body that is lying on the operating table.

JETHRO LIEBERMAN, Crisis at the Bar