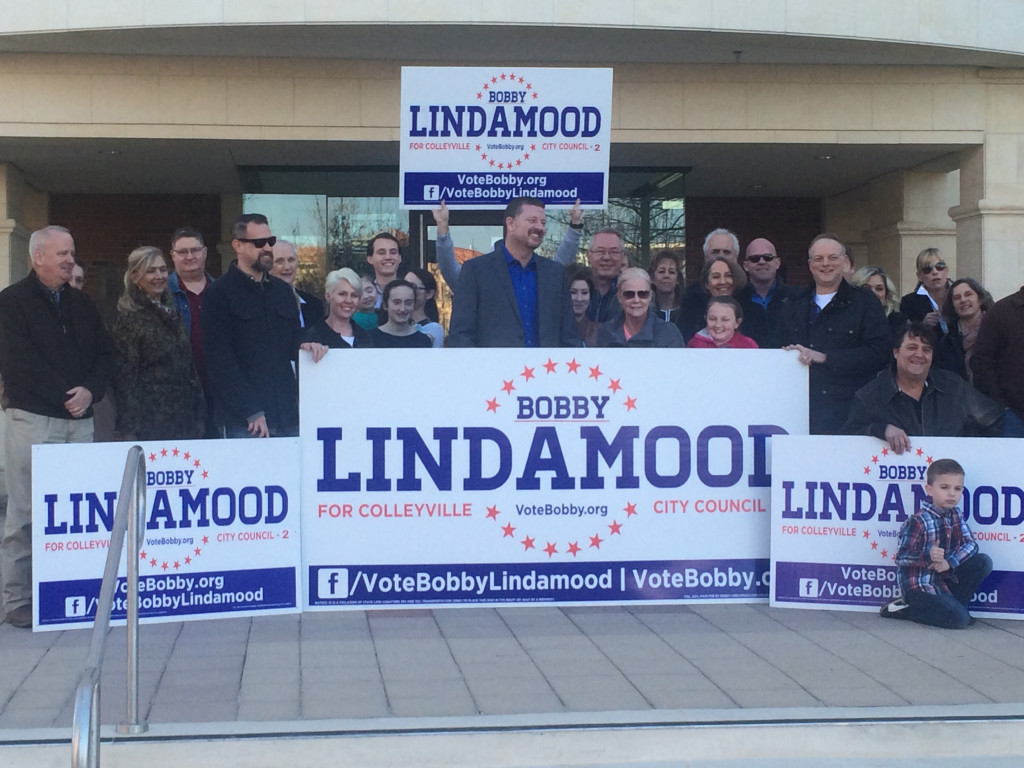 Bobby Lindamood announced this week his plans to seek a City Council seat in the May 2016 Election for Place 2.  Lindamood lost by a small margin of 174 vote out of more than 5,000 in his first attempt to gain a seat on the Colleyville City Council against perennial candidate Mike Taylor.  That election was marred with a last minute mailing supporting the Taylor camp that can best be described as smut.

Lindamood (Center) on the steps of Colleyville City Hall upon his announcement.

Place 2 is currently held by Chuck Mogged who was a visible and active opponent of the Glade Road Citizen’s Initiative last year.  In his pugnacious effort to swing voters, Mogged used statistics that were clearly a false narrative concerning the amount of accidents on Glade Road.  In addition, he included City Employees in his efforts by having City Secretary Amy Shelly write one of his opening remarks supporting his political agenda, as well as, emailing Mona Gandy, Marketing Director of Colleyville, requesting her input on his planned Press Release that was going to use “the angle” of safety on Glade Road.

The discovery of Mogged’s intentional misrepresentations can be found in emails as  reported by LNO during his controversial vote on the High Density Comprehensive Plan.. Click Here.

Note; the Plan has morphed into the High Density Plan because of 5 of the City Council members; Mayor Kelly, Council Members, Mogged, Short, Taylor and Coplen’s refusal to clarify the meaning of the 1.8 per acre density goal, leaving the interpretation open to include; streets, sidewalks, right of ways, unusable land space, etc. in the calculation, therefore creating more high density approvals, however using the veil of the 1.8 acre goal.  Also the further refusal to define the “transitional areas” of more high density approvals.  A snapshot of the high density reality can be found in the Village of Colleyville’s current construction underway; as reported on LNO January 4, 2016.

This coupled with the city council’s current agenda to white wash the complaint that the City Manager Jennifer Fadden may have had a conflict of interest with her purchase of a villa in the Village of Colleyville, that was “about to go to foreclosure.”  The city council has voted to spend taxpayer’s monies to “vindicate” the City Manager, (according to Mayor Kelly in a recent “pre-council” session) versus having her answer this SIMPLE QUESTION.  MS. FADDEN HOW DID YOU BECOME AWARE OF THIS PROPERTY AND TAKE ADVANTAGE OF A PURCHASE CONSIDERABLE BELOW MARKET VALUE AND WAS YOUR AWARENESS THE RESULT OF INFORMATION THAT WAS AVAILABLE TO ALL CITIZENS OF COLLEYVILLE AT THE SAME TIME.   This ongoing effort of LNO to gain transparency in the City Government of Colleyville is highlighted by this one simple question.