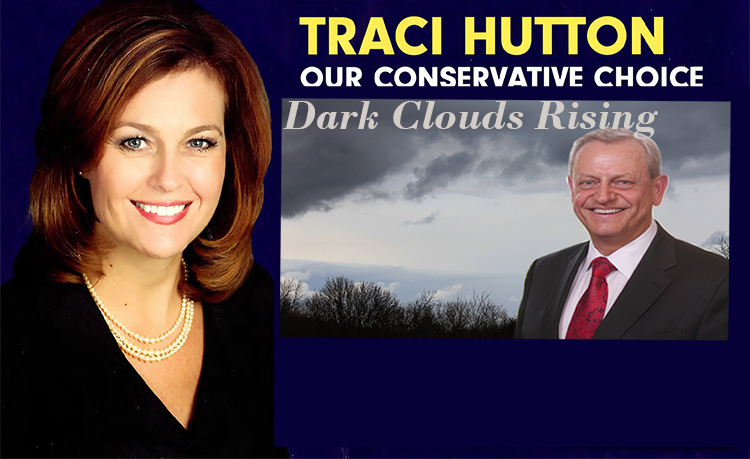 “As a “Baby Boomer” for the better part of my generation, the Republican Party has demanded higher moral standards of all of us, while failing to meet these standards on many occasions. It is far easier for the public to tolerate personal mistakes and human failings than it is to accept shameless hypocrisy.”

DISCLAIMER: The following email was received by LNO and apparently widely distributed.  LNO has been contacted by a number of concerned citizens regarding the information in the email.  LNO has redacted the name of the previous husband to minimize the impact on his personal privacy. LNO does not recognize the name of the sender, but is familiar with the subject matter. LNO can not confirm the current relationship of the parties.

Please know that this is unpleasant to report but it is vitally important that voters understand who we are electing as judges.

Our judges make decisions that profoundly impact families who appear in their courtrooms.

Traci Hutton is running for district judge in Tarrant County saying that she represents “family values”. When you run for public office, your character is on trial. Voters deserve to know the truth about Ms. Hutton so they can decide if she deserves their vote. Husband married his high school sweetheart, Traci Hutton, and they had 3 children together. When the children were small, Husband supported Traci and the children while putting Traci through law school.

In 2006, Traci decided to run for Mayor of Grapevine and Husband hired Mike Taylor as her campaign consultant. Soon his wife began to grow distant. In 2008, Husband came home from a trip a day early. His phone had died so he was not able to notify his wife. When Husband arrived home, he knew something was amiss. Suspecting his wife was cheating, he took the panties she had been wearing to a lab for analysis. The lab identified male and female secretions. Husband confronted his wife, Traci, with the results.

Traci accused the couple’s young daughter of borrowing her panties and having sex with a boy. Traci later persuaded her daughter to sign an affidavit saying she borrowed her mother’s panties. Husband didn’t believe this and wanted to clear his daughter’s reputation so he had further testing done which confirmed the secretions did indeed belong to his wife, Traci Hutton, and not their daughter. This testing also confirmed the presence of saliva and semen in Traci’s panties.

Husband hired an investigator to determine who the male semen and saliva belonged to. The DNA from the semen in the panties was a match to Colleyville City Councilman, Mike Taylor, who was and remains married to another woman. The testing results “imply intercourse within 6 hours of when the panties were worn” between Traci Hutton and Mike Taylor. Husband divorced Traci shortly thereafter. She now goes by Tracy Hutton. It is believed Mike Taylor’s wife was and still is aware of her husband’s ongoing, 8 year affair with Traci Hutton. Mike Taylor is currently helping his mistress, Traci Hutton, with her campaign for judge and went so far as to put both his and his wife’s name down as endorsing Traci for judge. Perhaps this type of behavior is OK with you, but to others it’s disturbing and not fitting for a judge. Now you know. DNA report attached. 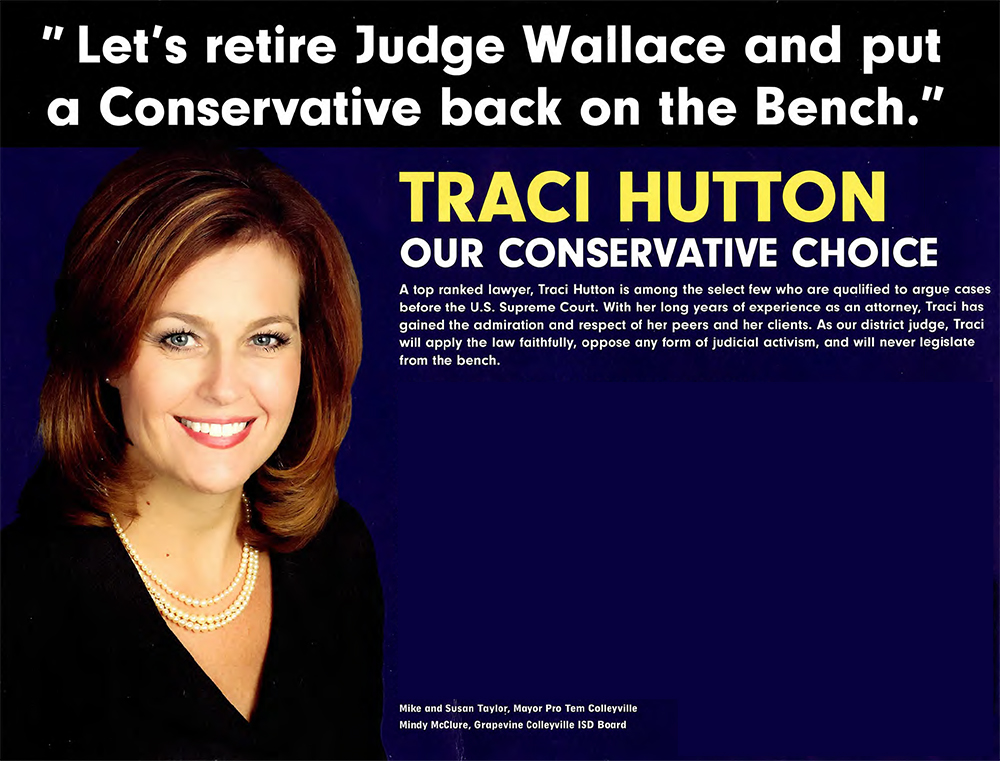 The current Judge RH Wallace, Jr. was contacted by LNO with a copy of the email and requested his comment.  Judge Wallace responded, “I had not previously seen this email, I had no participation in it’s preparation or in its distribution.”

It should be noted that LNO has possessed the DNA evidence, as referenced, for the past approximately 4 years.  LNO  confirms the information, concerning the DNA, in the above email appears to reflect the raw evidence accurately. Although there was a vicious personal attack, falsely claiming sexual misconduct on the behalf of Taylor’s opponent in the most recent City Council election, LNO decided not to publish the evidence in its possession because of the graphic nature and out of respect for the Husband and children.

However, with Traci Hutton’s decision to run for the position of Judge in the 96th District coupled with the vicious attack on her opponent claiming he purposefully ruled in a case that “caused the death of a child,” the time to confirm this information to voters seems the only responsible course of action.

LNO has not included the DNA evidence in this article, but instead, to confirm it’s existence, LNO has provided a link to a public web site with a descriptive scenario of the incident.  Further, while the site does not provide the names; LNO  provides the following from our research of documents from a private investigation firm.
DISCLAIMER -LNO has changed the name of the husband to simply “husband” to further protect his privacy. In addition, as incredible as it seems, Traci Hutton originally apparently blamed the incident on her young daughter and coerced her to sign an affidavit to that effect, that was later debunked by the DNA evidence as stated.   The private reports from the Private Investigation firm can be seen here: Hutton_SSDI.

To see the DNA evidence on a public web site (with names redacted), CLICK HERE. Note the entire DNA evidence is in the possession of LNO and, therefore, confirms the parties included Traci Hutton and Mike Taylor, as the adulterous parties.  In addition, the following video was also obtained from the files of the Private Investigator; LNO did not request the more graphic videos that may have been taken in the home or other private locations. Below video of Hutton and Mike Taylor, ( more graphic images were not presented), the video was in a public location.

Concerning the race for the 96th District State Court Judge. Ms. Hutton received a number of endorsements from recognizable names; that perhaps wish the candidate would have been vetted more carefully. 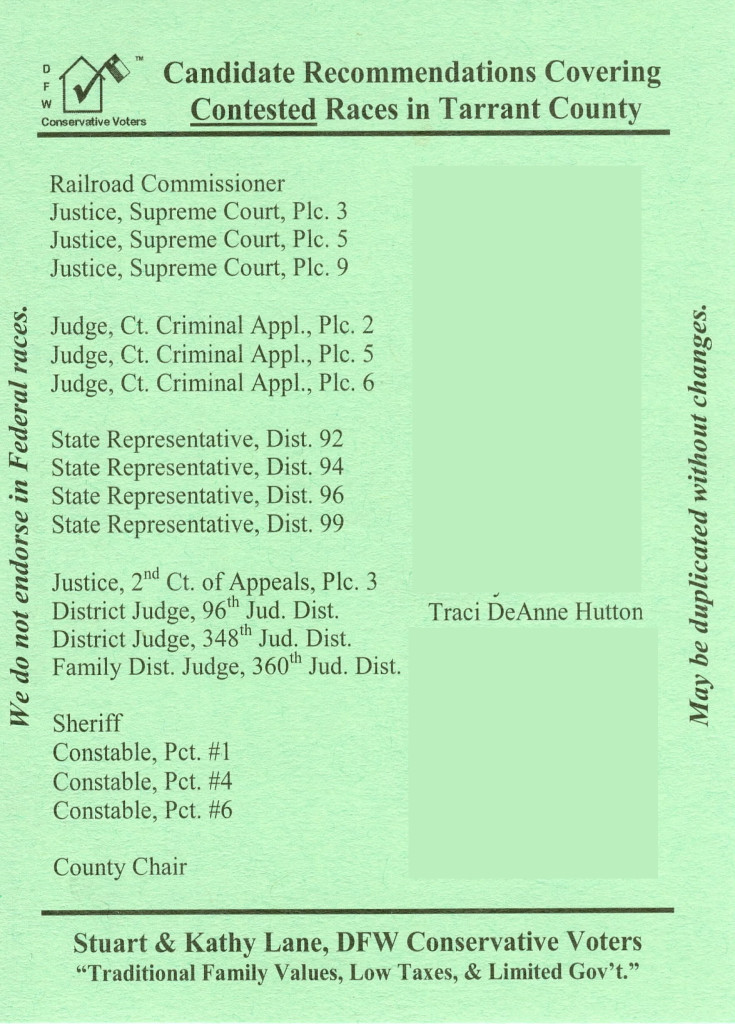 However, one such endorsement came from the famous “Green Card” list of endorsed candidates.  LNO sent the above email to the authors of the Green Card, as it did Judge Wallace, however they elected not to respond.  While many of the candidates are appealing to conservative voters from this source, the lesson seems to be each one needs to be vetted by the voter, not by claimed experts on “Traditional Family Values.”

The most recent mailer of Hutton for Judge is shown here.  Below the mailer is the actual circumstances involved with the case. 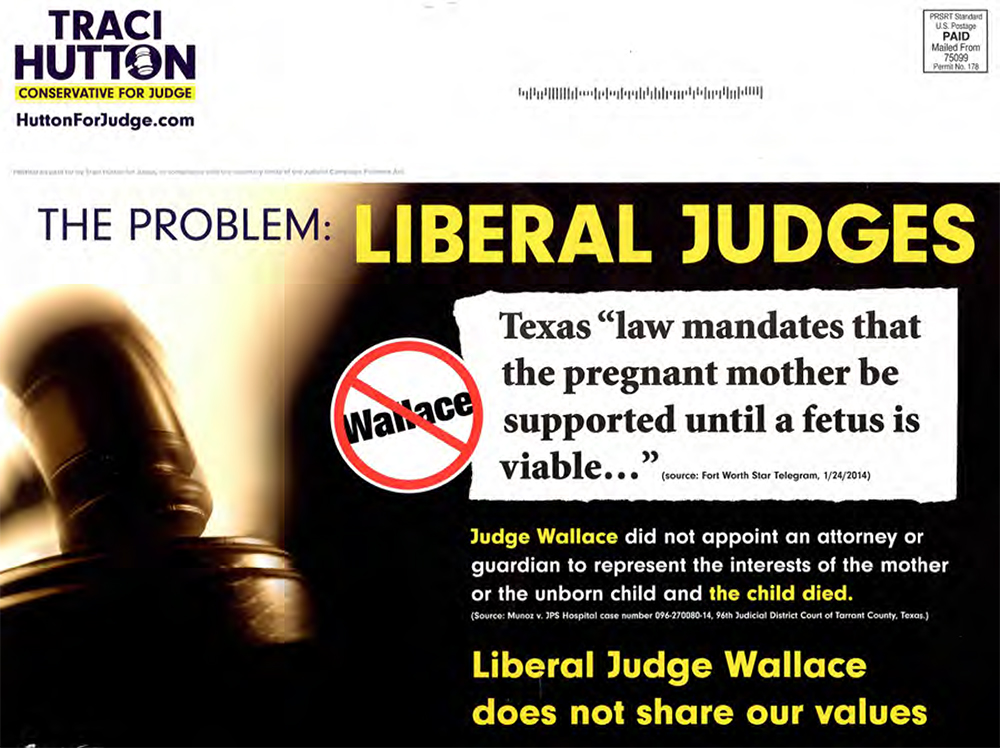 By MANNY FERNANDEZJAN. 24, 2014 FORT WORTH — A Texas judge ruled Friday that a Fort Worth hospital may not keep a brain-dead pregnant woman on life support against her family’s wishes, and ordered doctors to take her off the machines by 5 p.m. on Monday. The ruling gives the family of the woman, Marlise Muñoz, their first legal victory in a two-month battle over the fate of her body.

The judge, R. H. Wallace Jr. of 96th District Court in Tarrant County, ruled that Ms. Muñoz, 33, who has been on life support at John Peter Smith Hospital since November and is now 22 weeks pregnant, was legally dead, agreeing with the family’s lawyers that the hospital had erred in its decision to keep her on life support.

The hospital had said the Texas law addressing life support for pregnant women prevented it from granting the family’s wish, but the judge said the law did not apply to Ms. Muñoz because she is dead. Judge Wallace set the 5 p.m. Monday deadline, saying he wanted to give the hospital time to file an appeal.

Lawyers for Ms. Muñoz’s husband, Erick Muñoz, said they were provided with medical records that showed the fetus was “distinctly abnormal” and suffered from hydrocephalus — an accumulation of fluid in the cavities of the brain — as well as a possible heart problem. The hospital acknowledged in court documents that the fetus was not viable.

In legal filings and in the courtroom, the lawyer for the hospital, Larry M. Thompson, said that Ms. Muñoz met the clinical criteria for brain death two days after she arrived there.

The hearing dealt largely with the blunt issue of Ms. Muñoz’s death. Brain death — the total loss of all brain functions — amounts to a legal state of death. As part of his ruling, the judge ordered the hospital to pronounce Ms. Muñoz dead.

Though Mr. Muñoz did not speak at the hearing, he said in court papers that it has been painful to watch his wife deteriorate from the woman he knew to what he described as a corpse being kept alive against his wishes. “Over these past two months, nothing about my wife indicates she is alive,” he said in an affidavit. “When I bend down to kiss her forehead, her usual scent is gone, replaced instead with what I can only describe as the smell of death. As a paramedic, I am very familiar with this smell, and I now recognize it when I kiss my wife.

In addition, Marlise’s hands no longer naturally grip mine for an embrace. Her limbs have become so stiff and rigid due to her deteriorating condition that now, when I move her hands, her bones crack, and her legs are nothing more than dead weight.” Mr. Muñoz’s lawyers had asked the judge to declare the Texas law unconstitutional, arguing that it violated Ms. Muñoz’s rights under the 14th Amendment to make medical decisions about her own body.

The judge said since the law did not apply to Ms. Muñoz, he would make no ruling on its constitutionality. Ms. Muñoz, who was trained as a paramedic, lived with her husband and their 15-month-old son, Mateo, in nearby Haltom City. She was at home in the middle of the night on Nov. 26 when she collapsed from an apparent blood clot in her lungs. She had gone to the kitchen to prepare a bottle for Mateo. Her husband later found her on the kitchen floor. She had stopped breathing, but was alive when she arrived at the hospital, according to court documents. Her parents and her husband’s lawyers said she was not breathing for an unknown length of time, possibly as long as an hour or more, which severely harmed the fetus by depriving it of oxygen.