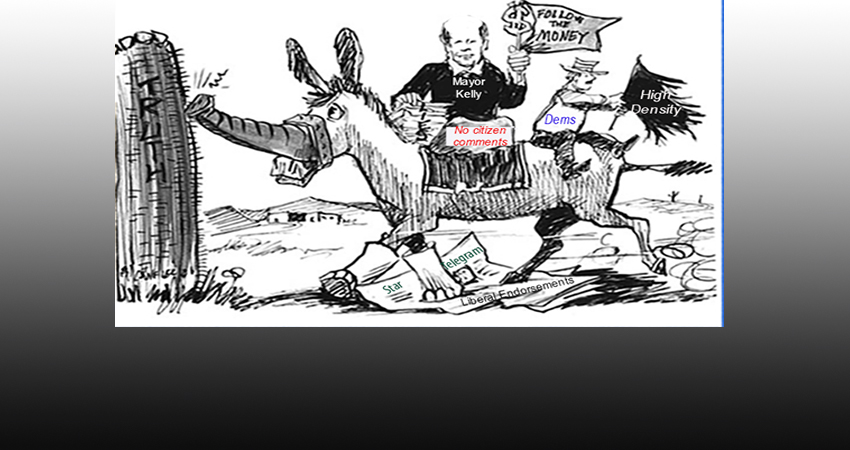 Are voters getting “punked” by Donkeys in Elephant Clothing?

With the Colleyville City Council election looming on the horizon; it has become very apparent that there have been a number of “conversions” over the past few years with party affiliation in Colleyville.

For example, we have the Democratic Activists in town; Mark Bauer and Jim Fletcher in particular.  While Tarrant County is a hardy RED and these folks are clearly out of step with the base convictions of the majority of conservative voters; at least these worthy opponents don’t hide behind PACs and pretend to be Republican loyalists.  They profess and stand on their liberal beliefs about big government and other left wing philosophies, so while we disagree, at least their misguided paths are made obvious to all.

However, examining last year’s election and observing the shenanigans already being put out this year; we have a third group, the “masqueraders.”  For example, Councilman Chuck Mogged, whom, even after moving into our Red State, found it impossible not to vote in the O’bama/Hillary contest in 2008.  He thereafter. apparently was approached by an angel on an elephant one night and decides to vote in the Republican Primary at the same time he runs for a council.   Now Mogged’s sudden conversion from left wing to conservative Republican has him running for Precinct Chairman with State Representative Giovanni Capriglione walking his Precinct during the primaries.

Others that show up for the purpose of disrupting a Republican Club meeting; that claim on Social Meeting they have voted in numerous GOP primaries, and for Presidents (doesn’t say which ones), when in fact the voter’s rolls confirm otherwise.

Now we have they so-called “Protect Colleyville PAC”, putting out silly cartoons on their website about “Radical right wingers trying to seize the City Council election!”  Voters in Colleyville should look behind the scenes in the filings of this PAC, that is what little it has done, to find that the individual sending out the right wing warning was no less than the Louis Miller., whom, according to initial reports, “Loaned” the PAC more than $10,000!  The PAC’s alleged new Treasurer has voted in one GOP primary, according to the voter’s rolls, while the spouse continued to vote in Democrat primaries.

This is not an attempt to make a non-partisan election a partisan conflict.  However, the tactics used are mindful of protesters that show up screaming about Free Speech while they disrupt others.

However, the Texas Ethics Commissions demand that the PACs play by the rules established for fair campaigning in the State of Texas.  LNO has learned that an official complaint has been filed on the “ProtectColleyville” PAC, among the violations are the following:

Voters will have to decide if this type of activity is worthy of obtaining your vote.