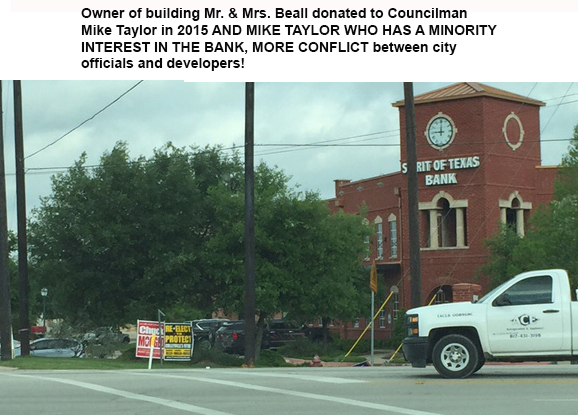 Councilman Mike Taylor owns a interest in Spirit of Texas Bank and Landlords donated to Taylor’s Campaign in 2015..another conflict?

Well, as it might be said, “If you keep digging eventually you will get to the skeleton.”  LNO has learned that COUNCILMAN MIKE TAYLOR has a minority interest in The Spirit of Texas Bank.

In addition the owner’s of the building where the Spirit of Texas Bank leases it’s space,, BEALL LEGACY PARTNERS LP .  Mr. & Mrs. Beall donated to Mike Taylor’s 2015 campaign and FINALLY COUNCILMAN MIKE TAYLOR OWNS A MINORITY INTEREST IN THE BANK! Perhaps another cozy relationship between council members and developers?

Once again raising concerns about developers and Colleyville council members having a conflict of interest in Colleyville.  While Chuck Mogged, Carol Wollin and the ProtectColleyville PAC all have large signs on this property, it appears the connection to council members is undeniable.  On the other hand this developer refuses to allow the competing PAC PreserveColleyville or the challengers, Richard Newton for Mayor, Tammy Nakamura Place 1 or Bobby Lindamood Place 2 for placing anything that might break through another conflicting relationship in Colleyville’s current David Kelly Administration.

April 28, 2016..Posted by a Colleyville Citizen: , I want you to know I took it upon myself last week, while dining at Palio’s Pizza at this location, I went upstairs to Mr. Beall’s office and asked if I could place our signs on the property since they had opponents signs displayed. The lady at the front desk (upstairs at the executive offices – property owner) told me probably not. I asked her to check with Mr. Beall. I was hoping to meet him, but that didn’t happen. She came back to her desk and told me he had more signs out than he wanted. So, clearly, he is in the tank for the incumbents! Therefore, it is apparent that the bank is not the entity that allowed only Mogged signs to be place in front of their facility. One would think the bank would protest the obvious impression this has concerning their independent business. Appears a landlord is overstepping his bounds allowing “peaceful” occupation of a space leased by a tenant.

That comment got us to thinking about businesses, this week it was banks in Colleyville, and political signs.  We called and/or sent an email with the following question to 7 banks in the city; when Spirit of Texas Bank did not respond, LNO starting digging for more information. 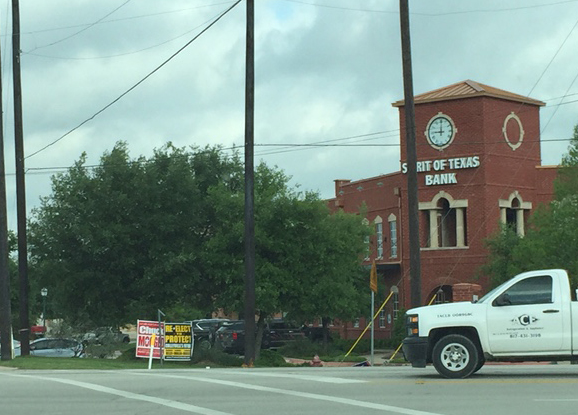