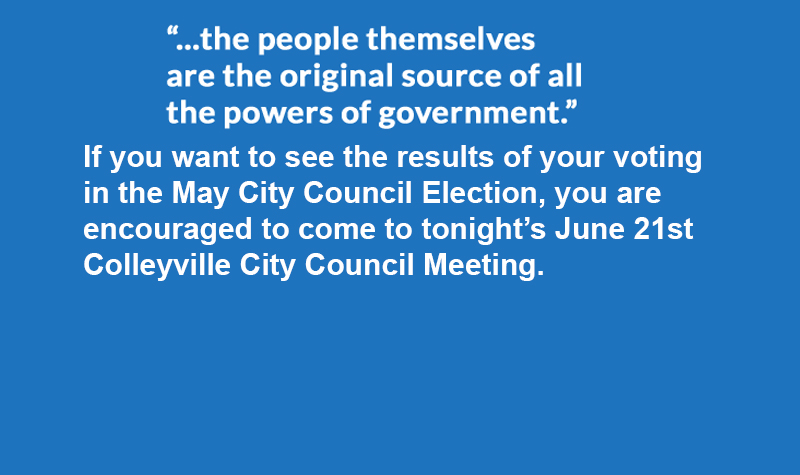 As Council Member Mike Taylor was quoted after the 2015 City Council election; “Elections have consequences.”  Perhaps he did not anticipate the resounding results in 2016 that virtually removed the obstacles and road blocks by the previous majority to issues of great concern to Colleyville voters.  In a landslide victory, Colleyville voters turned out the 11 year Mayor of Colleyville and two council supporters for the return of Mayor Richard Newton and New Council Members Tammie Nakamura and Bobby Lindamood.

One of the top priorities; the City’s Water Rate structure, that saw punishing increases in many water bills around the city, will be changed tonight with Ordinance 0-16-1981.  The new ordinance removed the more than $1 million overage the city had incurred last year that was moved into the General Fund, to a base rate of $4.36 per gallon for all users versus the tiered rate that was part of the previous sky rocketing water rates.

In addition, a Resolution approving soliciting for requests for a new City Attorney.  The current City Attorney firm participated in more than $11,000 in fees last year, out of approximately $250,000 in fees, to block, slow down or impede a number of Open Records requests from two citizens.

Also of critical importance is Resolution R-16_4007.  This Resolution continues to fulfill the promise of the new members of the council to establish a City Charter Review Committee to review.  The Charter Committee is anticipated to make recommendations in areas such as; a) Term limits, b.) Ethics Review, c.) electronic voting and clear up other discrepancies in the existing Charter.

Early indications appear that three of the four existing council members, Taylor, Short and Coplen will argue against the proposed nominees recommended for the Committee and other specifics, such as term limits, expected to be the among the charges to the Charter Review Committee from the new majority of City Council.

The battle lines seemed to be forming, with the same council members and citizen vocalists that spoke in favor of the controversial Comprehensive Plan in December 2015; to object to the new elected majority’s decision concerning the direction given by City Council and the members of the Charter Review Committee not supported by the same group.

For those who participated in the May election, making the dramatic change to the majority view of City Council, should attend this meeting to clearly view the differences that remain on City Council and which council members take an opposing view.  The new majority on City Council made promises to the voters and have set out to fulfill these promises.

The new majority of council began immediately to fulfill it’s promises to the Citizens of Colleyville, when at their first meeting on May 17, 2016 the majority passed Resolution R-16-3993 with an official stance opposing the proposed Tex-Rail line.  An approach that had been recommended previously by the new council’s Mayor Pro-Tem, Chris Putnam.