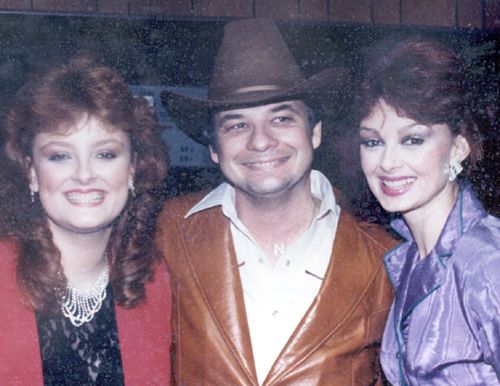 Colleyville Connection to Judd’s First Appearance in DFW Area, but how it all started is the story!

Brent’s daughter Diana came home from school bubbling over with the news. But even after she’d told him twice, he still thought he’d heard her wrong. So he asked her again.

“Like I said daddy, they won’t let my friend compete in the talent show.”

Brent couldn’t believe school officials could do such a thing. Keep someone out of a talent competition? Everyone should be allowed to show off their talent in front of their school and he should know. Brent had a little experience with young people and talent shows.

It just didn’t seem right to him that a high school girl could be deliberately kept out of a school-sponsored, PTA-sanctioned, student talent competition. I mean, the whole purpose of school talent shows is to give kids a chance to be on stage, get a little experience being in the spotlight, and gain some self-confidence.

And really folks, when do most people have the lowest self-confidence? The teenage years, of course. It just seemed to Brent that his daughter’s friend should be allowed to do it, but there really wasn’t anything he could do about it.

Surprisingly, the girl’s own parents didn’t do anything. The girl’s mother was a busy parent too – a single mom working two jobs and raising two children. This was just a bad break, she figured. Kids have to learn to deal with bad breaks.

Here’s where the story takes a rather serious turn. A short time after this, Brent’s daughter Diana – was in a terrible car accident. Badly injured, she was hospitalized for a long time. And though she was in a great deal of pain, she kept a stiff upper lip, and never complained. Diana won the hearts of all the hospital staff. But one member of the hospital staff she got particularly close to was her nurse Ellen.

After a long recovery, Diana did recover and returned to school. It was then that Nurse Ellen summoned up all the courage she could muster, and rang Brent’s doorbell. She said, “Hi! Remember me?” Then she handed him a package and left quickly.

You see, when Brent met Nurse Ellen in his daughter’s hospital room, he didn’t know she was the mother of that little girl who was kept out of the talent competition. He didn’t know what Nurse Ellen was doing to try and turn her life around. But when he opened her package, and heard her homemade cassette tape, he knew why her child was kept out of the competition. She was way too good!

And It’s a Little Known Fact that Nashville producer Brent Maher did what any good businessman would do. He partnered up with Nurse Ellen and her daughter, and made them country music legends! Nurse Ellen – Naomi Ellen – and her daughter Christina. You know them as Naomi and Wynonna – The Judds. Above, LNO Editor Nelson Thibodeaux brought the Judds first appearance in DFW, shortly after hitting #1 in Billboard Magazine for their hit songs, “Why Not Me” and “Mama He’s Crazy.” Seen here with the Judds at the Grapevine Opry in 1983 with LNO’s Thibodeaux.