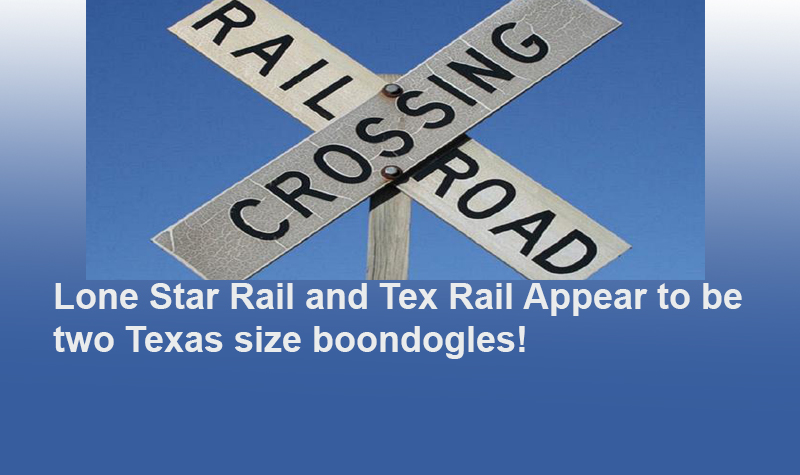 Conley, who chairs the 20-member Capital Area Metropolitan Planning Organization, says it’s time for the fantasy to end.The controversial commuter-rail venture hit a wall when Union Pacific Railroad refused to turn over its tracks to LSR. But advocates continue to pay for a two-year environmental impact statement at a cost of up to $30 million.

“We no longer have a route,” he said. “I don’t believe they have a viable project. To move forward is a waste of taxpayer money.

END OF THE LINE? ”CAMPO pledged $20 million to LSR, with $12 million of that spent thus far. Conley said he will propose that all unspent funds be returned to “close it out properly.” Will Conley, who chairs the Capital Area Metropolitan Planning Organization, will propose cutting off funding of the controversial Lone Star Rail project. The Hays County Commission unanimously opposes funding the 77-mile rail line that would connect Austin and San Antonio. Hays lies between the two cities.

“Lone Star has successfully leveraged about $5 million in local investment into over $50 million in state and federal funding commitments to the project,”John Thomaides, Lisa Prewitt and Scott Gregson said in a joint statement.

“That’s something most taxpayers and business people would ordinarily applaud,” they said.

To date, $28 million has been spent — about 1 percent of anticipated total project costs — on planning, engineering and environmental clearances.

James Quintero, director of the Center for Local Governance at the Austin-based Texas Public Policy Foundation, said the rail venture has turned into “another big government boondoggle.”

Noting that the bulk of the spending has gone to consultants, Quintero said “it’s hard to see how throwing more good money after bad on this project will do anything to provide relief for frustrated commuters.”

Conley, whose county commission district encompasses half of San Marcos, said enough is enough, and the voters know it.

“When all the details are exposed, the overwhelming majority of people I represent will feel comfortable” about pulling the plug on Lone Star, he said.

Since the Texas Legislature did not grant taxing authority to the Lone Star Rail District, the train is dependent on other political entities to supply funding.

“The Legislature ensured there would be accountability, and that’s what’s happening now,” Conley said.

Acknowledging the chronic traffic congestion along the I-35 corridor, Conley didn’t rule out an alternative transit project in the future. It just won’t be Lone Star Rail at its proposed cost and configuration.

“We’re looking for proper planning and competence,” he said.

A national transportation expert calls the proposed Lone Star Rail project between Austin and San Antonio a bust for taxpayers.

Carrying an initial price tag of $2 billion to $3 billion, the commuter line would take over existing Union Pacific tracks near Interstate 35 and shift freight onto new rails to the east.

“This is how absurd governments can be when it comes to rail,” said Randal O’Toole, a senior fellow at the free-market Cato Institute.

“Union Pacific bought 8,000 miles of Southern Pacific tracks for $3 billion. To spend $3 billion for one short line is not in the realm of possibility,” he told Watchdog.org in an interview. 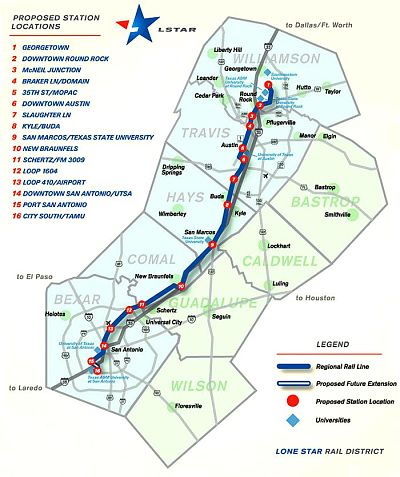 O’Toole likens policymakers’ fixation with rail projects to the continued installation of streetcars in 1915, when automobiles were starting to hit the roads en masse.

“Technological change will overcome congestion,” he said, predicting the evolving generation of new cars could triple the capacity of existing roads, including I-35.

“Once 25 percent of cars have adaptive cruise control, roughly half of all congestion will go away,” O’Toole forecast.

Meantime, the Cato expert maintained no rail system in America can move more people than a two-lane freeway.

Undaunted, the government-run Lone Star Rail District is working with municipalities to form transportation infrastructure zones. Property tax increases within the zones would go toward train operations and maintenance. Sales tax increases are also being considered.

As I-35 conditions worsen, double-deck commuter buses would be a far cheaper and flexible alternative for frazzled motorists, but public subsidies distort transportation-financing models and suppress market-driven competition.

Yet the “free federal money” train rolls on with encouragement from both political parties. In Austin, legislation prohibiting New Starts from funding additional passenger rail projects in Texas died without a hearing last session.

Approved without public hearings, the platforms will be funded by gasoline taxes. “It’s another diversion of road money, and the public doesn’t have the first clue,” Hall said.