For the younger crowd and those who prefer their floats minus alcohol, new Soda Floats are a cool way to get Summery. Choose from any fountain soda, root beer, or one of five flavors of Izze sodas – Sparkling Pomegranate, Sparkling Apple, Sparkling Grapefruit, Sparkling Clementine, and Sparkling Blackberry. 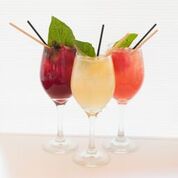 If you’re a wine drinker, SPIN!’s new Summery Sangrias are a deliciously refreshing drink on a hot day. Infused with the flavors of the season, SPIN!’s newest homemade sangrias are served with a frozen fruitsicle (fresh frozen fruit on a stick) and fresh herbs. Try the new Summerberry, Pineapple Peach Basil, or Watermelon mint made with watermelon pureed in-house. Of course, SPIN! will still serve its freshly homemade white, red and blood orange sangrias as well. Summery Sangrias are $5.95 a glass and are available at special prices during happy hour. 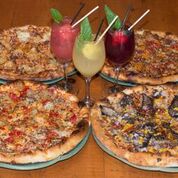 All of the BBQ pizzas are available as 12 inch pizzas, as well as a Mini Mia personal size pizza with a salad, and as a personal Mini Mia size pizza during happy hour.

As always, SPIN! takes the unique step of boosting flavors by roasting its pizza toppings in herbed olive oil in its stone hearth ovens each day. All of SPIN!’s hand-spun stone-fired pizzas can be served on traditional thin-and-bubbly crust, rustic whole wheat, or gluten-free crust. SPIN!’s pizza dough is made fresh daily and its gluten free crust is renowned for its flavor and texture.