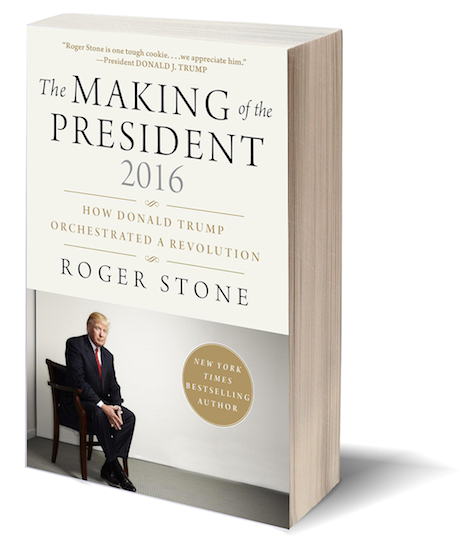 Roger Stone is the author of the New York Times bestseller The Man Who Killed Kennedy. He is a legendary American political consultant and strategist who played a key role in the election of Republican presidents Richard Nixon, Ronald Reagan, and George H. W. Bush. He was also instrumental in the 2000 Florida recount responsible for the election of George W. Bush.

I met Donald Trump through Roy Cohn, the legendary mob and celebrity lawyer, who was an attorney and advisor to the young real estate mogul. In 1979, I signed on to run Ronald Reagan’s campaign for president in New York, among other northeastern states. I was given a card-file that supposedly held Governor and Mrs. Reagan’s “friends in New York” who might be solicited for help. Among them was a card for Roy M. Cohn, Esq. with the law firm of Saxe, Bacon and Bolan. I called Cohn’s office to make an appointment.

When I arrived at Cohn’s brownstone law firm on the Upper East Side, I cooled my heels for about an hour in the waiting area. Finally, I was told to go to a second floor dining room where Mr. Cohn would meet me. He was wearing a silk dressing gown. His heavy-lidded eyes were bloodshot, most likely from a late night of revelry. Seated with Cohn was his client, a heavy-set gentleman who had been meeting with Cohn.

I was face-to-face with “Fat Tony” Salerno, at that time the boss of the Genovese crime family. In October 1986, Fortune magazine would call the seventy-five-year-old Salerno America’s “top gangster in power, wealth, and influence.”

It’s true that as a New York developer, Donald Trump bought concrete from a mob-connected company controlled by Salerno. On the other hand, the State of New York, the City of New York, and most major developers bought their concrete there as well, the reason being their excellent union relationships. The company had a virtual monopoly on concrete, with the state and federal government among their biggest customers. The company was properly licensed to do business in New York State.

After Salerno left, we got down to brass tacks and I pitched Cohn on helping Governor Reagan in New York State. Roy was nominally a Democrat, the son of a legendary Tammany judge, and a quiet power in the New York City Democratic Party.

He was so feared because of his viciousness in the courtroom, that most plaintiffs settled immediately when they learned that Cohn was opposing counsel. Trump used this power with Roy as his attorney.

“So how can I help you, kid? This Jimmy Carter is a disaster. I told Stanley Friedman and Meade Esposito that the peanut farmer was no goddamn good,” Cohn exclaimed. “Ronnie and Nancy are friends from the 1950’s when I was working for Joe McCarthy, the poor dumb drunk son-of-a-bitch. Ronnie stood up to the Commies in Hollywood and was a personal favorite of J. Edgar Hoover.”

I told Cohn I needed to start a finance committee, locate and rent a headquarters, have phones installed, and launch a legal petition-gather­ing effort to put Reagan delegates’ names on the New York Republican primary ballot. Cohn stared out a picture window, then suddenly said, “What you need is Donald Trump. Do you know Donald Trump?” I told the beady-eyed lawyer I only knew Trump from the tabloids. Cohn said he would set up a meeting immediately but Donald was very busy and would only give me a limited amount of time.

Roy also told me that I had to go to Queens first to meet with Donald’s father, Fred Trump. “Fred is a personal friend of Barry Goldwater and has been generous to conservative and Republican candidates and causes. I guarantee you he likes Reagan,” said the twice-indicted attorney. Cohn arranged for me to meet Fred Trump who was a gracious gentleman at a diner in Queens. Roy was right, he liked Reagan.

Following Cohn’s advice, I went to see Donald Trump. At the appointed hour, Norma Foederer, Trump’s longtime gatekeeper and assistant, ushered me into Trump’s office. “It’s a pleasure to meet you, Mr. Trump,” I said. “Please call me Donald,” the mogul said with a smile.

Trump was interested in politics just as he was interested in sports. He was savvy in the use of legal political money and employed a platoon of lobbyists over the years. He had a low regard for Carter and, as he put it, “this George Bush is a dud.”

“You see, Reagan’s got the look,” he said. “Some guys have the look. Sinatra. JFK. And your man, Reagan. People are hungry for a strong leader, as Carter looks vacillating and weak.” Trump asked quite a few questions about polling and agreed to join the Reagan finance committee, raising $100,000, split between himself and his father.

Once The Donald was on board, I heard from him constantly. He wanted the latest polling and wanted to see poll results between Reagan and Carter. Trump would ask in every call “What’s your path to 270?” I would go through the battle-ground states. We became friends.

In 1989, I was working for Donald Trump as a lobbyist in Washington handling currency transaction rules that his casinos were subject to. I believed I had worked out regulatory language acceptable to the regulators, subject to Donald’s approval. I called Donald at his office asking if I could jump what was then the Eastern shuttle from DC to New York and meet him at noon in his Manhattan office.

Donald told me he couldn’t meet because he was leaving for Atlantic City with a group of his executives by helicopter. I convinced him to wait for me, sending the executives on ahead and having the chopper return to pick up Trump and bring him to Atlantic City later. Shortly after I was ushered into Donald’s office, his ashen-faced assistant Norma Foederer told Donald that New Jersey State Police Superintendent Clint Pagano was on the phone. Trump put him on the speaker.

“I’m sorry to say that the helicopter your company chartered crashed in the pinelands and everyone aboard was killed.” “Are you certain?” Trump asked. “One hundred percent,” said the veteran cop.

The women at the Trump Organization were openly weeping with Trump losing Steve Hyde and Mark Etess, his two top gaming executives. Hyde was a Mormon with twelve children and a pleasure to work with when I represented the casino company on a few issues.

Donald had Norma place calls to the widows. He spoke to each of them and, in some cases, Trump’s call about their husband’s death was their first news of the cataclysmic event. While Trump may have booked other appointments after mine, I know that his life was spared to save our Republic and restore our economic vitality.

I still have a letter Norma Foederer, for many years Donald’s executive assistant, wrote to me after this awful day. “I tremble to think what would have happened if you hadn’t called and he hadn’t changed his schedule that day “…she wrote.

Trump was repeatedly implored by state Republican leaders to run for governor or mayor. In 2006, for example, the New York State Senate Republican’s wily leader Joe Bruno convinced the New York State Independence Party, which controlled a valuable ballot position, to announce that they would cross-endorse Donald Trump for Governor if he would seek the Republican nomination. It was a hot story for twenty-four hours, until The Donald threw cold water on it. “I always thought he should have let it run a while,” said Bruno, “but now I understand the job was too small for him.”

“His timing of running [for president] in 2016 allowed him to take unique advantage of a perfect storm when it comes to voter disenchantment and the widespread belief that the system is rigged against the little guy. Sure, he’s sometimes crude but his voters love it. It’s like sticking your thumb in the eye of the establishment who have run the country into the ground,” said the ex-prizefighter.

Donald has a wicked sense of humor and is enormously fun to hang out with. He has always had an exceptional eye for female beauty. He has the same eye for architecture, preferring towering buildings with clean lines, the best materials and always large signage. His construction standards are above and beyond industry norms and he has always enjoyed a good relationship with organized labor, which is particularly important in Democrat-dominated New York City.

Notwithstanding the glitter and gold of his buildings, there really is nothing fancy or pretentious about Donald Trump. He likes meatloaf, cheeseburgers, and diet coke. He thrives on a steady diet of cable news. He’s a billionaire who isn’t elite or pretentious. He can put anyone at ease with a genial manner.

While the rest of the country may have been fooled by his genius, I, in fact, knew that he had quietly trademarked the phrase “Make America Great Again” with the US Patent and Trademark Office only days after Romney’s defeat. He told me on New Year’s Day 2013 that he was running for president in 2016. When I pointed out that some in the media would be skeptical that he would actually run based on his previous flirtations with public office, he replied, “That will disappear when I announce.” And so it did.

The Making of the President 2016, by Roger Stone