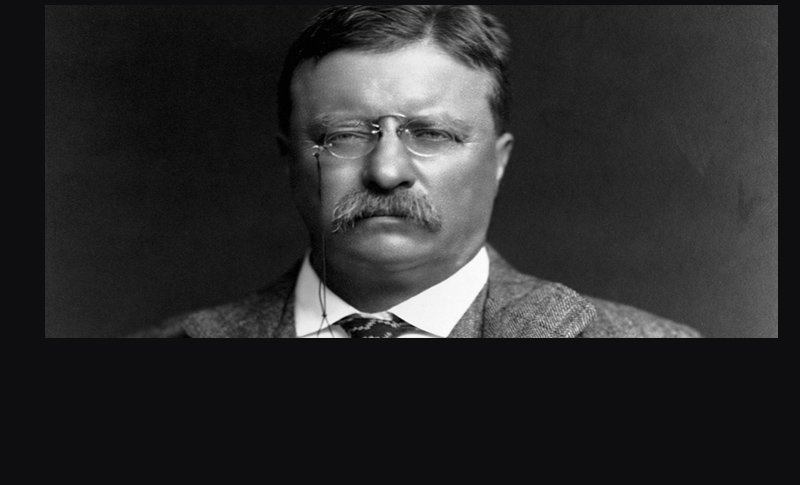 Theodore Roosevelt was one of most dynamic Presidents in White House history, and on the occasion of his 158th birthday, here are 10 fascinating facts about the 26th President. Roosevelt came from a wealthy New York family, but he didn’t take an easy path through life. Born on October 27, 1858 in Manhattan, Roosevelt survived the tragedy of losing his wife and his own mother to illness on the same day in 1884, an assassination attempt in 1912, and an extremely dangerous military charge in Cuba in 1898.

The former President passed away in 1919 at the age 60 from a blood clot that had lodged in his heart. He had been in declining health for several years.

Here are some interesting facts about the most dynamic of American Presidents.

1. As a child, Roosevelt witnessed the Abraham Lincoln funeral procession. There is a photo of the young Roosevelt perched in a window watching the procession in New York City in April 1865 that surfaced in the 1950s. Young TR and his brother were at his grandfather’s mansion.

2. Theodore Roosevelt had a really, really good memory. Roosevelt claimed he had a photographic memory, but it is a statement that can’t be easily proven today. But biographer and historian Edmund Morris cited several documented cases where Roosevelt was able to recite obscure poetry and other content well over a decade after he read the documents.

4. The Republican leaders really didn’t want Roosevelt as President. As a young Bull Moose Republican in politics, TR had angered top GOP honchos by refusing to appoint Republicans to bureaucratic positions. Party bosses Mark Hanna and Thomas Platt were able to “kick Roosevelt upstairs” as the vice presidential nominee in 1900 for the incumbent President, William McKinley. Roosevelt agreed because he was thinking of running for President in 1904. No one thought that Roosevelt would take over for McKinley later in 1901.

5. Roosevelt was the first President to win a Nobel Peace Prize. As President, Roosevelt adopted an aggressive foreign policy, but he also saw America as deserving a role as a global peacemaker. In 1906, he convinced Japan and Russia to attend a peace conference in Portsmouth, New Hampshire to end their conflict. TR was awarded the Nobel Peace Prize for his efforts. Roosevelt also settled a dispute between France and Germany over the division of Morocco.

6. Roosevelt was a prolific writer. Aided by his excellent memory and his always-high energy level, TR wrote about 35 books in his lifetime and an estimated 150,000 letters. And he did write an autobiography!

7. He was also the father of the modern U.S. Navy. To say Roosevelt was obsessed with naval power would be an understatement. As an undergrad at Harvard, Roosevelt’s scholarship on the U.S. Navy during the War of 1812 is still cited today. He also served as the Undersecretary of the Navy as the conflict started with Cuba in 1898, and he sent the American navy on a worldwide tour in 1907 as a show of strength. And then there was his ultimate naval power achievement: the Panama Canal.

8. Roosevelt was a grad college dropout. While Roosevelt graduated from Harvard, he left law school at Columbia without receiving a degree. Roosevelt had become focused on local politics and lost interest in a legal career.

9. Roosevelt was blind in one eye after a boxing injury in the White House. The President continued with his hobby of boxing well into his presidency. He suffered a detached retina in a bout in 1908, and stopped fighting. He switched to jiu-jitsu instead.

10. What is the deal with the Teddy Bear? While on a hunting trip as President, guides in Mississippi had arranged for Roosevelt to shoot an old bear they had tied to a tree. Roosevelt refused to do so, on sporting grounds. (Instead, he had someone else shoot the bear.) The first part of the incident became a newspaper cartoon, which then inspired a shopkeeper to sell stuffed bears, with Roosevelt’s permission.