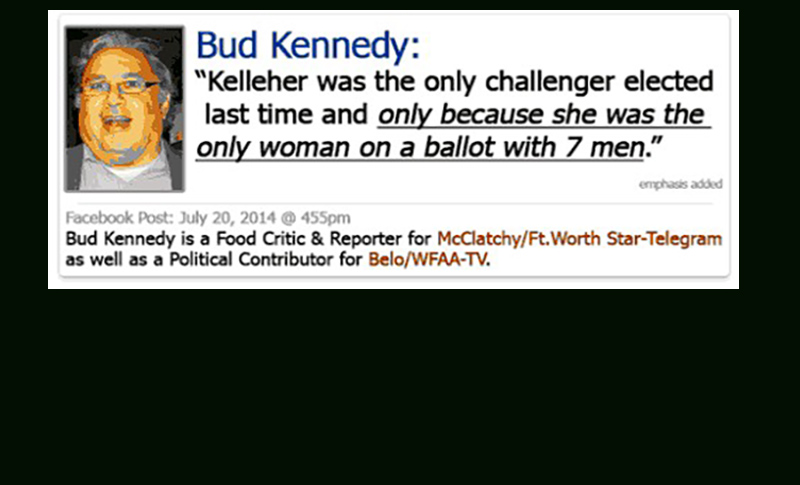 Are you Really Interested in the opinion of the guy who said “The Only Reason the Challenger was Elected is Because She Ran against 7 Men?”

In the Sunday April 23rd Edition of the Star-Telegram, on the editorial page, was political insight from the S-T’s Resident Food Critic/Political Pundit, Bud Kennedy.  In 2014, on Kennedy’s Facebook page, was this same insightful political pundit, Bud Kennedy and his analysis on an election taking place for the Board of Directors of the Tarrant Regional Water District.

However, for this year’s May 6th election, the same Editorial Board of the Star-Telegram, wildly endorses the same Mary Keheller, to be re-elected to that same position. The Endorsement headline, “Keep ‘squeaky wheel’ on water district board.”  Director Mary Kelleher, 54, of east Fort Worth, is the “squeaky wheel” on the board. She was a constant contrarian and board critic when elected four years ago. 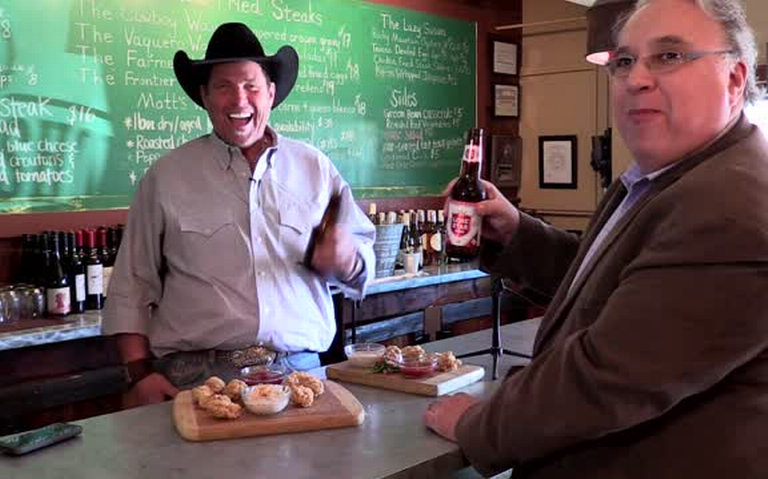 On right in Photo, Bud Kennedy, S-T’s Food Critic and Editorial Guru.  Is it possible that Bud Kennedy, and his editorials, are the  reason why many conservatives say “cancel my subscription” to the liberal Star Telegram?

Is it possible that the vision and rationale, as indicated in a record turn out of Colleyville voters in the last two elections, is just as sound, if not more so, than Bud’s intellectual analysis that voters should ignore partisan politics in local elections?  So why am I reading the Sunday S-T?  Well because it is the only edition I take.  You see they do tend to get all the information and times right on the weekend’s sports schedule on television!  But alas, I turned to the Editorial Page because the Headline caught my eye, “Democrats, Republicans try to make local elections partisan.”

The Editorial states the Republican Party, as well as, the Democrat Party  sent out emails concerning local candidate’s previous primary voting tendencies. The Democrat mailer however “only identifies candidates who “requested” a party designation,  that is, “if they requested to be listed as a Democrat,” apparently meaning that most who were filing DID NOT want to be identified as a Democrat or voting in the Democrat primary or for recent Democratic Presidential Candidates.

The complaining party, however in the Bud article, was a candidate that was miffed her only opponent was listed as a Democrat and she wasn’t “highlighted”  as one; no mention of a Republican candidate.  The Democrat candidate followed by the statement that, “At what point did it become acceptable to call someone a ‘Republican’ or ‘Democrat’ as an attack on their character? Apparently in her case a heck of a lot, because in her  Democrat leaning district, her main complaint was she did not get mentioned as a Democrat

Somewhat interesting that Bud took this topic to weigh in on the Sunday prior to the upcoming May 6th election.

LNO  had posted  What Texas Does Not Really Have is “Non-Partisan” Municipal Elections, an Editorial by Nelson Thibodeaux , as well as posting the Tarrant County Republican Party’s email concerning voting history of candidates, which is referred to in Bud’s editorial.

Bud’s conclusion; ” If you only see a person through the lens of their voting history, then I feel sorry for you because you are missing out on some great people. We need leaders for our cities and schools. not for a party?”

Consider that approach with the rationale of the statement by the Tarrant County Republican Party’s Chairman, Tim O’Hare of Southlake; ” We are concerned about too many liberals–too many tax-and-spenders are getting seats on our school boards and city councils.  This is one way we can address that.”

So is  attacking the character of someone the same as wanting to understand an individual’s basic philosophical approach to government?  After all this tends to be typically best exhibited by who they align themselves with nationally or even more importantly during presidential elections?  I think not, after all, as Tip O’Neal once said, “All politics is local,” and those who  serve at the local government level and school district are more likely to impact one’s daily life as much or more than a decision on who to vote for President.  Do you really want someone who thinks the O’Bama Administration made for great government running up the national debt more than all the rest of  the past Presidents in our history?  Or did you prefer the email lady who lied about Benghazi and the resulting loss of life by brave Americans?

Either way, are you a “Party Racist”,  if you, as an informed voter, simply want to know what is the basic core political philosophy of the candidate you are being ask to vote?  If they voted for O’Bama, as it is has been reported that Mike Sexton did, or voted for Hillary in the last Presidential election, as Jon Bullock has admitted, then you are perfectly within your reasonable right to question how that type of reasoning will serve you best on Colleyville City Council.