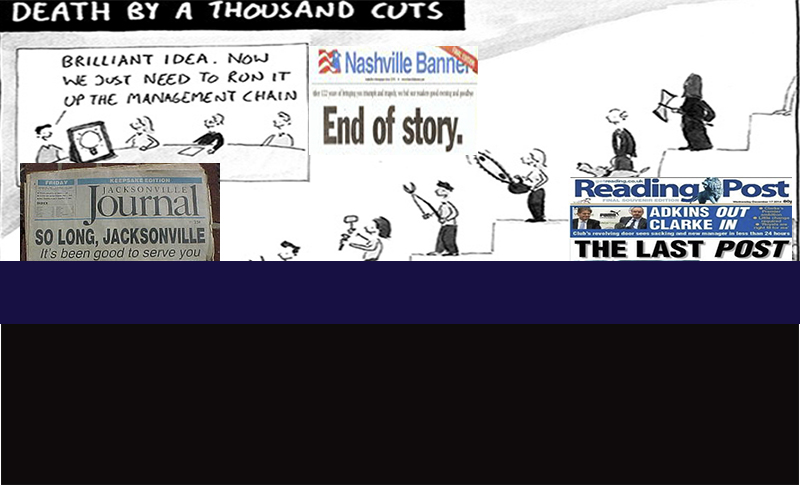 Why more online locals like LocalNewsOnly.com?  Because local newspapers are disappearing from the scene.

As long as there have been big corporate newspaper chains answering to the stock market rather than independent, family ownership, newsrooms have braced for “layoff season” — coming right before the start of a new fiscal year, or immediately following.

A far more brutal round of layoffs comes after a local, family-owned newspaper is acquired by one of these companies. And that’s happened at increasing frequency over the past few years as Gannett and Gatehouse have gone on buying sprees.

But also in the past few years, we’ve seen “layoff season” become year-round.

Gannett eliminated newsroom jobs across the country on Wednesday, at as many as 37 local newspapers, according to one employee. Already-lean small town newsrooms were hit the hardest — papers such as the Times-Herald in Port Huron, Michigan, the Reporter-News in Abilene, Texas, the Daily Record in York, Pennsylvania, and the Sun-News in Las Cruces, New Mexico.

These layoffs didn’t coincide with the start of a new budget, or the cost-cutting that comes after an acquisition. And they followed other rounds of layoffs at various Gannett properties that have happened on an almost-monthly basis so far this year. They did come after a first quarter earnings report showed print ad revenue down 17.7 percent and circulation revenue down 8 percent.

The other thing about these layoffs, and the previous rounds of cuts so far this year at Gannett, Digital First Media and other companies, is that for the most part, they aren’t being written about or tracked by reporters and watchdogs who cover the media industry and the state of journalism. There were numerous articles on Wednesday about Facebook, Snapchat and video, and the now-daily reflections about the “fake news” problem, but nothing about havoc being wreaked on dozens of local newsrooms across the country.

Editors are prohibited by small town newspaper publishers — or corporate directive, or both — from writing about the layoffs in their own newsrooms. Jim Romenesko is retired. And one has to wonder whether companies such as Digital First and Gannett have switched to making a handful of layoffs every few months versus annual bloodlettings in part to avoid calling attention to the cuts. Or maybe there’s been just so much cutting, for so long, that media reporters are weary of writing the same old story.

But it raises some big questions about Gannett, Digital First (which is laying off newsroom staff in the Bay Area on the heels of a Pulitzer Prize), Gatehouse and other companies who are in the journalism business but are primarily driven by the short-term profit goals of shareholders or hedge funds. They own hundreds of local newspapers that have been vital to their communities — in the past, at least — but whose journalistic vitality or very existence is not necessarily important to, or even part of, the business plan or “exit strategy” of their owners.

We’re seeing a resurgence of interest in and respect for quality journalism in this country following the election of President Trump, unprecedented attacks on objective truth, and increased civic engagement. The New York Times has seen a huge increase in subscriptions, the Washington Post is investing heavily in stronger journalism, and is seeing greater financial success, and support is pouring into nonprofit news organizations such as Pro Publica and numerous local online news sites.

So why is Gannett moving in the opposite direction? Well, its ownership, of course, regardless of how you see the chicken and egg equation: Does a company like Gannett cut newsrooms despite “reader support,” or are readers not supporting them the way they do independent news organizations because of their cuts?

That’s why “support your newspaper because local journalism is important”isn’t as simple a proposition as it sounds. Because what if the ownership of your local newspaper is the biggest threat to the continued existence of watchdog journalism in your community?

A lot of people with innate talent for journalism, experience gained by years of service in the newsroom, and deep knowledge of their communities were laid off Wednesday. For the most part, they have three choices — move away from the community they know to try to find a job in journalism elsewhere, leave journalism, or start their own journalism enterprise.

The first two choices won’t help the local news situation in communities hit by Gannett’s layoffs Wednesday. Launching your own local journalism organization, or joining with others to start something, isn’t the easiest route, but can be the most rewarding. LION, which supports local independent online news publishers, stands ready to help.

Many laid-off journalists and community-minded business leaders who recognize the importance of local news are going this route. LION has 150 members in 37 states, many of which are operating in communities served by Gannett dailies that no longer do significant local watchdog reporting.

Gannett won’t be coming back into these towns to restore local journalism jobs. But we have all of these talented reporters, editors and photographers who care deeply about their communities. Support them in efforts at grassroots journalism entrepreneurship. They hold the best hope for replacing these continual cuts to local journalism.

INBOX: “We weren’t allowed to publish [the news], so I thought I’d share: There were ‘staff reductions’ at 37 Gannett publications today.”