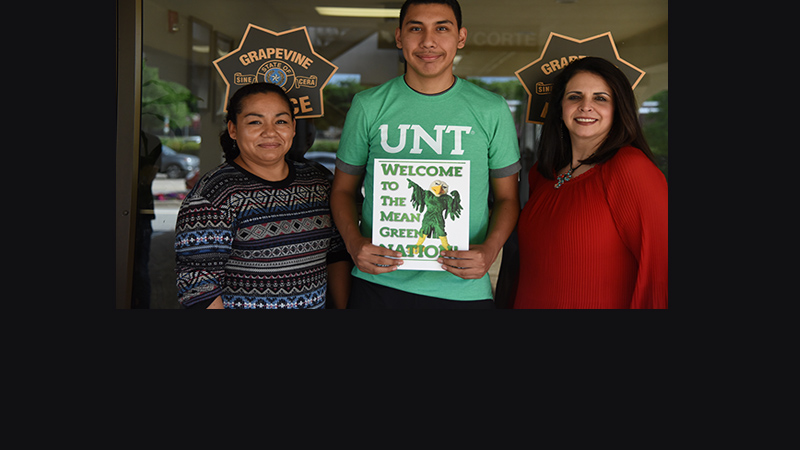 A Grapevine High School senior will become the first person in his family to attend college, thanks to AT&T’s Hacemos and the Grapevine Community Outreach Center.

Sporting his new UNT t-shirt in the Mean Green colors, Miguel Gomez proudly shows off his acceptance letter from the University of North Texas.

“I am so excited that I got accepted because it means all that hard work paid off,” explains Gomez.  “I wanted to go, but didn’t know how to get there.  I didn’t think I could get in.”  That’s when Gomez’ mother, Nicolasa, learned about a workshop hosted by Hacemos, an AT&T group consisting of workers who provide student mentoring, among other things.  She signed up her son, and things progressed quickly.

Fort Worth Chapter President Claudia Murga spoke about the “Road to Success Say Yes to College” program, to show high school students that college truly is within reach.  The workshop convinced Gomez to go for his dream, and committed the next year to the college program.  Volunteers worked with Gomez every Sunday for a year, sometimes as long as eight hours at a time, to help him get accepted into college.

The program creates a partnership between parents and the school, so the entire family became involved in helping Gomez raise his grades and boost his SAT score.  Gomez says the most difficult steps in his journey were the SAT preparations.  “In the beginning, Miguel was frustrated because he was missing time with his friends,” remembers mother Nicolasa Gomez.  She says it got better when he started seeing results.

Murga praises the entire Gomez family for their commitment and dedication to Miguel’s success.  “We are so proud of Miguel’s parents for their support.  We would work with [Miguel] starting at 2:30 in the afternoon, and sometimes we would be there until 10:30 at night!”

Miguel would have never learned about the college program had he not been a volunteer for VAST, or Valuable After-School Time, the after-school program at the Grapevine Community Outreach Center.  He joined to be near his brother Jordan, a sixth grader in the program.  Jordan seemed hesitant about going to college himself, but one look in his mother’s eye reveals, he is facing a bright future himself.

Miguel earned scholarships for most of his expenses, including tuition.  However, he is still searching for about $1500 to cover things like books.  Miguel says he is ready to work hard this summer to make the money, and is eager to attend orientation.

He chose the University of North Texas for its programs in architecture and engineering.  He was torn between the two fields, but when an architect spoke with him on career day, he made his decision.  Now, as he constructs his future, he is also building up new dreams for his peers.  He tells people, “if you don’t know how to get into college, this program will help you get where you want to go.”  Hacemos laid the foundation, but Miguel built his future.  And it’s a beauty.