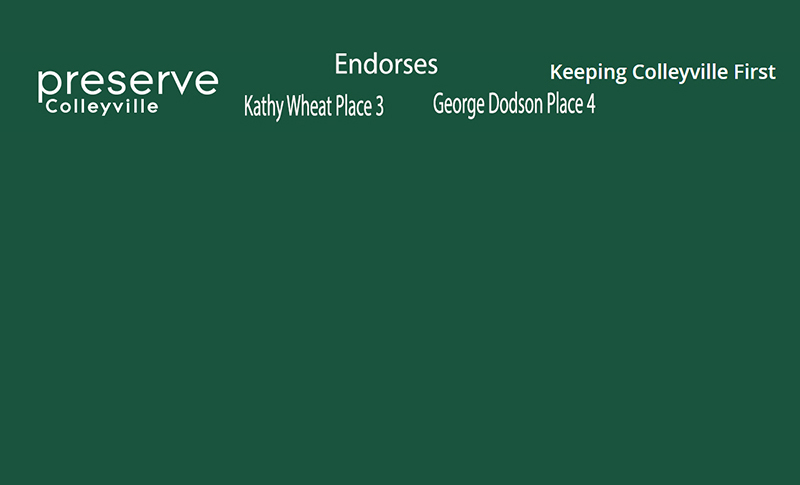 LNO received the following statement from Dennis Johnson, the Treasurer of the PAC Preserve Colleyville.  Dennis Johnson and the related PACs he has served  have been a net positive in not only supporting elected officials, but in much more community efforts as noted below:

“It has come to my attention that Mike Sexton, Candidate for Place 4 Colleyville City council has declared on a number of occasions, including Facebook Posts, that he has the support of both the PAC Protect Colleyville as well as Preserve Colleyville.” stated Johnson

“As the Treasurer of Preserve Colleyville, I can say unequivocally the PAC has endorsed only Kathy Wheat for Place 3 and George Dodson for Place 4,” Johnson continued.

“Preserve Colleyville supports George Dodson over Mike Sexton or Chad LaPrelle in the race for Place 4 on Colleyville City Council. Dodson has served on numerous committees and is currently the Chairman of the Planning and Zoning Commission. As such, Preserve Colleyville is of the mindset that he is the most qualified running for this position.   The PAC, as well supports Kathy Wheat as the right choice in the race for Place 3 against Jon Bullock.  The Political Action Committees led by Preserve Colleyville, again this year, has continually to set a precedent in making Colleyville a more viable and safe city.  Not simply showing up at the next election trying to wrangle a City Council Seat,” said Dennis Johnson.

Dennis Johnson has been an activist in Colleyville issues for at least the past 17 years, including the vote that established the Colleyville Crime Prevention District, responsible for the new Justice Center/Police Station, as well as ongoing financial assistance to the department.This has contributed to Colleyville’s safety record.

As featured in LocalNewsOnly.com in 2003 is a photo of Dennis Johnson, then Treasurer for the PAC known as CAN that was instrumental in working to set up the first Crime Prevention District in Colleyville in a vote of 2,201 for vs 460 against.  This was to renew the program for the Crime Control and Prevention District. 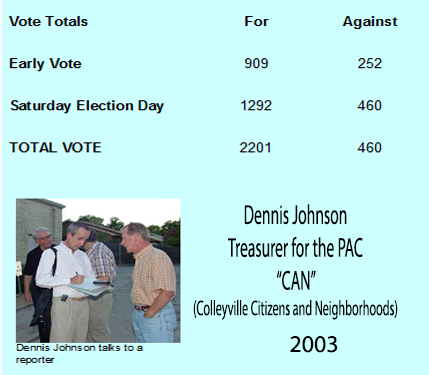 Colleyville CAN Treasurer, Dennis Johnson talks to a reporter after the voters gave overwhelming approval to extend the Crime Control Tax District in Colleyville. Colleyville CAN supported the renewed district with a rally of former elected officials and local advertising.  According to Johnson, Colleyville CAN is a registered political action committee.  Seen in the background are former Mayor Ed Baker and former Mayor Pro Tem Smokey Vanover, both identified themselves as members of Colleyville CAN. 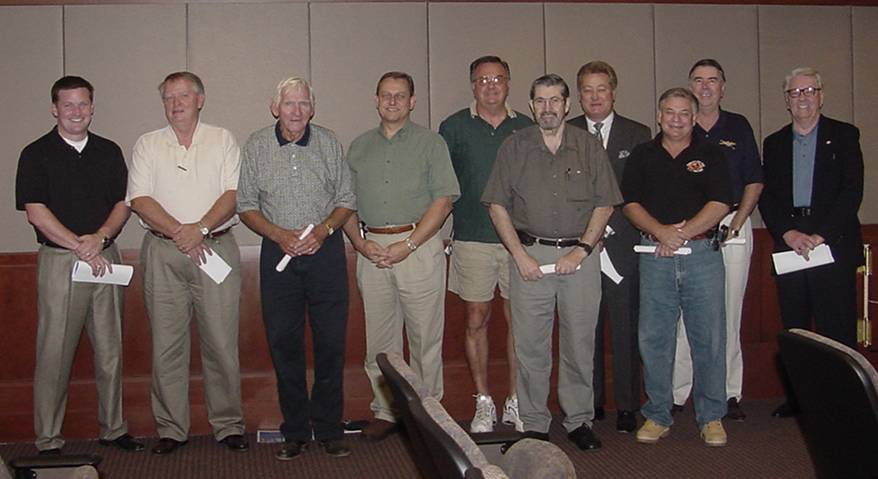 Then there was the $34.4 million bond issue in 2005, when the PAC supported the concept of building new Fire Stations for Public Safety, but opposed millions of dollars to bury the power lines of the utility companies at taxpayers expense. If all 6 issued would have past the result would have resulted in more than a 40% city tax rate increase.

In 2005 LNO covered a proposed Bond election and Dennis Johnson, the Treasurer of PAC CAN,  took on the $34 million plus proposed bond issue. That would have caused a city reportedly increased the city tax rate by more than 40% to retire the bonds, if all issues had passed on a citizen’s vote. 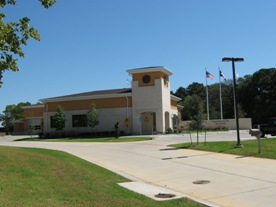 Through their  website and in a press release, CAN says it is not against the new Fire Station, on the contrary the existing Bond schedule puts out the station until 2008.
The site states, “Due to the structure of the Bond Issuance, monies would be available at the earliest 2008 through 2010. CAN feels this issue should be defeated because WE NEED PUBLIC SAFETY NOW!” Note: the Fire Station was the only issued  agreed to by the voters out of 6 propositions. Photo on left is new Main Fire Station for Colleyville.

Even in 2005 the Dennis Johnson lead PAC made the following statement; that is still a hot issue in Colleyville 12 years later;

“Over the past five years, city streets have been neglected in our general budget and now many neighborhoods need immediate repair. Public safety, such as a new central fire station and warning sirens, have been a low priority in lieu of millions of dollars for public buildings such as a new city hall and library, ” said Johnson.

Officer Gary Moore stands in front of the brand new Volvo XC90 SUV arranged by Colleyville CAN Treasurer, Dennis Johnson and loaned by Autobahn of Fort Worth.