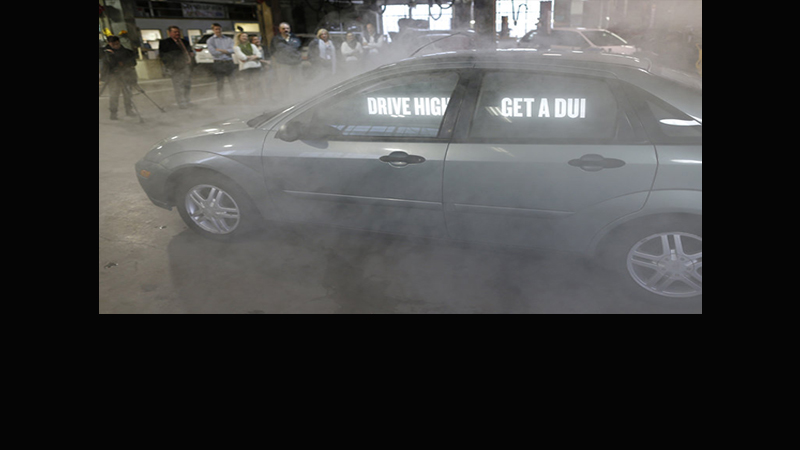 News from smaller cities across the United States

The group found that Colorado, Oregon and Washington all saw increases in damage reports compared to other states. That was true even after its researchers tried to take into account weather, types of vehicles, population density and other variables that might otherwise explain the increases.

“Every measurement that we took indicated that crash risk had increased,” says Matt Moore, a senior vice president at the institute, which is affiliated with the Insurance Institute for Highway Safety. 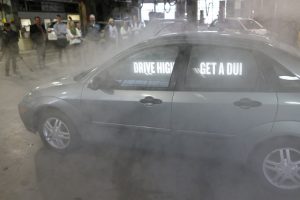 Car that the Colorado Department of Transportation took to 4/20 rallies and concerts to promote safe driving. (AP/David Zalubowski)

Researchers used state-to-state comparisons, rather than before-and-after analyses, so that the results aren’t skewed by factors that are unrelated to marijuana legalization. Year-to-year changes in the economy and weather patterns, for example, can affect the numbers of crashes. By comparing different states in the same time period, the researchers can focus on the differences among states.

But that doesn’t mean it’s an open-and-shut case. Other experts, looking at other data, have seen no significant effect in the number of crashes since the first three states legalized marijuana sales. Some research even suggests that crashes have declined.

The Colorado State Patrol, for example, actually saw a slight decrease in the number of crashes involving impaired drivers it responded to between 2015 and 2016, from 1,582 crashes to 1,508. That category covers drivers under the influence of any substance, including alcohol, marijuana and other drugs.

Meanwhile, a team of researchers from Texas published a peer-reviewed study in the American Journal of Public Health last week that showed only a small difference in Colorado or Washington’s crash rates, and they said it wasn’t significant. The effect of “0.2 fatalities per billion vehicle miles traveled, would equate to approximately 77 excess crash fatalities (of 2,890 total) over nearly 38 million person-years of exposure in the three years since legalization. We do not view that as a clinically significant effect, but others might disagree,” they explained.

All of that makes Mason Tvert, the communications director for the Marijuana Policy Project, skeptical of the insurance industry study. The insurance study, Tvert notes, doesn’t look at the causes for the increase in collisions they found. It only highlights the correlation between legal pot sales and increased insurance claims.

“They’re a well-respected organization, and it’s great they’re taking a look at this,” Tvert says. “But you need to take a holistic look at this issue. You can’t look at just one study. There are as many studies showing no reason to be concerned as there are studies that might make you concerned.”

The Marijuana Policy Project supports legalization of marijuana, but it also supports policies to crack down on people who drive while impaired by the drug. Even though it is legal to buy marijuana in Colorado, Oregon and Washington, it is still illegal to drive under the influence of the drug in those places.

One of the biggest problems police face in cracking down on driving under the influence of marijuana is that there is no uniformly accepted way of measuring marijuana impairment yet. Urine samples don’t reliably indicate how recently someone used pot, because chemical indicators of marijuana use can stay in someone’s system for days. Even blood samples, which are more reliable than urine tests, have limits. After smoking marijuana, for example, the THC blood levels will decrease much more rapidly in occasional users than it will for chronic users.