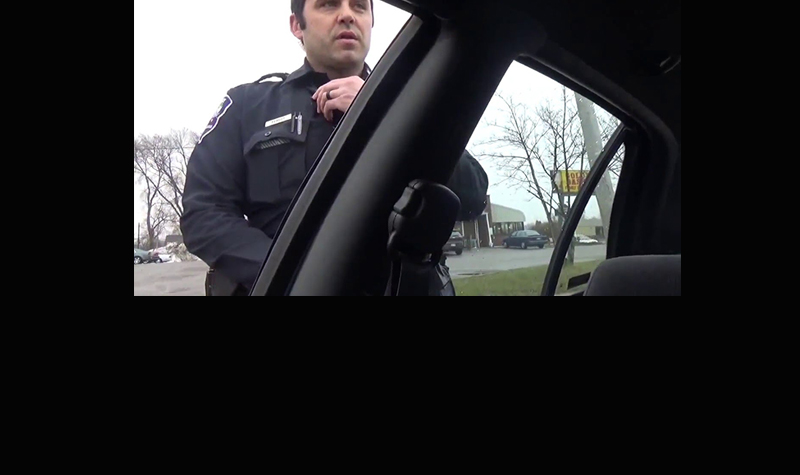 Drat!  I explained to the officer I was guilty, I was hurrying as it takes 15 ​minutes  somedays to get out of my neighborhood that is surrounded by construction on Glade and Hwy 26, and I ​ was on my way to pick  up 3 young children from XXXXXXXXXX Elementary. I asked for his mercy; i.e. a warning.

He said, let me check your license and registration and if it’s all okay, I’ll just issue a warning. He went to his vehicle.

I was curious that he said he would ‘issue’ a warning. He came back and handed me his little electronic device and asked me to sign my name. I asked what I was signing and he said a warning.

I said t​hank you for the warning, but I’ve never SIGNED a warning before.​ He said this is a documented warning, and the policy is to sign it. Please sign here. I said I never heard of that ‘policy’ and asked if I HAD to sign? He said, no he could mark REFUSED on it.

And then he kind of laughed and said, and we also take photos of drivers now, and held up the device to my face, similar to taking a photo with a cell phone. I said, What? And I held my hand up in front of my face. I said I’ve never heard of that before either. He said its the policy.

What the hell? Traffic laws are now interwoven with new ‘policies’?

LNO Requested a response from Assistant Colleyville Police Chief Robert Hinton, his response is below;

“Senate Bill 1849 commonly known as the Sandra Bland Act requires all police departments to document all traffic stops even if no citation is issued. This law change which went into effect September 1,2017 requires that all warnings also be captured for racial profiling statistics thus it is now policy that all warnings must be entered into the system and issued to the violator.  This tracking is now mandatory on all traffic stops. There are many other aspects of the new law that place additional burdens on police agencies.

Information on the Law is below; although there was no provision LNO could find directly stated in the Bill concerning “requires all warnings also be captured for racial profiling,” although there is certainly no question concerning the validity of Assistant Chief of Police Robert Hinton’s comment.

Below is a brief summary of the bill:

Texas Gov. Greg Abbott on Thursday signed into law a measure that seeks to address the circumstances that led to the death of Sandra Bland, a black woman found dead in a county jail days after being arrested during a routine traffic stop.

The Sandra Bland Act mandates county jails divert people with mental health and substance abuse issues toward treatment, makes it easier for defendants to receive a personal bond if they have a mental illness or intellectual disability, and requires that independent law enforcement agencies investigate jail deaths. The law takes effect Sept. 1.

The law’s namesake, a 28-year-old from Illinois, died in the Waller County Jail in 2015. Her arrest followed a lengthy argument between Bland and then-Department of Public Safety Trooper Brian Encinia, which was documented by the officer’s dashboard camera.

fter Bland’s death – which was ruled a suicide – her family, activists and lawmakers swiftly criticized the rural jail’s leadership and Encinia. With a new legislative session a long way away, the Texas Commission on Jail Standards was first to offer a solution, revising the intake screening process of county jail inmates to better identify mental health issues. During the legislative session, state Rep. Garnet Coleman of Houston introduced a bill named in honor of Bland. A comprehensive piece of legislation, the bill originally tackled racial profiling during traffic stops, consent searches and counseling for police officers who profiled drivers, in addition to jail reforms.

That bill didn’t move out of committee because of opposition from law enforcement groups and lawmakers concerned about unfunded mandates. The Senate version of the bill, by state Sen. John Whitmire of Houston, removed much of the language related to encounters with law enforcement (de-escalation training remained) and became a mostly mental health bill, which ultimately passed both chambers without opposition.

Bland’s family expressed disappointment in the Senate version of the bill, calling it a missed opportunity because it removed language relevant to Bland’s stop.

“The Sandra Bland Act will prevent traffic stops from escalating by ensuring that all law enforcement officers receive de-escalation training for all situations as part of their basic training and continuing education,” he said.