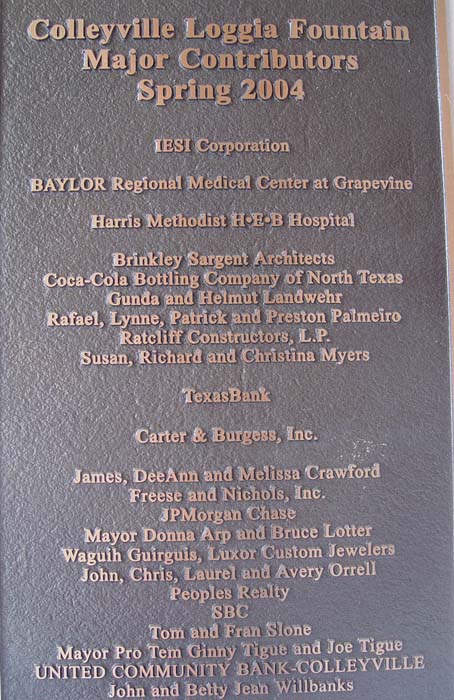 Funds owed to City ofColleyville for more than 4 years continue to go uncollected ( an LNO story on the 2004 “so called fountain” between city Hall and the library. While donor’s names remain of the commemorative plaque,  Colley Tax Payers actually picked up the bulk on the debt.)
by Nelson Thibodeaux & Linda Baker

Previous Mayor’s promises to pay for “fountain” remain unpaid
The most recent city budget earmarks thousands for “new art” in the city while the cost of old art remains on the back of taxpayers despite pledges to pay by well-known companies, a famous athlete and the developer that stands to benefit from millions of taxpayer dollars.

Along with a new property tax increase and a 6.6% raise for City Manager Bill Lindley of Colleyville, the city staff and council members funded a new “art program” for  two years adding $60,000 for projects in its 2007-08 budget.

‘The public appreciates art, it adds amenities to the landscaping,’ Lindley said when discussing the program with media.

However, the city committed $140,000 for an “art fountain” in 2002, without prior approval of city council, based on promises by ex-Mayor Donna Arp that local individuals and businesses would actually cover the cost.  Curiously, the opportunity to have one’s name or company’s name enshrined for eternity on a brass plaque next to the city’s new library, could be done on credit! Read the original article entitled;
Art for Arp’s Sake.

The “promised” donations included a staggering $30,000 from IESI, the company that was destined to win a bid ousting Trinity Waste for the city’s garbage collection and the same company this year the city council awarded a new contract without accepting other bids.  According to city records, IESI paid the 30 Grand, however, other entities and individuals have simply decided to ignore their original commitments.  Because of their failure to pay, Colleyville taxpayers made up the debts of Baylor Healthcare to the tune of $12,750. The “financed” donations have been ignored on the due dates of September 30, 2004, 2005 and 2006.  Harris Methodist owes the city $3,000 on its $15,000 pledge since September 30, 2006.

Despite the fact their names remain prominently on the plaque, multi-millionaire Colleyville resident and professional baseball player Rafael Palmeiro and wife Lynne did not pay their balance of $2, 000 due on September 30, 2003 and 2004.

Despite the fact that LNO reported the failure of these entities to cover pledges their pledges that have been made good by the taxpayers of the city, there is no evidence the City of Colleyville has made any attempts to collect on the funds.  The article;
on October 8, 2004 reported on the outstanding debts, Dried up Fountain and Dried up Pledges.One Village of Colleyville retailer is more than one year behind on payments pledged.

Of additional interest, was the current city council’s decision not to go out for bid again on the garbage contract and negotiated directly with IESI for the best price for the citizens.  This exact argument was debated when IESI obtained the controversial award of the city’s contract under the administration of Arp.  Arp insisted that the city was obligated to go out for bid and those who felt negotiations were the better route were accused of attempting to hide matters from the public.