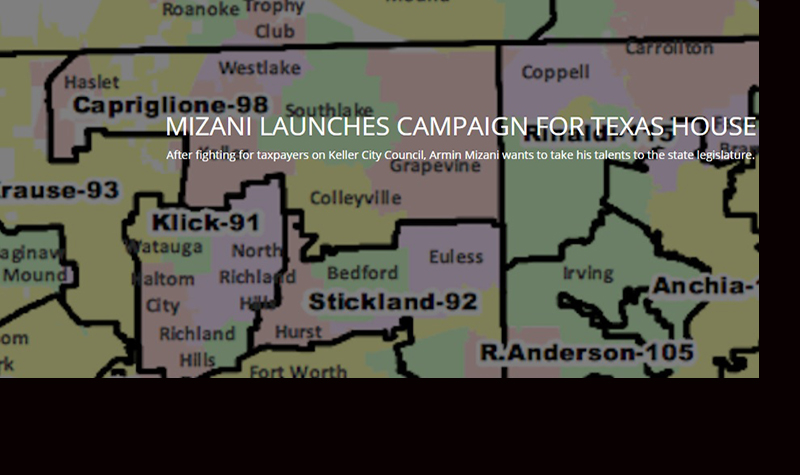 That’s why the North Texas Republican is stepping up to challenge an incumbent state lawmaker who’s had a declining record of representing conservative values.

Mizani announced Wednesday that he is running for Texas State Representative in House District 98 against incumbent Giovanni Capriglione of Southlake in the March 2018 primary.

The district encompasses northeast Tarrant County, including the city of Keller where Mizani serves as a city council member.

Mizani’s record during his three years on Keller City Council includes reducing the city’s property tax rate each year, introducing the first homestead exemption increase in over 30 years, and authoring Keller’s revised ethics policy. Mizani has also served as a Republican precinct chair and delegate to the Republican state convention.

“As State Representative, I will bring conservative leadership to the Texas House where we will double down on our efforts to address government spending and rising property taxes, curb illegal immigration, reform our broken school finance system, and protect the sanctity of life,” Mizani said in a statement announcing his candidacy.

Mizani says he was asked to run by local leaders in the district. Many are disappointed with their Republican incumbent’s declining conservative voting record over his three terms in office. Capriglione earned an F rating on Empower Texans’ 2017 Fiscal Responsibility Index; in 2013, he earned an A.

“In 2012, House District 98 unseated a seven-term incumbent because they were tired of conservative legislation being shut down by the Austin political class and special interests,” Mizani said. “Unfortunately, our current State Representative, someone who I and many others supported, has become part of the same political class he once campaigned against.”

Several Republican lawmakers who are failing to represent their conservative constituents have already drawn primary challengers, and those that haven’t should expect to.