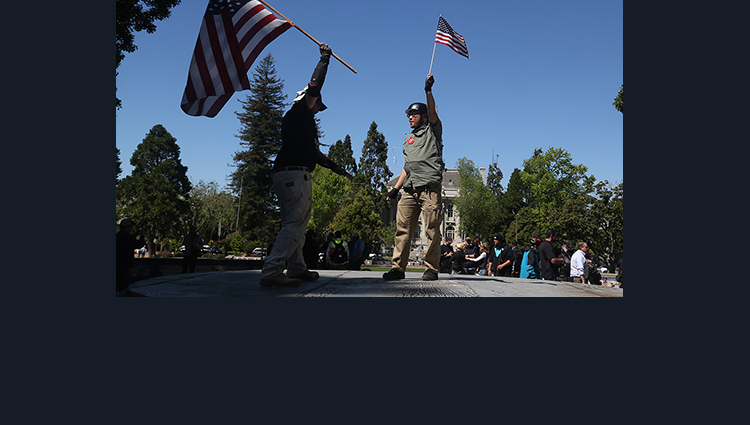 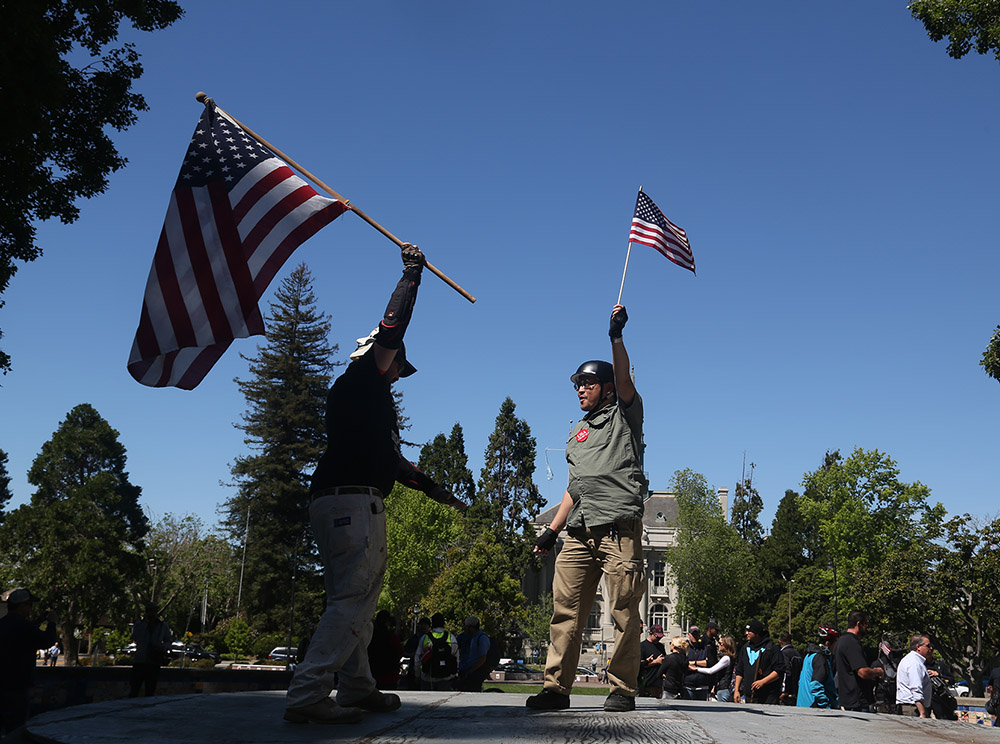 Two demonstrators wave American flags during a rally in Martin Luther King Jr. Civic Center Park in support of free speech and to denounce the cancellation of an appearance by conservative writer Ann Coulter, in Berkeley, on Thursday, April 27, 2017. Photo: David Yee ©2017

The federal government has weighed in on a UC Berkeley free speech case, expressing support for a conservative student group that sued the university last year.

In a “statement of interest” filed in federal court Thursday, the Department of Justice advised a judge to deny UC Berkeley’s motion to throw out a lawsuit from the Berkeley College Republicans (BCR) and Young America’s Foundation (YAF). The lawsuit, initially filed in April, alleged UC Berkeley violated conservative students’ First Amendment rights by thwarting their plans to host speakers on campus.

In a press release on the new statement, Associate Attorney General Rachel Brand wrote, “This Department of Justice will not stand by idly while public universities violate students’ constitutional rights.”

The lawsuit in question mainly targets how UC Berkeley handled the College Republicans’ attempts to bring conservative speakers Ann Coulter and David Horowitz to campus last spring. Campus administrators limited where and when the events could take place, citing safety concerns in light of the violence during anti-fascist protests that shut down Milo Yiannopoulos’ planned speech that semester. They also said the student organizers had not followed campus policy when setting up the events.

The students, along with Young America’s Foundation —a national organization with ties to prominent conservatives, which bankrolls BCR and other conservative college groups — said Cal was treating them and their speakers differently than they would liberal students and events.

The events at Berkeley have fueled a national debate on freedom of speech, hate speech and the constitutional and financial obligations of a public university. While headed by Attorney General Jeff Sessions, the Department of Justice has criticized several other universities along with Berkeley, declaring in a Fox News op-ed published Thursday as well that “free speech is under attack at college campuses across the country.”

Judge Maxine Chesney, in San Francisco, has already dismissed the initial version of the BCR and YAF lawsuit, in large part because BCR was able to successfully host conservative writer Ben Shapiro on campus in September, and because UC Berkeley crafted a new events policy in an attempt to clarify and standardize the speaker rules. But Chesney invited the plaintiffs to file a new complaint addressing those developments and going into more detail about the campus’s alleged suppression.

The College Republicans have filed an amended complaint, and the university responded with a second motion to dismiss. A hearing is set for Feb. 16. 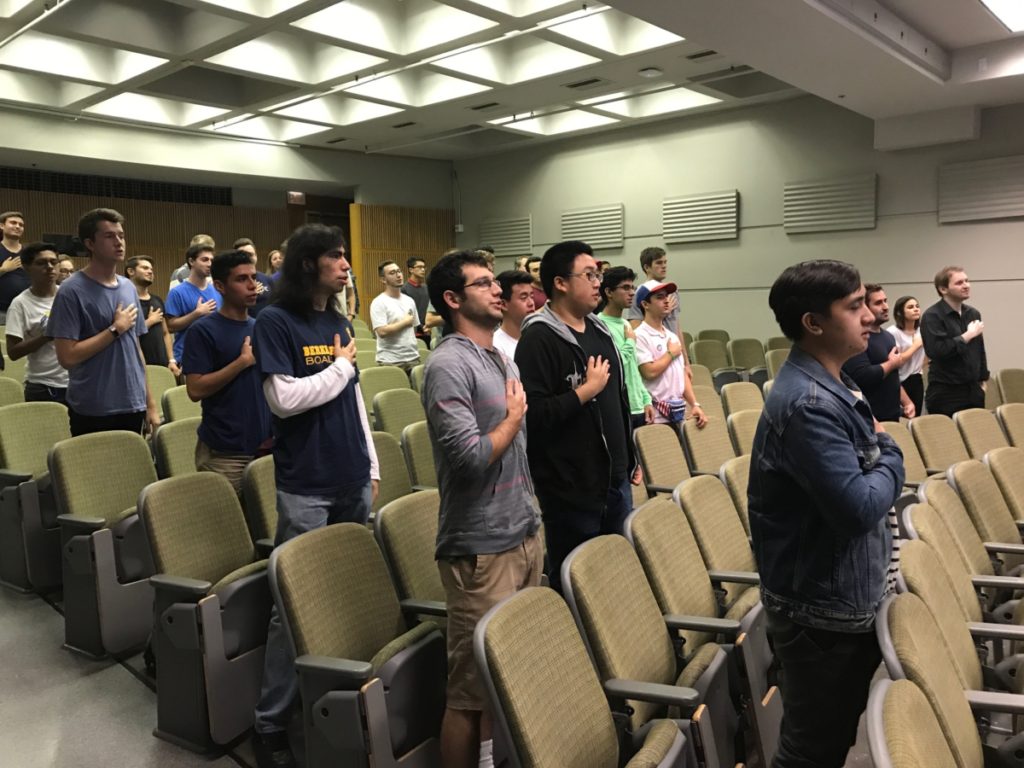 The lawyer for BCR and YAF, Harmeet Dhillon, said Thursday that she and her clients are “very happy” that the federal government has filed a statement of interest that “strongly support the plaintiffs’ claims.” The statement specifically addresses points that have been contentious in previous hearings, she said.

Asked about the statement Thursday, UC Berkeley spokesman Dan Mogulof said the administration maintains that the lawsuit is unfounded.

“Berkeley does not discriminate against speakers invited by student organizations based upon viewpoint,” he said in a statement emailed to Berkeleyside. “The campus is committed to ensuring that student groups may hold events with speakers of their choosing, and it has expended significant resources to allow events to go forward without compromising the safety or security of the campus. This suit has already been dismissed by the Court once. The campus will continue to vigorously defend itself against these allegations.”

UC Berkeley released its new “major events policy” earlier this month. The new and clarified rules apply to events with at least 300 expected guests and require student organizations to register the events at least six weeks in advance. Organizers are also required to cover “basic security costs,” as defined by UC police, which can reach several thousands of dollars. The university covers additional costs considered necessary around campus, as it did for the $600,000 Shapiro event.

The administration says the policy is “viewpoint neutral,” applying to all events regardless of political leaning.

Dhillon, however, said she believes there is essentially “no improvement” from the previous policy.


The Department of Justice said the university’s policies have allowed Cal “unbridled discretion to decide when, how and against whom to apply the policies.”

YAF also celebrated the statement of interest in a press release Thursday.

“This move signifies support from the highest levels of the US government for the critical work of Young America’s Foundation and the conservative students we help to boldly advance conservative principles across the country,” the organization wrote.

This is not the first time the feds have offered feedback on UC Berkeley’s actions regarding conservative speakers and antifa protesters.

Following the Yiannopoulos event in February 2017, President Donald Trump tweeted: “If U.C. Berkeley does not allow free speech and practices violence on innocent people with a different point of view – NO FEDERAL FUNDS?”