The First Indoor Stadium opened in 1965.  Still in High School, I ventured from Beaumont to Houston in 1965 on the opening day of the “Dome”, a double-header with the Astro’s, (Formerly the Colt 45’s) and the famous New York Yankees in an exhibition match! The incredible building had natural grass and open windows panes all over the top, you could literally look up and see the sky from inside!  What did I get to see?  Only Mickey Mantle hitting a Home Run off Astro’s Pitcher Turk Farrell.

Years later, during the regular season, I was back at the Astrodome to witness an incident that would spark the beginning of a new invention!  That day, Al Spangler was playing left field when a high pop fly was launched in his direction, normally a sure-handed outfielder, not only did Spangler NOT catch the fly ball, the ball actually hit the turn about 10 yards from where he was standing.  The clear panels on the roof of the Astrodome, were installed so light could reach the natural turf.  Unfortunately when a high fly ball was hit with the clear panels and steel structure up top as a background, the players couldn’t pick out the ball against the confusion back drop of the top of the Astrodome.  Viola! Hello Astro-Turf!

Several years after it’s opening, my best friend from High School had become the Security Director for the Astrodome.  As such he had access to everything, including the guts behind the Astrodome’s famous huge score board that would light up when the Astro’s hit a home run…with a Cowboy roping a steer…to the private quarters of the visionary owner, Judge Roy Hofheinz.. 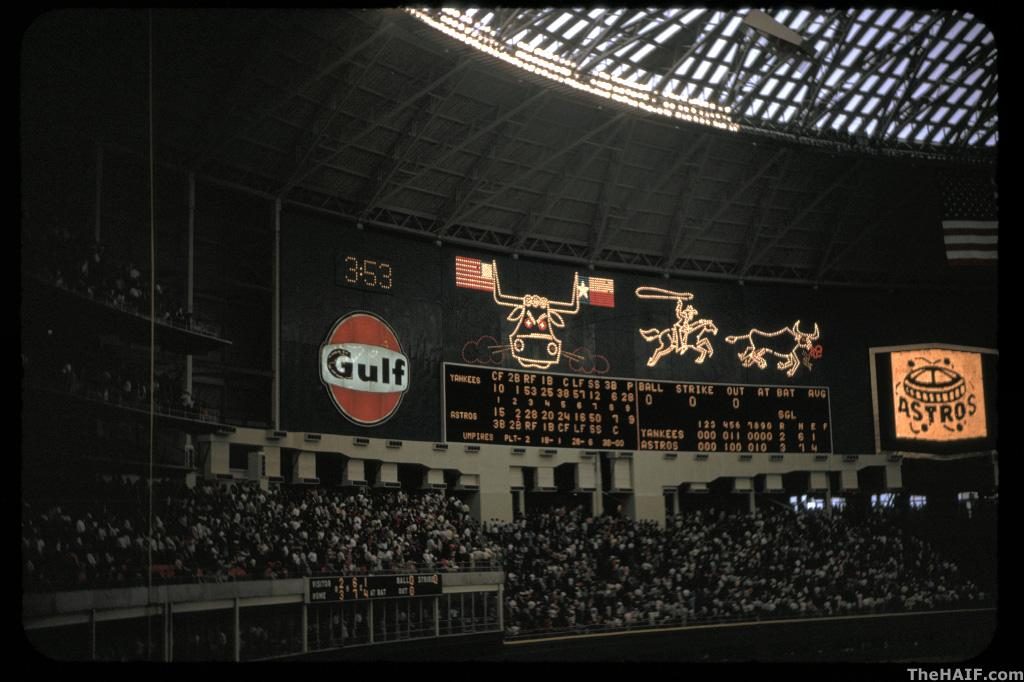 The “Judge” title came from the years that Roy Hofheinz served as the County Judge.  In these quarters was the famous Zebra Room with everything in a “zebra motif.” A shooting gallery, like at the state fair!, a one lane bowling alley, a private balcony off the quarters so the Judge and family could sit on this one of a kind view for all games and finally the Grand-Children area where everything was sized down from the toilet to small window openings so the kids could watch the game, while the adults has numerous locations to peek out at the game while in the Judge’s actual living quarters. 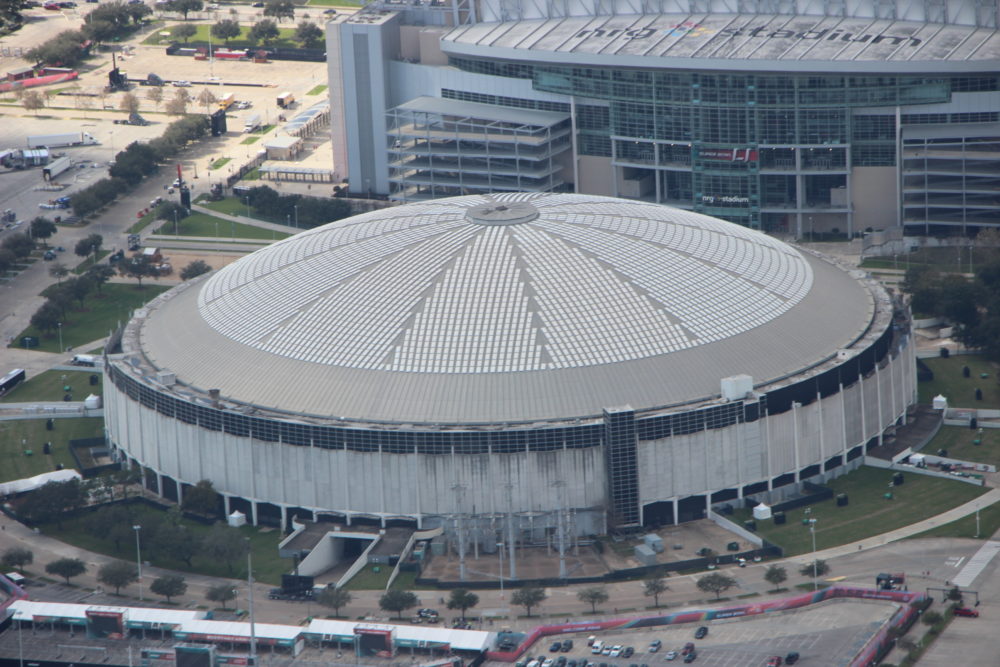 The following is from the Texas Historical Society that features a new book on the Astrodome, as it begins a new life with a $105 million renovation plan!
As well as offering a new book benefiting the Society on the Astrodome, now available. Copyright © 2018 Legacy of Texas, All rights reserved.

Houston made its mark on the sports and entertainment world with the construction of the “Eighth Wonder of the World,” the Astrodome. Although it currently sits empty, the Astrodome remains a modern architectural marvel and is now a State Antiquities Landmark. Keep reading below to learn more about the Astrodome’s unique story.

The Astrodome, the first fully air-conditioned, enclosed, domed, multipurpose sports stadium in the world, was officially named Harris County Domed Stadium when it opened in April 1965. On average, more than four million persons visited the Astrodome each year between 1965 and 2000. It has been used for major-league baseball, major-league soccer, professional and collegiate football, championship boxing, Portuguese-style bullfighting, rodeos, polo, collegiate basketball, special concerts, conventions, and religious meetings. The Astrodome is the prototype of numerous sports structures, including the Superdome in New Orleans, the Kingdome in Seattle, and the Silverdome in Pontiac, Michigan.

The first tangible efforts toward building the innovative stadium were made when the Harris County Park Commission was established by the Fifty-fifth Texas Legislature. The bill enabled Harris County to submit a revenue-bond issue to property owners for a Houston sports center. Voters approved the issue by a vote of more than three to one on July 26, 1958. Later, the idea of having an all-purpose covered stadium was developed through the leadership of Roy M. Hofheinz, and it was determined that a new bond issue should be held to authorize general-obligation bonds. On January 31, 1961, the voters of Harris County approved a general obligation bond issue of $22 million.

Ground was broken on January 3, 1962. After excavation work was completed it was found that more money was needed to complete the structure. On December 22, 1962, another bond issue of $9 million was approved by Harris County property owners. Although there were two lawsuits and other delays, construction on the stadium itself started on March 18, 1963, and was completed two years later. The stadium structure itself cost $20 million but the overall cost was more than $40 million of which $31.6 million came from two county bond issues and $3.75 million from the state highway department and the city of Houston for off-site improvements, including paved streets, bridges, and storm sewers. The Houston Sports Association, which leased the stadium from the county for forty years, added $6 million for apartments, restaurants, cushioned seats, and a $2 million scoreboard.

The first event in the Astrodome was held on April 9, 1965, when the Houston Astros played the New York Yankees in exhibition baseball. The first football game was played in the Astrodome on September 11, 1965, when Tulsa University defeated the University of Houston by a score of 14–0. Professional football established itself in the Astrodome when the Houston Oilers began playing all of their home games there after a preseason exhibition game with the Washington Redskins on August 1, 1968. Seating capacity of the Astrodome for baseball was 52,000, for football about 62,000, and for some events, 66,000. Temperature was a constant 73°F, with humidity at 50 percent. There were five restaurants. Hofheinz ordered the plastic roof painted because outfielders had trouble tracking fly balls during daylight in the bright glare and criss-cross network of girders overhead. The lack of sunlight killed the grass, but the Chemstrand Company, then experimenting with an outdoor artificial carpet, produced what came to be called AstroTurf. Hofheinz, starting in 1966, used this instead of natural grass. Over time, questions were raised about injuries suffered from the harder surface, although numerous other stadiums elected to use it.

In 1988 and 1989 the dome underwent a $100 million renovation. Seating was expanded by 10,000, seventy-two luxury boxes were built, and four cylindrical pedestrian ramps were added to the exterior of the structure. As well as being the one-time home for both the Houston Astros and Houston Oilers, the stadium has also hosted the United States Football League Houston Gamblers, World Football League Houston Texans, and the University of Houston Cougars. Annual events included the Astro-Bluebonnet Bowl and the Houston Livestock Show and Rodeo.

Other notable events include the 1966 heavyweight title fight between Muhammad Ali and Cleveland Williams, the 1968 “Game of the Century” between the UCLA Bruins and the University of Houston Cougars, and the 1973 “Battle of the Sexes” tennis match between Billie Jean King and Bobby Riggs. The stadium also hosted the MLB All-Star Game in 1968 and 1986, the 1971 NCAA Final Four, and the 1989 NBA All-Star Game. In 1992 the Republican party held its national convention at the dome.

Since the late 1990s the Astrodome has experienced a marked decline in use as long-time tenants have relocated to newer venues. The Astrodome’s final permanent tenant was the Houston Energy of the Women’s Professional Football League, who last played there in 2006. In September 2005 the Astrodome served as a temporary emergency shelter for thousands of displaced New Orleans residents after Hurricane Katrina.

In 2009 the Astrodome was permanently closed to the public after the Houston Fire Marshal’s Office cited numerous code violations. Since then, proposals to demolish the stadium have competed with a variety of plans to renovate and redevelop the structure into either a luxury hotel, convention space, movie production studio, mall, aquarium, or indoor park. The most ambitious proposal, a $217 million bond measure to convert the dome into a multi-purpose event facility, was rejected by popular referendum in November 2013. To protect against renewed calls for demolition, local preservation groups successfully lobbied to have the Astrodome added to the National Register of Historic Places in January 2014. On January 27, 2017, the Texas Historical Commission designated the Astrodome a State Antiquities Landmark, thus making any future alterations to the structure subject to approval from the state government.

In September 2016, the Harris County Commissioners Court voted unanimously to approve the design and engineering for a $105 million revitalization plan. The first phase of the project will convert underground portions of the stadium into a multi-level parking structure with space for 1,400 vehicles, leaving nine acres of above-ground, indoor floor space available for commercial redevelopment. The plan received final approval in February 2018, and construction is expected to begin in October 2018. The plan ensures this pioneering Texas structure will stand for many more years to come. 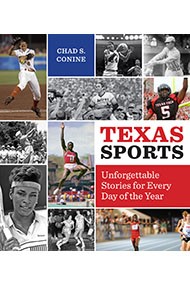 Texas Sports: Unforgettable Stories for Every Day of the Year