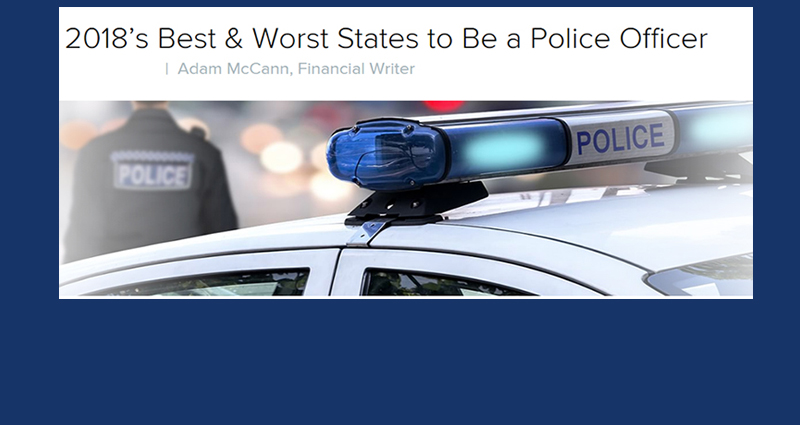 Best States to be a Cop

Law enforcement is a career that is always in the public eye, whether it’s for heroic reasons or scandal. It’s a profession that more than 900,000 Americans hold, knowing full well the hazards associated with their occupation. In the past 10 years, for instance, more than 1,500 police officers, including 129 in 2017 alone, died in the line of duty. Tens of thousands more were assaulted and injured.

Because of such risks, law-enforcement agencies must offer enough incentives to attract and retain officers. So what qualities define a good place to live and work for police? To start, there’s a $62,960 mean annual wage that exceeds the $50,620 for all occupations. On top of that, there’s typically a generous benefits package can include retirement-contribution matches, tuition assistance, ample leave time, a take-home vehicle, and access to health and fitness facilities. Officers also may begin drawing full retirement benefits as early as age 40, depending on when they entered the force.

Beyond financial perks, officers are more likely to be attracted to police departments that steer clear of scandal and corruption and that are transparent with their communities. Public opinion on police remains divided, with younger people and minorities rating them much less positively than older caucasians. Naturally, police departments that have better relations with the areas they patrol are more attractive to new officers.

In order, therefore, to determine the best states in which to pursue a law-enforcement career, WalletHub compared the 50 states and the District of Columbia across 25 key indicators of police-friendliness. Our data set ranges from median income for law-enforcement officers to police deaths per 1,000 officers to state and local police-protection expenses per capita. Read on for our findings, commentary from a panel of researchers and full description of our methodology.