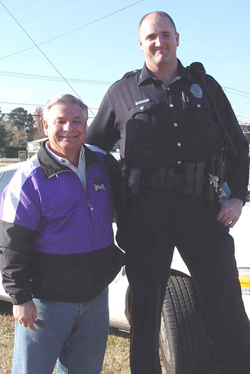 LNO Historical Articles May 2018 – The Smug Merchants were the primary reason Colleyville was perceived as being a refuge for effete snobs.

Being a Colleyville policeman has become too sweet a “gig”
Such were the conclusions in a Letter to the Editor published in that bastion of local journalism “The Courier.” An LNO reader referred me to the May 16th copy because of the whining of a “Quintessential Colleyville Smug Merchant” about the Colleyville Police.

The “Colleyville Smug Merchants” were that group of big income, big house, big ego, small minds who railed against any business that might have the audacity to desire setting up in Colleyville. They perpetuated hysterical demagoguery in the name of keeping Colleyville “rural”. Remember the Hall Johnson Road controversy?

While marching under the “rural” flag and telling each other how special they were; their elected representatives approved high density residential developments at a staggering rate, (for their “special friend developers” ), right under their noses.Truthful facts were lynched by a mob mentality hell-bent to crush anyone that might have a slightly different view of hometown Colleyville.

They were the ones that could never connect the dots that without sales taxes from expanding businesses their property taxes would increase to meet the demand to provide services for a growing population living in zero lot line homes.

They were the ones that fell silent when Donna Arp, one of the co-founders of The Courier and ex-Mayor, set a new barrier for unethical performance when six months after she left the mayor’s office her new job was as President of her favorite developer. You recall right?  She was most responsible for directing $7.5 million in taxpayer’s money to the failure that is the Village of Colleyville then becoming President of the same developer’s company.The Smug Merchants were the primary reason Colleyville was perceived as being a refuge for effete snobs.While Southlake’s Town Center blossomed into an incredible success with a real hotel; the Village of Colleyville stagnated into glorified apartments still awaiting the Donna Arp, “Mirage Hotel.”

I thought the Colleyville Smug Merchants may have accepted self-banishment since the embarrassment of their collapsed political empire morphed into the arms of the developer responsible for bringing to Colleyville the most dreaded word in the Smug Merchant’s dictionary…”apartments.”

But alas, we have a Smug Merchant attacking the Colleyville Police Department because, in his words, “Lexus-driving housewives” are being ticketed for rolling through stop signs by police that “continually demonstrate a lack of discretion and lamentable disregard for both good law enforcement practice and Colleyville taxpayers.”

Translation – the cops in Colleyville have the audacity to ticket some rich housewife for breaking the law, who’s apparent biggest concern is that she is late for her pedicure.

The Smug Merchant goes on to credit Chief Tommy Ingram with his own assumptive response that, “Chief Ingram would argue that despite their ‘generally’ physical shortcomings, his officers’ very presence prevents crime.”

If this clown thinks the Colleyville police have “physical shortcomings” I would like to introduce him to 6′ 7″ Colleyville Police Officer B. J. Thorne!

Pictured with the LNO Editor; if one has a “physical shortcoming” it certainly is not the Colleyville Police Officer!

The Smug Merchant then writes his own conclusions to the fabricated words of Chief Ingram… “This of course is self-justifying nonsense; since the Police Blotter this week listed four minor crimes, none against the person.”  He then goes on to spew the typical ignorance of why aren’t they out capturing criminals (of course according to him there are none in Colleyville) versus giving out tickets to  mistreated, well-healed, bored little housewives.Smug Merchant throws in that the city’s 2007 annual report points out that “fines and forfeitures were up due to an increase in citations….and…warrant collections.”  He apparently is unaware that due to the appointment and hard work of Officer Raymon Cannon the warrants division has more than paid for itself by collecting from deadbeats and the apprehension of those with outstanding arrest warrants.

Now if you have followed The Courier unique style of reporting. There is a history here of writing news articles in a slanted way to best fit the Executive Editor and his lapdog part-time reporter/real estate agent’s personal bias. Therefore one is not to be surprised that “this week’s listed four minor crimes, none against person” reference is actually printed on the top of the same page.  Since this IS NOT
the instant response of the Internet; just how did the Letter to the Editor Smug Merchant author know there were only 4 incidents reported in the same newspaper issue that contains his letter?

The very next Letter to the Editor encourages readers to boycott the restaurants along Hwy 121 (in Colleyville) because of the ongoing crime problem of car burglaries.

In fact if Smug Merchant expanded his factual input stream and read LNO; he would find that during the same week there was a burglary of thousands of dollars from a $1.3 million new home, the stolen purse caper at the Subway Shop, the smash and grab at the Costa Vida restaurant, the burglary of a vehicle at Sparger Park and yes; even some potential famous Smug Merchants getting traffic citations.  Not to mention the 11 arrests that were made. And this was a quiet week.

This is not to say that there is a Colleyville crime wave, just that there is more going on under the surface than the Smug Merchant, apparently unaware because of his overwhelming concern for desperate housewives, seems to know or care about.

Point is that the overwhelming majority of citizens of Colleyville support our police and understand the real dangers they can and do face everyday.  If you are one of the victims of crime it is of little interest that only 3 others were also victims that week.

Chief Tommy Ingram is the most community oriented Police Chief in the history of the City of Colleyville.  You will find him at virtually every public function where is is approachable and interested in any citizen input.

Unlike some nearby cities, there have been no outbreaks of questionable conduct or internal strife spilling out into the public from the police departments and city management.

I would recommend that our Smug Merchant move to a city with a higher crime rate where he feels the police budget can be better justified.

Fact is, and I ain’t telling; if the public knew how strapped our police were in the past and how few officers were patrolling their city, they would be shocked.  In fact, I believe our police and fire department have some of the most dedicated and committed public servants anywhere and they have already proven they do more with less.

Check out LNO each week for alcohol and drug related arrests and give thanks that the drunks were taken off the road before they killed someone and the drug problem was caught before it impacted your family.

The week we truly only have 4 incidents in the city will be a great tribute to the leadership of Chief Ingram, the amazing work of his force and worth every penny of city budget.

Regardless, the silent majority not of the Smug Merchant mentality, are regular folks that appreciate their police and I hope that you will respond in their support.