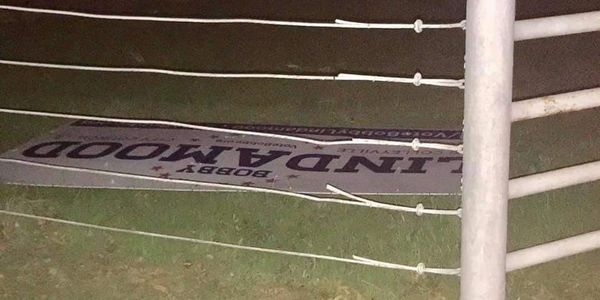 GCISD President for 14 years, apologizes that her husband deliberately tore down a Lindamood for council sign

Although the only thing the GCISD School Board and the Colleyville City Council elections have in common is that they are held the same day.  However, while there is no particular overlap of governing between the two, the activist supporting the 14 year reign of Lisa Pardo, President of the GCISD Board and lock step, Vice-President Louis Sullins, is that there are elections in May.

However, as has been noted in the last city council elections; there is an overlap in the crowd to keep incumbents on the GCISD and, in turn, change the make up of the Colleyville City Council. (Although the city council has virtually nothing to do with the School Board’s actions).

However, the significantly more liberal and fun loving, “never met a debt piled on the tax base,”  crowd, behind the scenes is also working to undermine the Incumbents on Colleyville City Council, while professing the “high ground,” for example the following statement by School Board President Lisa Bardo;

However, LNO has learned that, while running on entirely different platforms on the School Board than City Council Elections, the bias of one candidate’s household showed an ugly twist.  Although Lindamood and Pardo are running for and entirely separate campaigns, it has now been learned that Lisa Pardo’s husband, tore down a Lindamood campaign sign at Hall Johnson and the Pool Road Intersection.

However, apparently after an online discussion began amongst Lindamood’s supporters, about actually  going to the church to view the video cameras; came a surprise telephone contact from Lisa Pardo, apparently suddenly concerned about the potential of that the tearing down of Lindamood’s sign was caught on camers.

GCISD President, and 14 year member of the board confessed that is was actually her husband that took down the sign, because, ” he really didn’t understand this was a criminal act or at minimum very distasteful conduct.”

Apparently, the fact is the Compass Church was likely to have a security camera on the side of the building facing this intersection.  In fact, the security camera has now been turned to face the Intersection, where the sign was illegally torn down.

With the word spreading as fast as a California brush fire, a peaceful protest of citizens showed up at the Tuesday evening GCISD Board meeting to demand that Pardo step down, especially in view of her statement that Board Members, “should be role models for students.”  According to insiders understanding, Pardo apologized and said her husband didn’t understand the rules of fair campaigning, (this after 17 years as a politician on the School Board.)

At the Tuesday Board meeting, Pardo was met with a crowd demanding her to step down now from the School Board; 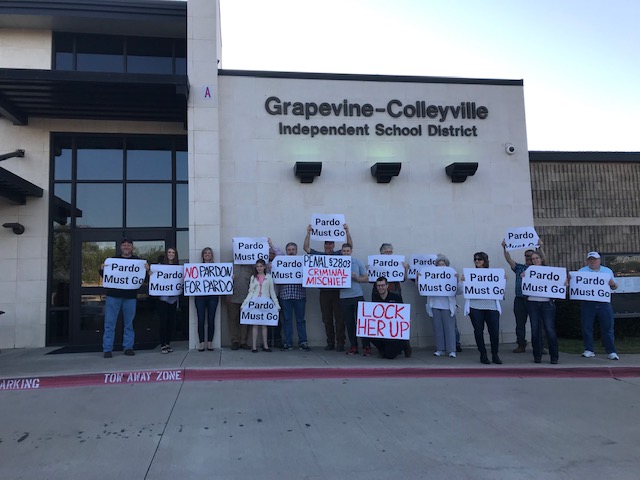 However, there appears little evidence that Pardo will step down.