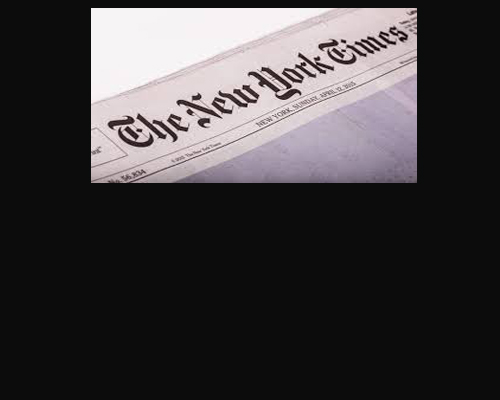 OPED by the, oh so liberal Columbia Journalist Review, points out obvious overreach by the Times and the Nation’s failing local press

Columbia Journalist Review  March 14, 2019
Editorial by LNO Editor Nelson Thibodeaux
LNO receives this publication weekly in the incoming email.  The editor has even corresponded with the CJR concerning their far left opinions about anything that might smack of the truth, especially that repeated from the New York Times.

However, an article of “Why Left can’t Stand the New York Times immediately caught my attention.

The following is a snippet of the  “Why the Left Can’t Stand the New York Times” by the Columbia Journalist Review
LNO Editorial Comment- the paragraph concerning NYT’s coverage of President Trump is explained as…”scrutinizing Trump ad nauseam because it pays the bills, not because it is good or even honest news coverage.

“The Gray Lady is suddenly the object of constant scorn from the nation’s highest office. Having spent eight years in the comfortable favor of Barack Obama, a position so secure that they faced zero consequences for such glaring moral and journalistic failings as the endorsement of the Iraq War, the “Failing New York Times” and its fellows now thrash in fury at their sudden irrelevance to these crude new political elites. The Times is unable to conceive of a world in which it was so very wrong, and unable to cope with a political administration that speaks of it with utter contempt. Not only has it lost the king’s ear, it is finding itself entirely incapable of appealing to the peasants; the cynical and transparent hit pieces on Bernie Sanders betray the paper’s general contempt for mass politics.

Were the American media machine accountable to the public, a more self-reflective, penitent assembly of institutions, or at least capable of shame, the Times might have spent a little effort reconsidering its “house style” ideology. And yet it stays the course. But why?

There are psychological factors at play: denial, certainly, which we see in the constant reassurance of the Times’s #resistance readership that this was all a big mistake and that Daddy is coming to save them any day now. But as a good Marxist, I must point out that ideology and its attendant publishing philosophies are largely the product of market forces. Public broadcasting institutions like the BBC can remain dull and informative. FT’s reportage serves a readership that gambles on world events. The New York Times compulsively analyzes and scrutinizes everything Trump ad nauseam because it pays the bills by cultivating an audience, flattering them, and keeping them stimulated. Just look at the “Trump Bump,” the 66 percent increase in profits the paper enjoyed from exhausting every possible iteration of commentary, speculation, or tirade about The Donald.

Looking further back, the decline of newspaper publishing as an industry has left much of “flyover country” nearly totally ignored by the coastal elites (yes, it’s a fair descriptor) for years now. Smaller papers have far smaller budgets for travel and long-term investigative reporting, and many local papers have been gutted or scrapped for parts entirely. Local coverage has its own weaknesses, of course, and national news is essential to avoid the parochial politics of a highly provincial federalist United States, but if we still had good local papers, might the Times have seen more of the misery and disaffection that paved the way for Donald Trump? Might serious local coverage of the immiserating results of NAFTA and welfare reform—both enacted by Bill Clinton—have made it obvious that Hillary would be less than inspiring for the majority of working-class Americans? “