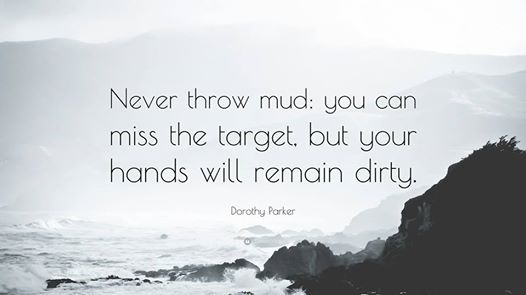 Editorial by and on behalf of Colleyville Mayor Richard Newton

There’s an old saying about throwing mud we’ve all heard. Earlier this week former councilperson Nancy Coplen falsely accused the incumbents currently running for re-election of “not adhering to the rule of law” many times during her time on council with them. I’m not sure exactly what she meant, and she has failed to respond to my emails and phone calls asking her to provide specific instances of this.

Since she threw in the Constitution in her remarks, I’d like to remind her that in the United States the rule of law means, and the Bill of Rights prescribes, that anyone is innocent until proven guilty. Her original email to undisclosed recipients and my email to her requesting examples of the “many” alleged violations appear below.

While I’ve been waiting for Nancy to respond I’ve learned that Elizabeth Illig Meadows took up Nancy’s cause on the Facebook page “Colleyville Citizens for Accountability”. I don’t know if Meadows is officially representing Coplen, but since I’ve had no response from Coplen, I’ll address the Meadows post, which begins with “Nancy Coplen was accused today by council woman Tammy Nakamura and mayor Newton of making “false and slanderous accusations””.

You can see from my email printed below that I did no such thing. Meadows then seems to say (it’s a little hard to follow) that Coplen’s accusation was a true statement, based on her personally watching three years of council meetings, and that Coplen had somehow suddenly become a “victim”.

The council meeting referenced in Meadows’ post and the link provided are from the June 21, 2016 meeting when the council passed Resolution 16-4005 to solicit proposals for a city attorney. During that meeting Coplen questioned why the subject was not discussed in the pre-council session. That apparently is what Meadows is using to say that procedures were violated.

I would not expect Meadows to know, but would certainly expect Coplen to, that there is no requirement that anything be discussed in pre-council sessions. There is a history behind these “pre-council” sessions that I will address in a future post. In my opinion they were used to provide the council a mechanism to discuss agenda items out of the view of the public. The appropriate place for discussion is during the regular council meeting when there is a public council discussion, a formal public hearing and then a council vote, and that is exactly what happened June 21, 2016. Meadows’ post and a link to the video of the meeting are given below. I encourage everyone to watch Agenda Item 6a in that video. https://colleyvilletx.swagit.com/play/06212016-904

A few additional facts that Meadows may not be aware of, but again, Coplen certainly should:

1) The mayor has the right to place items on the agenda as do council members in combination.

2) There is no requirement that items on the agenda be discussed during pre-council meetings (in fact I think they should not and I will address in another post).

3) I had personally discussed the fact that I planned to place this item on the agenda with each council member (Mike Taylor, Jody Short, Nancy Coplen, Chris Putnam, Tammy Nakamura and Bobby Lindamood) prior to the formal agenda being released for the council meeting.

5) If Coplen wanted to discuss this item during the pre-council session there was nothing stopping her from requesting a discussion in that meeting (she did not).

This is a case of political motivations getting in the way of proper and civil behavior. And by allowing that to happen the mud that was thrown wound up on the accuser.