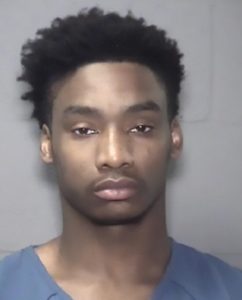 On 02-02-2020 at around 1:45 p.m., Hurst officers responded to the North East Mall where there was a
reported shooting in the second level of one of the parking structures. The suspect was located and taken
into custody. One victim is believed to have been shot multiple times and was transported to a hospital.
Another bystander was possibly struck with shrapnel from a bullet and received treatment by medics. This
investigation is ongoing and more information will be released, as appropriate, when available. We
presently believe the suspect was approaching people on foot to rob them of their belongings.
This appears to be an isolated event and we believe there is no further threat to the public.

On 02/02/2020, Tacorian Keith Howard, a 21-year-old male (mugshot below), shot a 35-yearold male victim on the 2nd level of the Dillard’s parking garage at the North East Mall. Howard,
who is in custody, has been charged with Aggravated Assault with a Deadly Weapon, Unlawful
Carrying of a Weapon, and Euless P.D. warrants. The shooting victim is expected to make a full
recovery and is currently in the hospital. Another person standing near the shooter, a 35-year old male, had a minor injury to his arm, possibly from a small piece of bullet shrapnel