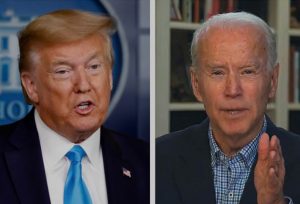 2020 Presidential Betting Odds on the Move!

Editorial by Max Anders in collaboration with LocalNewsOnly.com

Incumbent President Donald Trump is seeking a second term in office while presumptive Democrat nominee Joe Biden hopes to ascend to power in his stead. As it currently stands in political betting markets, it’s anybody’s guess which White House hopeful will win.

It’s fair to say, after getting the 2016 elections spectacularly wrong, oddsmakers are eager to avoid repeating the same mistake. Moreover, there’s an argument to be had that incumbency largely underscores Trump’s lead over Biden with a number of political betting outlets, where the president is favorably cast to clinch the 2020 US Elections.

Historically, incumbency yields approximately a 90% winning probability, as evidenced by four of the last five presidents in succession (Ronald Reagan, Bill Clinton, George W. Bush, and Barack Obama) all serving two terms in office before the arrival of ‘The Donald’. In fact, going back to FDR, eight presidents won back-to-back terms with just two failing to do so (Carter and Bush Sr.).

If numbers were indicative, statistically incumbency would suggest the ‘America first’ president might have a quantifiable edge. And yet, a discerning lack of unity prevails over political betting markets right now.

Several top-notch bookmakers have the former vice president Joe Biden nestled ever so delicately on even odds, as the slight underdog just nipping at Trump’s heels. Other bookmakers have boldly gone so far to flip the script entirely, installing the 77-year-old Biden as the favorite to become the 46th president of the United States come November.

How much stock should one put in the odds is debatable. Like any other market, political betting markets react in real-time to the current status quo, meaning political odds are constantly on the move in an election cycle. They’re volatile and susceptible to various influencers, from betting trends to the impact of opinion polls; from pandemic-induced depression to civil unrest; or from any other significant event to strike a candidate, state or nation.

Inasmuch as odds may be unreliable so too are opinion polls. According to a new Washington Post-ABC News poll that was conducted between May 25 to 28, via phone among a random national sample of 1,001 adults, Biden emerged with a 10 percentage-point edge (53% to 43%.) lead over Trump. One in a steady line-up of polls taken since March that points to a negligible lead for the Democratic hopeful with a rather minute cross-section.

This kind of horse-racing polling isn’t unusual at this time. Actually, it’s de rigueur in an election year, shaping media opinion and public perceptions. Consider a completely contrarian outcome from an Ipsos/Reuter poll in May, which showed Trump enjoying a statistical tie with Biden on the key question of which candidate would be better at leading America’s coronavirus response. On another question, of who was “better suited to create jobs” voters picked Trump by a margin of 45 to 32 percent.

Opinion polls like political odds aren’t predictive. They simply provide a context for the presidential contest and one that isn’t always accurate. Case-and-point, exit polls in 2016 pointed to Hillary Clinton as the favorite to clinch the keys to the White House, only for Donald Trump to put paid to that notion by winning the electoral college vote.

This isn’t the first time Biden gains a perceived edge over Trump in opinion polls or in the betting. After Biden’s Super Tuesday surge, which saw the 77-year-old geriatric catch a wave of national momentum at the time and ride it all the way to supplanting Bernie Sanders with a large delegate lead, Biden’s odds steadily improved against Trump’s odds. It was a moment in time when Biden enjoyed his highest satisfaction numbers, prompting oddsmakers to lift Biden’s estimation in proportion.

However, it was a brief sojourn in favoritism, proving that the relationship between public mood and political odds goes both ways. Indeed, in the immediate aftermath of the coronavirus outbreak, the ‘America first’ president received a boost in opinion polls.

Later, as the Trump administration began to look towards reopening America in May, revamping its “Make America Great Again” campaign slogan to “Transitioning America back to Greatness,” Trump’s approval rating was not far off from where it’s always been for the better part of his term in office. He remained a betting favorite as such.

All in all, whichever way the odds are cut the so-called advantage or disadvantage exhibited on the odds board, either way, is flimsy at best. It’s fairer to say, it remains a closely-cast race. And as the nation battles a pandemic, high unemployment and civil unrest associated with protests against police brutality and racial inequality, the political odds are bound to continue swinging like a pendulum between the pair.

However, it was a brief sojourn in favoritism, proving that the relationship between public mood and political odds goes both ways. Indeed, in the immediate aftermath of the coronavirus outbreak, the ‘America first’ president received a boost in opinion polls. Consequently, Trump re-emerged as the favorite to win the general elections.