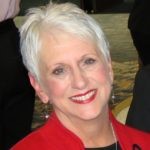 an Editorial by:
Fran Rhodes

Fran Rhodes is a resident of Fort Worth and Keller ISD and has been actively involved in local community affairs since 2010. Fran is president of True Texas Project.

As a leader in a conservative grassroots organization, people often contact me for advice or direction on an issue or concern. It’s one of the rewarding aspects of volunteer activism.
Recently, a woman contacted me about the suffering she has observed in nursing homes and long-term care facilities as a result of the Chinese coronavirus lockdown policies. She was looking for guidance about who to contact and what could be done to try to turn things around. I advised her to contact the governor (which she had already done numerous times) and state legislators.

However, since it seems the governor is not interested in hearing about it, I also told her to bring the stories out into the public view if she could find a way to do that—let the world know just how bad it is and how our government is holding these people hostage.

As a result of Texas Gov. Greg Abbott’s executive orders regarding the COVID-19 virus, residents of nursing homes and long-term care facilities have been virtual prisoners (sometimes confined to their rooms) since mid-March, with no contact with family or anyone outside the facility staff. Even in his most recent Phase III Opening Executive Order issued June 3, Abbott insists that long-term care facilities must still be locked down: 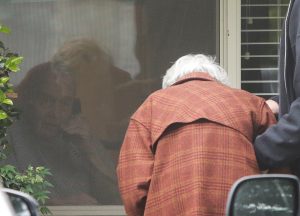 Charlie Campbell a retired RN from Silver City, New Mexico, takes his mom Dorothy Campbell, 88, of Bothell to see her husband Gene Campbell, 89, through his room window on March 5, 2020 at the Life Care Center nursing home in Kirkland, Washington where multiple cases of COVID-19 have been linked and some patients have died. – The US reported its first case of the disease in January and its first death on February 29 — both in the state of Washington in the country’s Pacific Northwest. Since then the toll has risen to 11 and the virus has spread to at least 14 states, infecting more than 180 people, according to an AFP tally. On Thursday, Washington state officials announced a jump in cases, from 39 to 70. Ten of the 11 deaths have been reported there, with the other in California. (Photo by Jason Redmond / AFP) (Photo by JASON REDMOND/AFP via Getty Images)

For those of us not dealing with the situation, it’s easy to just say, “Oh that’s so sad,” and then go off and complain about missing workouts at the gym, or worrying about what stores are requiring you wear a mask, or lament the fact that professional sports seasons might not happen. Until you hear the stories of what it’s like, you really don’t appreciate the severity of what’s happening.

But after talking to this woman who came to me for help, I decided to take up the cause.

To get started, I posted on Facebook, asking people to send me the stories of their loved ones and friends who are in these facilities—and send them, they did! The stories started pouring in from all over the state.

As I read them, my heart just ached for these people. Many have dementia and don’t understand or remember why their families have disappeared; some feel like they’ve done something wrong to be suddenly abandoned, or that their family just doesn’t care about them anymore. Others are well aware of what’s going on and are helpless to do anything about it.
For most of them, the situation is creating severe depression and worsening whatever conditions they already have. People with mental health issues depend heavily on routines, predictability, and the support of people they know and love. People who need medical care for other reasons thrive and recover faster with positive support from family and friends.
All of that has been lost for them in this COVID-19 nightmare.

Facility staff members do what they can to mitigate the effects of the restrictions, and I’ve learned from the stories that most of the staff are kind, caring people who go out of their way to help.

But staff can never replace a loving family in any way. Staff resources are limited, they are all over-worked, and only families can provide that extra layer of watchfulness and caring that protect these vulnerable patients.

One story I received came from a woman whose husband of 46 years is in a facility because of a brain injury.  “My husband cries all day from loneliness,” she said. “He says he would rather die than stay there.”

She has thought about bringing him home but does not have the resources there to care for him and would lose the Medicaid that covers his care if he returned home.
Another woman says, “The COVID protocol kills!!! I just lost my husband of almost 50 years. Many lose all hope and just stop eating and drinking. My husband gave up, lost 36 pounds in 23 days, and no one told me! We rushed him to a hospital as soon as we found out, but the spiral was so fast and he passed away. The COVID protocol killed him!”
Let that sink in for a moment: “The COVID protocol killed him.” I bet he and his wife would rather have taken their chances with the virus.

There are also stories of people who contracted COVID-19 who were vulnerable from other conditions and died as a result, but their families were denied contact and the patient died alone, without a chance for families to say goodbye.

Or the people on hospice who know they are dying of something other than COVID and have to face a painful death alone. When people are old enough and sick enough that they are dying anyway, they would just like what time they have left to be shared with the people they love. The governor’s executive order has denied them that final dignity.
Most of the stories involved elderly people, but one that particularly touched me was from the mother of a young adult man who resides in a group home. She writes:
“Before [the] COVID-19 lockdown, our son enjoyed going to his dayhab each weekday to work a job, visit with friends, play games, go on field trips, etc. He also rode horses at an equine facility and worked out with a college student in their physical ed program. His daily life was active and full. Now, he is confined to his room, even for meals, and he spends the days and nights watching TV and napping.”

She adds, “Although our son has an underlying health condition, as his guardians, we believe his quality of life has suffered long enough. Please don’t make the residents suffer another minute of lockdown. It’s cruel treatment.”

Some stories came from staff at the facilities. One such story tells of a woman whose son brought her a cheeseburger.  “I had to receive it from him at the door and give it to her. She was so thrilled to see him, and they chatted 8 feet apart through the door for about 15 seconds. When he walked away, she said to me, very proudly, ‘That’s my son!’ Then she began to cry … sob.”

Another response from an employee said, “Several times, patients have asked me, ‘What did I do? What did I do wrong now?’ I calmly and lovingly reply that they’ve done nothing wrong. But they don’t understand.”

I understand there is a desire to keep the most vulnerable populations (which are these people in nursing homes) safe from the virus. But at what cost to their quality of life? Or at what cost to their end-of-life experience? Staff members at the facility come and go every day, taking precautions, and seem to manage it safely. Surely there is a way to allow limited visitors under precautionary conditions, on a scheduled basis.

We owe these people so much more than we’re giving them! I hope the stories I’m sharing will prompt the people in charge to make a policy change that will relieve at least some of their suffering.

If anyone would like to read the stories in their entirety, I am publishing them a few at a time on my Facebook page, which is found at https://www.facebook.com/rhodesfran. I have a total of 19 COVID-19 stories. But I’m sure for every one of these, there are at least a hundred more untold.

I have sent the stories to Gov. Abbott, Lt. Gov. Dan Patrick, Texas Health and Human Services Commissioner Phil Wilson, and the state legislators in the districts the stories came from. State Rep. James White has also requested copies, as he is focusing on the issue.
It is my hope that by bringing these stories into the public view, other people will take up the cause and contact the governor, lieutenant governor, and their own state legislators and the HHSC. Public pressure is a powerful thing, and it can make a difference.

My favorite quote is from Sam Adams, who said, “It does not take a majority to prevail, but rather an irate, tireless minority, setting brushfires of freedom in the minds of men.”
So please join me in setting some brushfires of freedom on behalf of the people who are imprisoned in these facilities simply because they “might” catch a virus.
Interested readers can contact officials here: