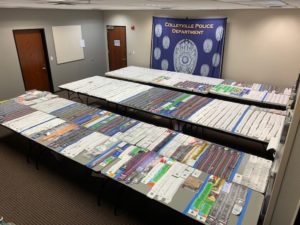 On Monday, January 31, 2022, the Colleyville Police Department, along with the U.S. Secret Service and the Tarrant County Criminal District Attorney’s Office, arrested a 56-year-old Asian female by the name of Ke Xu, along with a 67-year-old white male by the name of Robert J. Lang, both for Texas state charges of Engaging in Organized Crime, Theft from the Elderly, Money Laundering, and Exploitation of the Elderly.

Beginning in March 2021, the Colleyville Police Department took a report from a local resident who was scammed into purchasing thousands of dollars in gift cards after being led through a complex story about how they allegedly owed money for a Norton Antivirus scan. In partnership with Walmart Global Investigations, these law enforcement agencies initiated an investigation that developed into several gift card scams involving victims across the country, which resulted in the funds eventually being transferred to China. This investigation showed suspects quickly redeemed scammed gift cards within just four (4) minutes of the victim purchasing them to prevent anyone from being able to cancel the gift cards. In many cases, the gift cards were redeemed in a different state than they were purchased.

Colleyville Police Chief, Michael C. Miller, said, “These arrests are a small victory in a complex investigation that has targeted a large portion of the population, including many elderly victims. The work this team has done over the last year to track down these suspects is not only incredible, but is a true testament to their service to our communities and to the partnerships we continue to cultivate.”

As the Federal Trade Commission states, “Gift cards are for gifts, not for payments.” If a stranger purporting to be a legitimate company or government agency demands payment with a gift card, hang up or ignore the message. Scammers use this method of payment because it is difficult to trace. For more information, visit: https://www.consumer.ftc.gov/articles/gift-card-scams. In addition, if you or someone you know is 65 or older and has been a victim of financial fraud, help is standing by at the National Elder Fraud Hotline: 1-833-FRAUD-11.