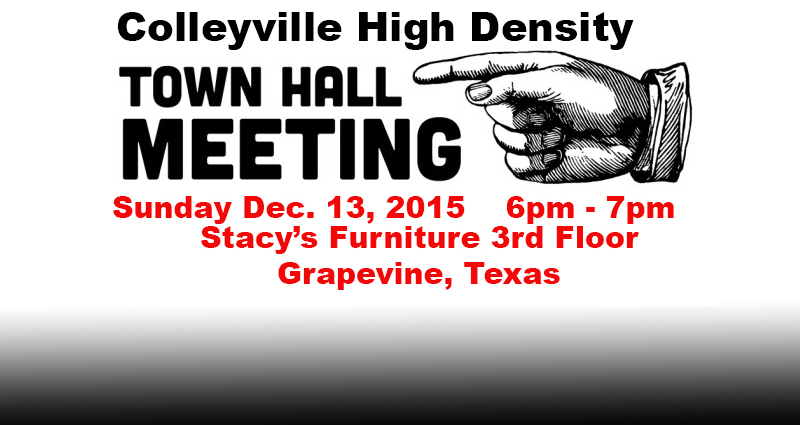 The article below ran in LocalNewsOnly in 2015 – It is relevant today for historical background as to what David Kelly’s mindset is, as he runs for Mayor yet AGAIN!

LocalNewsOnly.com is participating in a Citizen’s Town Hall Informational Meeting Sunday from 6 pm until 7 pm.  Due to the limited space availability in Colleyville, the meeting is being held at Stacy’s Furniture, 3rd Floor (please use the elevator) located at 1900 S. Main Street, Grapevine.  Attendees are requested to park toward the back of the parking lot leaving the front spaces for customers of the store.

The purpose of the meeting is to review the newest revisions of the “Comprehensive Plan.”  There have been two readings at City Council on November 17, 2015 and the second reading on December 1st.  As a result of significant opposition from citizens, at the November 17 meeting, city staff, and presumably the Mayor and selected Council Members, made significant changes to a written plan that encompasses around 200 pages.  The December 1, 2015 meeting witnessed an increasing number of citizens objecting to the plan described as “visionary” by Mayor David Kelly.

With the revised plan only days old, Mayor Kelly made a motion to adopt the plan and was then immediately seconded by Councilman Mike Taylor.  However, at the insistence of Councilperson Carol Wollin and Councilman Chris Putnam that more time should be given for citizens to review changes, the Mayor relented when Taylor withdrew his second.  After the Mayor agreed the item could be put on the agenda, but only if No Public Comments would be allowed, additional discussion pursued and it was finally agreed the December 15th meeting would be the final hearing for the plan and Public Comments would be allowed.

The revised plan has had changes including density calculations creating additional confusion and concerns.  The purpose of the Town Hall meeting is to review the revised plan and provide an opportunity to evaluate the overall impact PRIOR to the December 15th meeting.

Judging by the amount of objections that originally surfaced at the City Council meetings; there appears to be an extremely large number of citizens that hold a very strong conviction to preserve the “original vision” of density in their hometown.  As such, one should attend to learn if and how the proposed Comprehensive Plan will adversely impact the density commitment and charm of Colleyville dating back 50 years.

LNO believes an informed citizenry is the best kind and encourages those interested in the density issue to take an hour to attend this important informational meeting.