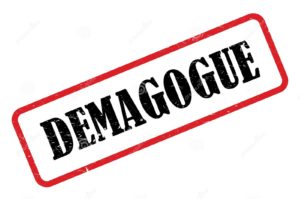 Colleyville’s Demagogue Trio will Once AGAIN Attempt to Derail Lindamood

Let’s look at the players in the 2022 City of Colleyville City Council opponents.

The Original Demagogue McCarthy was a hair-trigger demagogue; an ambitious thinker who could make the most unhinged sort of claim appear both copiously researched and politically urgent.— Chris Lehmann, The New Republic, 23 Nov. 2021

Now comes, once again another cycle, whereby Mike Taylor, Chuck Mogged, and Jim Fletcher
have virtually already committed to another election cycle of vile, malicious, vindictive attacks on Colleyville’s current Mayor Pro Tem, Bobby Lindamood, who will be on the ballot despite Colleyville’s self-appointed Demagogue.

Bobby Lindamood, current Mayor Pro Tem of Colleyville, is running to be the next Mayor of the City of Colleyville, representing the existing city council, remembering Mayor Richard Newton and this city council were instrumental in passing the “two term limit” on city council; which  limits all to two terms. (Versus the 11 year Mayor, David Kelly, seeking yet another two terms.)

Again this year the Demagogue Trio (that were originally sued by Lindamood), will rise their twisted concept of what Colleyville elections should look like.

Considering the Demagogue Trio have set themselves up as judge and jury (of course ignoring a multi-million lawsuit filed by Bobby Lindamood against the trio), it would seem reasonable that the character of the Demagogue Trio be considered for their own credibility.

First, we visit some background on Mr. Fletcher. Everyone knows Jim Fletcher, a staunch Democrat, moved into a sea of conservative activists when he landed in Colleyville, but never left behind his futile efforts to somehow make Colleyville his personal platform.

The Fletcher-Taylor- Coplen Et.Al. Are Still At It Right up to Election

The Fletcher-Taylor- Coplen Et.Al. are Still At It Right up to this Election in 2022.

Next comes Demagogue wanna be, Chuck Mogged, in the attack on Lindamood. Mogged’s house in Colleyville politics is an effort “Now you see me, now you don’t. See link below concerning Modgged who is up to his neck in the vile attack on Mayor Pro Tem Bobby Lindamood, running for the Mayoral seat this election.

There are a number of unflattering elements that Mogged has been involved, including during his brief stint on Colleyville City Council, his un-ethical conduct in asking a paid employee of the City of Colleyville to help him write an opposition piece concerning the plans to improve Glade Road.

Next and finally comes the King of Demagogues in Colleyville , one Michael Taylor, as noted in the following links.  Readers should consider those trying to derail the next Mayor of Colleyville, Bobby Lindamood, with their despicable individual activities in past elections at several levels. Links provided below:

Shouldn’t Mike Taylor be Subject to Investigation per the Colleyville City Charter..

An Editorial from the 2006 Race of Mike Taylor