World War I was called the war to end all wars.  A total of 65 million soldiers fought in that war; 21,000,000 of them were wounded and nearly 9,000,000 killed.  Historians have spent a whole bunch of years trying to figure out what that war was all about, and many of them point straight to the emperor of Germany, Kaiser Wilhelm the Second, as the culprit who engineered the whole thing.

Wilhelm was the grandson of William the First of Germany and of Britain’s Queen Victoria.  He was well known for his tendency to talk too much.  He seemed to know nothing about tact and diplomacy.  London newspapers loved to repeat his outbursts.  And when they reported him saying that the German people just didn’t like the British, the ill will between the two countries shot up overnight.  Some say Wilhelm didn’t really want war, but he didn’t seem to mind the idea if it would help him reach his most prized goal, which was to turn Germany into a great empire, a country to be reckoned with.

In the early 1900s, the Kaiser stretched British nerves to the breaking point when he started building German battleships.  The powers around him could only imagine one purpose for all those warships.  England was so nervous that it made alliances with Russia and its old archenemy France.

And, well, you probably know the rest.  When the heir to the Austro-Hungarian throne was assassinated in 1914, war had come to Europe.  If you’re up on your history, you remember that America finally took up arms in that one when German submarines started attacking any ship in the Atlantic and finally sunk the Lusitania, which just happened to be carrying U.S. citizens.  That was in 1917 and by 1918 the treaty of Versailles was signed and the great war was over.  Wilhelm was forced to abdicate and when the peace treaty demanded that he be tried for promoting the war.  He fled to Holland and sanctuary.

But there’s a bit more to this story.  One of his more impetuous acts made him famous when he was still Prince.  It seems Buffalo Bill Cody had brought his Wild West Show to Berlin and Wilhelm had a front row seat.  But the prince couldn’t stand to sit on the sidelines, so when one of the troupe’s young performers got up to show off a rare shooting skill, he issued a challenge, daring the young marksman to shoot the very cigarette he was smoking from his mouth.

The shooter accepted the challenge.  Wilhelm put the cigarette in its holder, then clenched it in his teeth.  The marksman stepped back 30 paces and took aim.  Well, the cigarette flew out of his mouth and Wilhelm lived to tell about it.  But later, the shooter wondered if a chance might have been missed to do the world a favor.

“If my aim had been poorer,” the wild west performer recalled, “I might have averted the great war.”

It’s a Little Known Fact that only one in a handful of sharpshooters could have made that shot and saved the Kaiser’s hide.  And this time, the marksman happened to be a woman.  That would be, of course, America’s very own Annie Oakley. 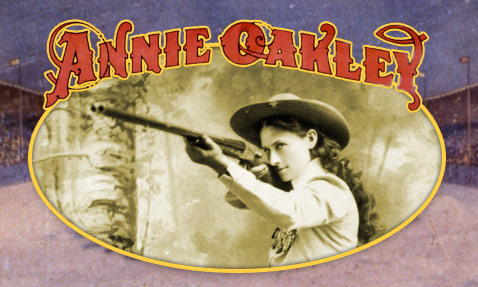