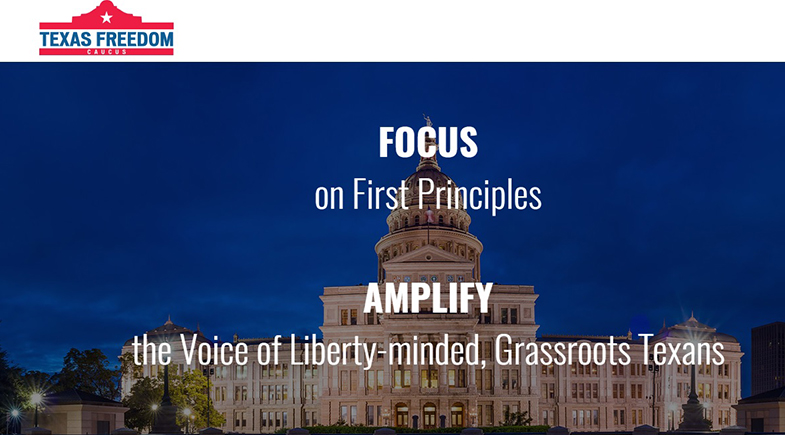 The Texas Freedom Caucus was launched today in the Texas House of Representatives.  The Texas Freedom Caucus’ mission is to amplify the voice of liberty-minded grassroots Texans who want bold action to protect life, strengthen families, defend the bill of rights, restrain government and revitalize personal and economic freedoms in Texas.

The Texas Freedom Caucus (TFC) will be focused on first principles that are the hallmark of liberty-minded Texans.  The policies supported by the TFC will be developed thru collaboration with grassroots leaders to identify priorities that are often dismissed in Austin.

“Go five blocks in any direction from the Texas Capitol, and you will see what interests are hard wired into the Austin establishment,” Caucus Chairman Rep. Matt Schaefer (Tyler) said. “The mission of the Texas Freedom Caucus will be to hard wire liberty-minded grassroots into policy making in Austin.”

The TFC will engage grassroots Texans on matters before session, during session, and long after session when policies are implemented at the agency level. The caucus is committed to restoring first principles – the right to life, liberty and property that are at the core of the freedom of America and the exceptionalism of Texas. The caucus will outline a set of legislative priorities after it holds a series of discussions with grassroots representatives from all across Texas. Thereafter, the TFC will support or oppose legislation in accordance with those principles.

“We don’t want our priorities to be determined from Austin down, but from the grassroots up. That includes taking things like the Texas Republican Party platform seriously,” said Schaefer. “There are thousands of people too busy working and raising their families to embed themselves in the legislative process. Their voices matter too, and we want to make sure they are heard, and their efforts are multiplied.”

The Texas Freedom Caucus will share many policy goals with other existing conservative organizations and caucuses, and it will buttress and complement rather than compete with those groups.  The TFC will distinguish itself by providing a specific focal point for grassroots Texans interested in conservative policy-making in Austin.