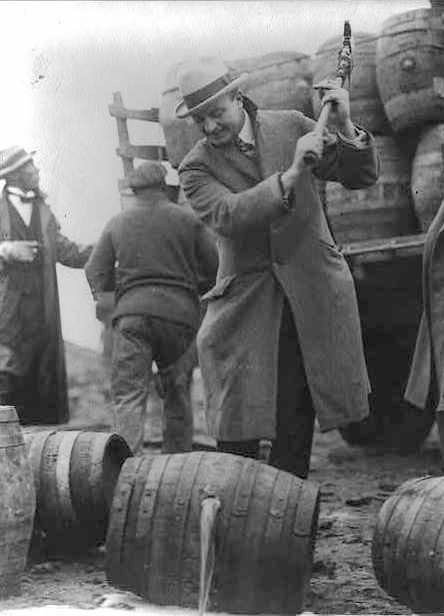 JANUARY 16, 2020
From the U.S. Department of Justice, Office of Justice Programs, National Criminal Justice Reference Service (NCJRS): Report on the Enforcement of the Prohibition Laws of the United States (January 7, 1931)

I. NATIONAL PROHIBITION, 1. The Eighteenth Amendment and the National Prohibition Act (page 13)

“On December 18, 1917, the joint resolution was adopted by both houses with the required constitutional majority and was transmitted to the states for their consideration. On January 29, 1919, the Secretary of State, by proclamation, announced that on January 16th thirty-six states had ratified the amendment and therefore it had become a part of the Constitution. It was subsequently ratified by ten additional states. It became effective on January 16, 1920, as the Eighteenth Amendment to the Constitution, the pertinent sections of which are as follows:

Philadelphia, PA, director of public safety Smedley D. Butler uses an axe to destroy kegs of beer and dump their contents into the Schuylkill River in 1924. During his 2 years in charge of public safety,Butler raided hundreds of speakeasies and cracked down on illegal alcohol manufacturing, gambling,prostitution, and corruption.

Photo courtesy of the Library of Congress

On January 16, 1920, in accordance with the 18th Amendment to the U.S. Constitution, the National Prohibition Act (also known as the “Volstead Act”) enforced the prohibition against the production, importation, transportation, and sale of alcoholic beverages in the United States. For the next 13 years, halting the flow of illegal alcohol proved to be the bane of the nation’s Prohibition agents but a boon for organized crime, speakeasies, and bootleggers.

Religious and temperance groups advocated prohibiting the sale and consumption of alcohol in the United States as early as the first decades of the 19th century. Maine became the first state to outlaw the sale of alcoholic beverages (except for industrial and medicinal purposes) in 1846. Following the 1873 founding of the Woman’s Christian Temperance Union

(WCTU), first president Annie Wittenmyer worked to raise awareness of alcohol’s role in the rising number of spousal abuse incidents. Eight years later, the WCTU succeeded in lobbying Kansas’ legislators to prohibit the manufacture of alcohol in the state.

In 1893, the fight against alcohol gained a new and powerful ally in Rev. Howard Hyde Russell who founded the Anti-Saloon League in Oberlin, OH. The organization’s rapid expansion and political influence coincided with the spike in corruption, prostitution, domestic violence, and vagrancy that city dwellers witnessed in the nation’s fast growing urban centers. Aggressive lobbying by the Anti-Saloon League and the WCTU—along with their alliance with the Women’s Suffrage Movement—led Oklahoma, Georgia, Mississippi, North Carolina, and Tennessee to pass prohibition legislation during the first decade of the 1900s. Limitations on the availability of alcoholic beverages during World War I helped anti-alcohol advocates convince Congress that the nation needed lasting federal prohibition legislation.

On August 1, 1917, a U.S. Senate-passed resolution proposed language for a constitutional amendment prohibiting the sale, manufacture, and distribution of alcoholic beverages in the United States. A revised resolution passed the U.S. House of Representatives and Senate on December 18, 1917. Many states already had local legislation regulating alcohol, so state legislatures quickly affirmed the amendment. Mississippi was first to affirm the amendment on January 7, 1918, and Nebraska’s approval on January 16, 1919, made nationwide Prohibition the law of the land. One year after the 18th Amendment’s ratification, the United States went “dry” on January 16, 1920.

The 18th Amendment nationalized prohibition, but because it did not define the term “intoxicating liquors,” federal and state governments were required to determine methods for enforcing the law. When voting for the 18th Amendment in 1917, many Americans and members of Congress assumed the legislation referred only to “hard liquor” and exempted beer and wine. However, thanks to the lobbying efforts of Anti-Saloon League leader Wayne Wheeler, the prohibition against “intoxicating liquors” encompassed any beverage containing more than .5 percent alcohol. The House of Representatives and Senate passed the National Prohibition Act (popularly known as the “Volstead Act”)—coauthored by Wayne Wheeler—on July 22 and September 5, 1919, respectively. Expressing concerns that the Volstead Act infringed upon American’s civil liberties, President Woodrow Wilson vetoed the bill on October 27, 1919. The House of Representatives overrode the president’s veto within hours. Following the Senate’s vote to override Wilson’s veto, the Volstead Act became law on October 28, 1919.

Over the next 13 years, more than 1,500 prohibition agents like Eliot Ness, Tom Threepersons, and Frank Hamer (famous for tracking down notorious outlaw couple Bonnie and Clyde) attempted to enforce the Volstead Act while bootleggers and gangsters like Al Capone, Charles “Lucky” Luciano, Benjamin “Bugsy” Siegel, Enoch “Nucky” Johnson, Arnold Rothstein, and Carlo Gambino thumbed their noses at the 18th Amendment. Despite vigorous enforcement efforts that included the seizure of more than 1 million gallons of illegal alcohol and the arrest of thousands of gangsters and bootleggers, America’s taps continued to flow and organized crime flourished.

By the early 1930s, the United States was locked in the grip of the Great Depression and Americans were growing increasingly weary of the violence associated with Prohibition. More importantly, Congress began reexamining the value of tax revenues generated by the manufacture and sale of alcohol. Members of Congress introduced dozens of bills to amend the Volstead Act or repeal the 18th Amendment. During the 1932 Presidential Election, Democratic candidate Franklin D. Roosevelt told supporters it was “time to correct the ‘stupendous blunder’ that was Prohibition.” Incumbent Republican candidate Herbert Hoover was unwilling to voice a similar belief for fear of alienating anti-alcohol voters.

On November 8, 1932, Roosevelt defeated Hoover in a landslide victory, garnering more than 57 percent of the vote and carrying 42 of the nation’s 48 states. In February 1933, Congress passed the Joint Resolution Proposing the 21st Amendment to the United States Constitution (“Blaine Act”) proposing the repeal of the 18th Amendment. Less than 3 weeks after moving into the White House, President Franklin D. Roosevelt signed the Cullen-Harrison Act

into law on March 22, 1933, which amended the Volstead Act so the production of some beer and wine was legal. The next month, Michigan led the states in affirming the repeal of the 18th Amendment on April 10, 1933. On December 5, 1933, Utah’s affirmation of the Blaine Act ratified the 21st Amendment. Later that day, President Roosevelt issued a proclamation stating that, “The policy of the Government will be to see to it that the social and political evils that have existed in the pre-prohibition era shall not be revived nor permitted again to exist . . .I trust in the good sense of the American people that they will not bring upon themselves the curse of excessive use of intoxicating liquors, to the detriment of health, morals, and social integrity.” The 13-year experiment with nationwide temperance was over.

You can learn more about Prohibition and the intoxicating beverages that led to its passage and repeal using census data and records. For example: