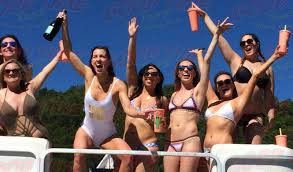 Perhaps the hardest part of the whole lockdown has been the fact we’re unable to go out and enjoy ourselves: see friends, go to a bar, kick back, have fun… obviously it’s been for the greater good, but there’s no doubt that people across America have missed seeing their friends.

It’s no wonder, then, that the concept of virtual partying has emerged from the pandemic; if we can’t meet people in real life, then we’ll meet them on-screen instead! The growth and popularity of various different social media and online tools, from Zoom to Houseparty, has fuelled our ability to congregate with others, just in a different way. And virtual parties, where people sitting, isolating at home, can chat and drink ‘together’, have taken off, big time.

So just how much are we virtual-partying? Leading lifestyle, gear gadget and style website, Improb.com, wanted to find out where America’s ‘virtual’ party hotspots are, and surveyed 3,100 locked down Americans. Firstly they found that, on average across the country, we attend a virtual party with friends 3 days a week; a pretty sociable amount, you’ll agree. But there are differences between locations… and it turns out that Texans are among the hardest-virtual-partiers in America, attending 4 virtual parties each week, on average. Phew! Well, at least they get a few evenings off… The least sociable states include Louisiana, Maine and Oregon, who only virtually-party 2 days per week.

Improb.com have created an infographic showing the virtual party hotspots in America

Even though the party is virtual, the alcohol most definitely isn’t! 1 in 10 of us admit to experiencing more hangovers during lockdown than before it started.  This is probably because the average number of drinks people consume at the party is 4; and with nearly half (48%) of us saying our favorite beverage is beer, it’s little wonder! Nearly a third (31%) prefer wine, 13% drink spirits, and 8% indulge in cocktails.

Just because it’s a virtual do, doesn’t mean people aren’t making an effort, either; over a quarter of us (26%) get dressed up or put on make-up for our video-fest. And some are so keen to attend as many as possible that they gatecrash other people’s parties! 10% admit to having done so, something that’s easily done on apps like Houseparty, for example.

The good news is, people are still flirting and trying to find love online. On average, single Americans are going on 5 virtual video dates per week – which seems like a lot, but it could be because it’s easier to arrange a couple of dates on the same evening. It’s not like you have to leave the house and go anywhere, after all! Men are dating more, with 5 per week compared to women’s 4.

‘One positive thing to emerge from lockdown is the frequent communication we are able to maintain with our loved ones due to video calling technology, so we are able to take a break from reality to talk to our friends and family,’ says Alex Coleman at Improb.com. ‘In between group calls, it is also important to check in with your friends and see if they need someone to talk to during this time, especially if they are isolating on their own.’