After saying that when ask if he missed the Washington scene..the President said an emphatic NO..however, he says what he does miss the most is the opportunity to salute our military personnel.

During Dana’s appearence she said the book contains personal stories about President Bush never told before.  She said the President was like a second father to her.  Dana contributes part of her success as White House Press Secretary to the fact she felt connected to the President and could anticipate his responses.  She said that before she gave any response to a question, especially a hostile one, that she would first think, how would the President handle the situation.  She always wanted the President to be proud of her civility in a manner that would mirror the President. 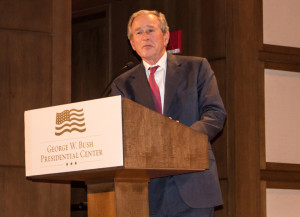