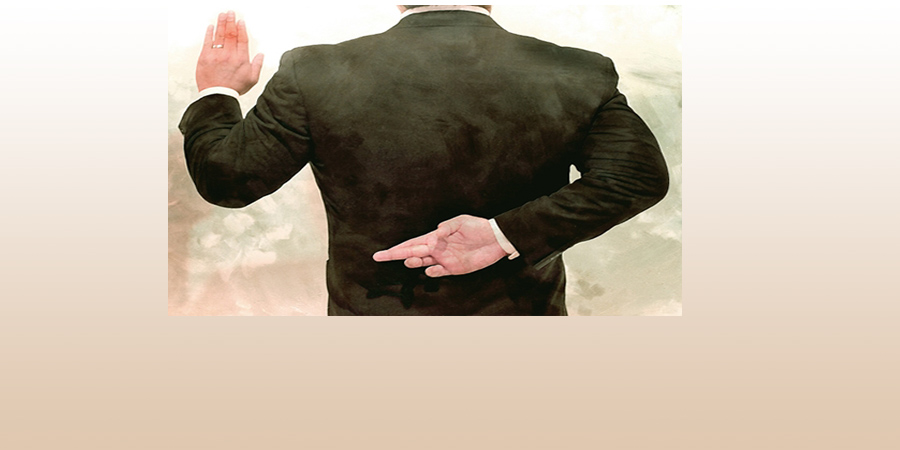 Another Misrepresentation by A Colleyville Council Member?

Under the Category of; Even I have been surprised by the actions of members of the current Colleyville City Council; now comes an eyewitness account that seems to make Councilperson Nancy Coplen’s explanation of photo taking activities at the polls even less plausible.

Ms. Coplen who threw in hook,line and sinker, with  fellow council member Michael Taylor and the “Protect Colleyville” Glade Road group, a group now exposed using their own emails as deceiving the citizens in the May 2015 election;  she now appears to have gone “all-in,” including adopting their tactics.

However, now that it has been revealed that the Election Judge at her initial “Photographing Poll location” was Jan Mogged (Councilman Chuck Mogged’s wife); it seems that minor detail was left out of Coplen’s explanation.

How was it that Coplen was alerted to additional activity at the polls; surely it could not have been from Ms. Mogged, THE ELECTION JUDGE!

In retrospect, since this was an election that only featured State Propositions (that all passed overwhelmingly), exactly which proposition did Coplen feel anyone may be attempting to unfairly campaign on it’s behalf? Can one now believe that Coplen was at the polls only out of her burning desire as a private citizen to make sure no one unfairly campaigned for a State Proposition?

Surely this could not have been an attempt to intimidate voters who where being given information concerning the High Density plans of this City Council?  No surely it was!

After receiving the eye witness account below, I think it will be hard for any independent thinker to buy  into Coplen’s explanation of why she was taking photos of voters AND their Cars!.

Was someone’s car in violation of the election set back?  If not, what was the purpose of taking these photos. Getting license plates to see who the owners were that might be receiving information about High Density plans of her City Council?

No, as unpleasant as this may sound; this tactic appears solely meant to intimidate voters and those discussing the High Density plans of the City Council.  Do not be fooled by Coplen’s sudden conversion into a High Density skeptic; this is brought on by the pressure citizens brought to bear at the last City Council meeting; not a sudden epiphany that High Density may not be good for Colleyville.

The following eye witness account was receive by LNO today.  LNO will not publish the name because of the intimidation tactics described above.

I wanted to clarify something from your article where Nancy Coplen was referring a young man of breaking the solicitation law at one of the election sites by 50 feet.

I came to vote at Covenant Church and noticed a young man handing out literature, I read the material and decided to stay and help hand out the flier. The young man and I abided by the rules as a marker was posted by The Election Judge Jan Mogged’s (Councilman Chuck Mogged’s wife) and her crew. We stayed behind the marker at least 20 feet greeting people with a simple informative piece of paper.  A person was directed to come out and remeasure the distance in the parking lot. What he had found was they miss marked the measurement by 2 car spots, and we gladly backed up. All the while having a great conversation with the election volunteer. A second man came out 20 mins later and remeasured again saying they measured from the wrong set of doors …… we gladly backed up again.

It was at the mistake of the election committee and the volunteers. No harm – no foul, but not at the chance this young man was breaking the rules, at any angles to the election code.

I also visited the election site on 26 and passed Mrs Coplen on her way out of the parking lot. When I reach those who were there handing out fliers, they informed me that she had been taking pictures of them and their cars. I noticed they also were well beyond the marker and not bothering anyone.

I’m not saying Mrs. Coplen was wrong or right for taking pictures (we are all subject to technology now days), but I did want to clarify and clean up any accusations of wrong doing. I witnessed it first hand.

Initially , LNO reported witnesses to the council member taking photos stated that a number of photos were taken primarily of individuals who had stopped to talk about the High Density Petition. The Council member identified was Nancy Coplen. LNO requested a written response explaining why she was taking photos; and  she responded as follows;

“As a trained poll-watcher and election judge, I’ve worked with others to ensure voting integrity at polling locations in Pennsylvania, New Mexico, Iowa, New Hampshire and Virginia over the last two decades. As a private citizen and longtime advocate of integrity at polling locations, I know the requirements for citizens to fairly and legally promote a candidate or proposition. This past election on 3 November, I witnessed a young man violating the 100′ marker by being within 50′ of the poll while electioneering with a flyer of an unknown subject. This was most likely because he had not been properly instructed on the distance limits. I informed an election judge who I assumed would instruct the young man on this regulation. After hearing some reports from other citizens of electioneering at some of the other 6 Colleyville polling locations, I checked them out and was able to confirm that the 100′ electioneering regulation was being observed.”

From the May 2015 Election flyer with information contained that was known to be untrue is the campaign team of Coplen and Taylor; along with the tag line,
“Nancy Coplen and Mike “Taylor are public servants we can trust. There is no “On-the-Job” training needed.”

It certainly appears at least one of these statements is true! 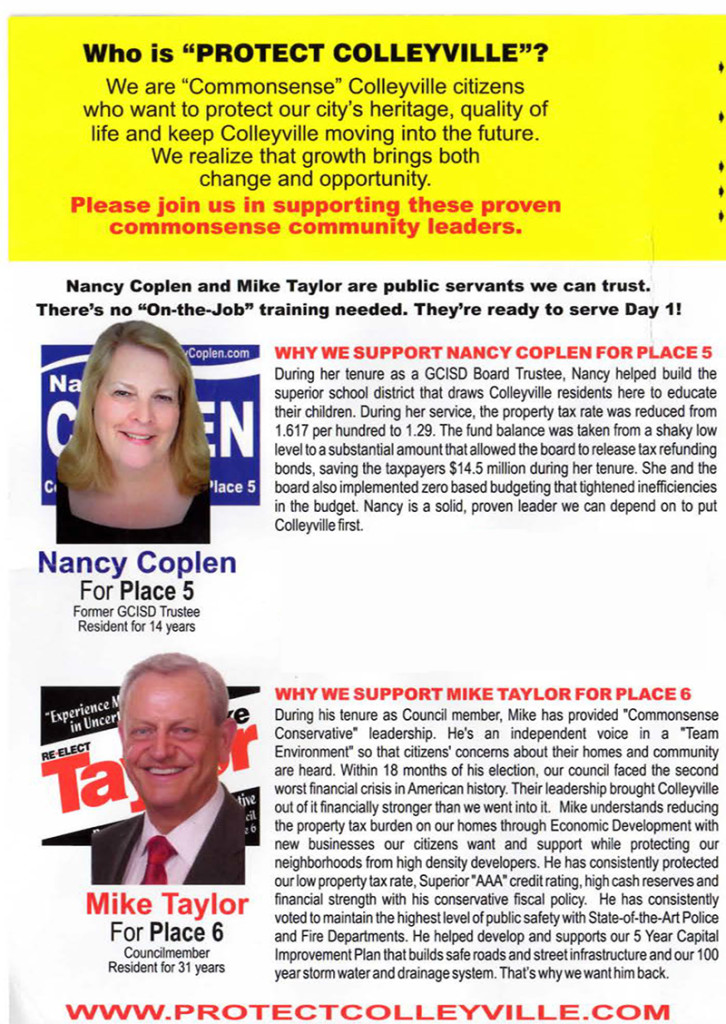