Colleyville the safest city in Texas in its 2016 survey of the state.

Valuepenguin.com has named Colleyville the safest city in Texas in its 2016 survey of the state.

Almost five million Americans moved to Texas between 2005 and 2013, and you can bet finding a safe community was a major priority for each one of them. With so much population growth, the ValuePenguin team analyzed the most recent FBI Crime Report to determine the safest places in the Lone Star State.

These 217 cities have populations of at least 10,000, and the crime scores ranged from 321 to over 7,000. Four out of the five of the safest places are suburbs of major cities with high percentages of well-educated, high-income professionals. All of the safest cities in Texas pride themselves on an excellent relationship between law enforcement and its citizens. You can review the report to see how the 217 cities rank.

These cities have an average crime score of 354, which is 82% lower than their typical peer in the state. With some of its lowest total violent crime rates, these five are the safest places in the state.

This mid-sized community (population of 24,915) 15 miles from Fort Worth offers safety for people and their property. It had the lowest rate of property crime rate for any city in this study, and Colleyville also had a mere 10 violent crimes reported in 2014. The police department has an e-tips program that helps citizens stop crime. It is a very affluent community where the median household income was $98,593 above the Texas median household income, and almost 65% of the population holds a bachelor’s degree.

The safest small place (population of 11,848) comes in at number two overall in this report. Memorial Villages is a group residential community that is independent of Houston. The police department serves the villages of Bunker Hill, Piney Point, and Hunters Creek and has strong community engagement. It had the third-lowest rate of property crime and the fourth-lowest rate of violent crime.

This small town is slightly over 30 miles from Fort Worth and about 33 miles from Dallas. Trophy Club had the second-lowest rate of property crime in the state and only seven violent crimes in the year analyzed. The police department offers a Vacation Watch/Close Patrol for its residents. It is another affluent community; the median household income is 2.4 times the median household income for Texas as a whole and almost 64% of the residents have at least a bachelor’s degree.

Highland Village, a city of just under 16,000 in Denton County, comes in at number four. In addition to a low amount of violent crime, this analysis found that Highland Village had the fourth-lowest rate of property crime. The police department uses a Community Oriented Public Safety (COPS) model to deliver such good results to its residents. This community is the third one in the Dallas-Fort Worth metro area to make our list. Highland Village is another city where residents had a high median household income ($133,161 versus just over $52,000 for Texas), and the population is well-educated (almost 56% of residents hold a bachelor’s degree).

Canyon boasts that it is unlike any other city in Texas, and the community of 14,055 differs from other cities in this study because it is outside of Amarillo. The city is home to West Texas A&M University and near a number of tourist attractions, including beautiful Palo Duro Canyon State Park. In addition to a low level of property crime, the city reported only nine violent crimes in the year surveyed. With a median home value of approximately $144,000, it is more affordable than other cities on our list. 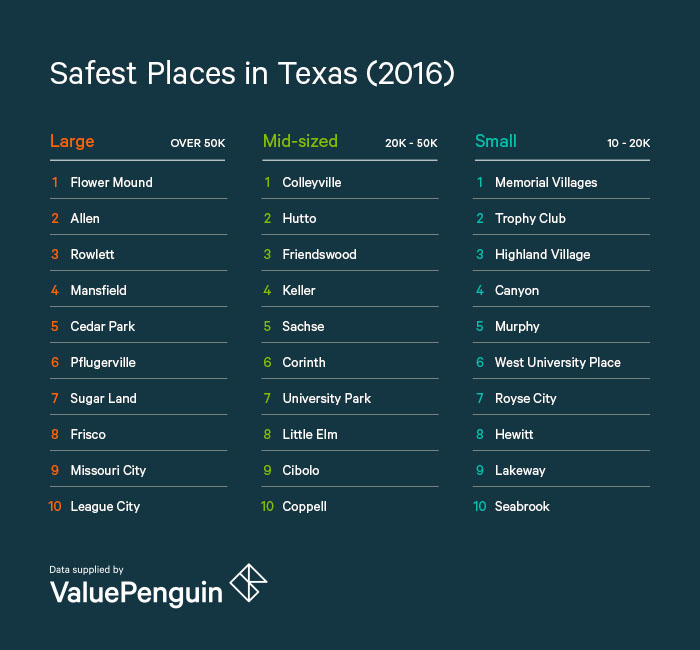 Below is the entire list of places that we included in our “Safest Places in Texas” study. They are listed from the safest to the least safe, according to our analysis. The calculation for the crime scores can be found in the methodology section below. Take a look at the graph and see where your hometown ranks.

You want an environment that is consistently safe, and the top five cities all delivered great results in both 2015 and 2016. Three of this year’s top five cities — Colleyville, Memorial Villages and Highland Village — were in the top five last year. Trophy Club and Canyon, the new members of the top five, were among the top ten safest small cities in 2015.

Small cities with under 20,000 population took four out of the top five spots in both 2015 and 2016. However, small does not always equal safe. The two least safe cities had populations of less than 20,000. This result differs from 2015, when the least safe city was a large city.

Not everyone wants to live in a small city, and Texas offers some very safe large cities. Eight of the top ten safest large cities in 2016 were repeats from 2015. Flower Mound, a community of over 69,000 in the Dallas-Fort Worth metro area, was the safest large city in both years. You can see how communities compare here.

To rank these places, we collected data from the 2014 FBI crime statistics by city, which provides the most recent crime data available. Not every town participates in this report and we also excluded towns with fewer than 5,000 residents because towns with small populations are more sensitive to crime score fluctuations for fewer crimes committed. The raw data report included property crimes (burglary, larceny-theft, motor vehicle theft, and arson), and violent crimes (murder/manslaughter, forcible rape, robbery, and aggravated assault) from all law enforcement agencies that chose to partake in the FBI Uniform Crime Reporting program.

Here is an alphabetical table of all cities included with their ranks, making it easier to compare different cities. See where your city lies!