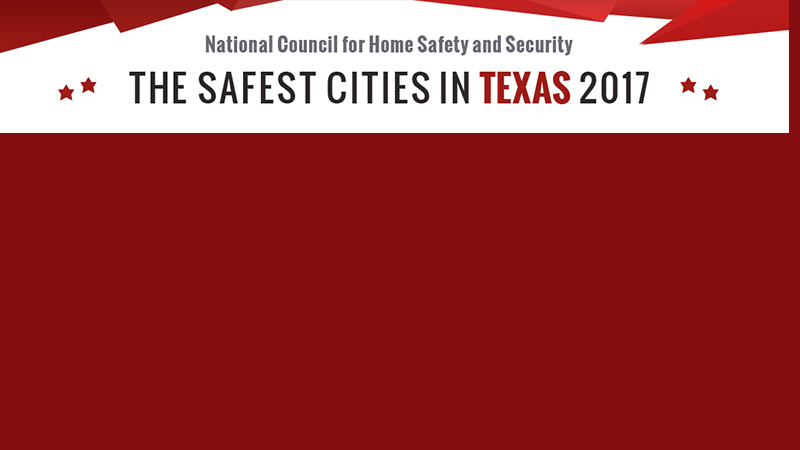 It may be a surprise to some that the official motto of Texas is “Friendship,” considering that the one they’d likely see on a T-shirt is “Don’t Mess with Texas.” But that’s exactly the kind of state Texas is: big, bold, and not afraid to speak out. The second-biggest state in the union, Texas only lags behind Alaska in size—and only lags behind California in population to boot. In fact, Texas has 4 of the country’s 12 most-populated cities: Houston, San Antonio, Dallas, and Austin, its capital. This concentration of population has helped draw a total of 54 Fortune 500 companies to the state, as well as some of the country’s most popular sports teams, including the San Antonio Spurs, Dallas Mavericks, Dallas Cowboys, Houston Texans, Texas Rangers, and the University of Texas Longhorns.

Throughout its history, Texas has been ruled by Spain, France, and Mexico, and it has also been an independent republic, part of the Confederate States of America, and, of course, part of the United States of America. After the Civil War, the state’s cattle industry was responsible for much of the economy, and it’s the main reason why the state is associated with cowboys even to this day. It’s that image of freedom, along with economic opportunities and warm weather, that keeps drawing people to move to the state.

Safety has always been an important factor when searching for a new place to call home, but a wavering political system combined with an increase in violent crime has made safety the number one priority for many Americans. Because navigating through crime statistics can be a difficult and time-consuming process, we’ve done it for you.

Named after the American businessman, soldier, explorer, and writer Kermit Roosevelt, who also happened to be President Theodore Roosevelt’s son, the city of Kermit adopted its name after the 26th president visited in person. These days, this town is known as the safest in the state, and experienced just 2 violent crimes and 18 property crimes last year. Located in the northwest part of the state, along the indent that hugs the Oklahoma border, Kermit was originally established as a supply center that could serve the various scattered ranches in the area. After a drought, the town was almost entirely abandoned, until only one family remained. But when oil was discovered in 1926, a population boom energized the town again. 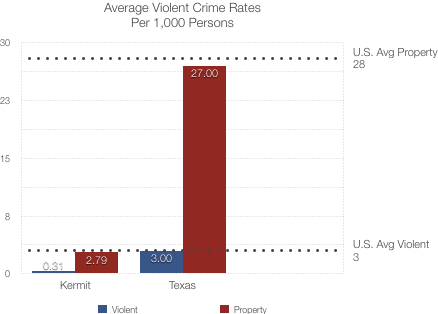 An upscale suburb located in the greater Dallas-Ft. Worth area, Trophy Club is home to around 12,153 residents who probably tell everyone how cool the name of their town is. Trophy Club is also one of the safest cities in Texas, seeing just 3 violent crimes and 41 property crimes last year. Located just a cowboy hat’s toss from Grapevine Lake, Trophy Club surrounds the Trophy Club Country Club, which boasts a golf course designed by golf legend Ben Hogan. Residents also enjoy easy access to inviting parks such as Oak Grove Park, and is located approximately 30 minutes from downtown Dallas via car. 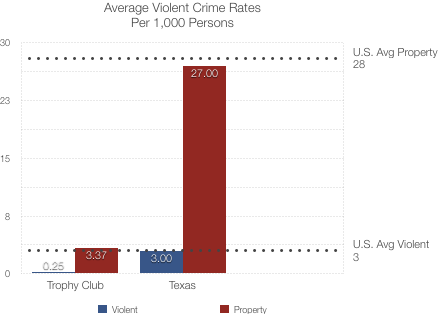 Also a part of the Dallas-Ft. Worth area, Colleyville is located just about 3.5 miles away from Dallas-Ft. Worth International Airport, making it a great place to live for those who travel a lot, or just enjoy the sound of 747s flying overhead. Home to roughly 25,491 residents, Colleyville is an affluent town that’s also quite safe, experiencing a mere 0.55 violent crimes and 5.14 property crimes per 1,000 people last year. Golf aficionados have plenty of options to hone their game in the area, including Sky Creek Ranch Golf Club, Timarron Country Club, and Bear Creek Golf Club. It has also served as home to many of the area’s wealthy and famous over the years, including MLB player Ivan Rodriguez, NFL player DeMarcus Ware, and several PGA golfers, including Chad Campbell. 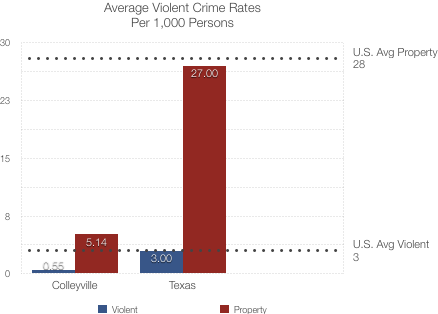 Neighboring the 289-acre Heard Wildlife Sanctuary in northeast Texas, Fairview is a close-knit town of 8,648 residents. Last year, it experienced just 4 violent crimes and 51 property crimes, making it one of the five safest towns in the entire state. The official motto of Fairview is, “Keeping it Country,” which is – quite honestly – pretty darn cool. Residents also have close access to McKinley National Airport, golf courses such as the Heritage Ranch & Golf Country Club, and the sizable Lavon Lake. As for the aforementioned Heard Natural Science Museum & Wildlife Sanctuary, it boasts nature trails, gardens, and an 1880s prairie village. 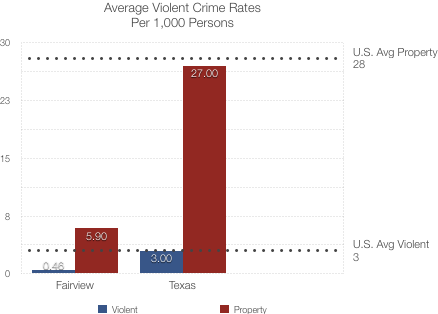 Home to around 8,176 residents and part of the sprawling Dallas-Ft. Worth metroplex, the city of Heath squeaks into the top 5 safest cities in Texas, seeing just 2 violent crimes and 56 property crimes last year. It’s located right on the scenic Lake Ray Hubbard and is just 25 miles from downtown Dallas via car. Locals enjoy the rolling hills, distinctive homes, and views of the Dallas skyline, as well as seeing sails stiffen with wind as boats crash against the waves while pulling away from the Rush Creek Yacht Club. 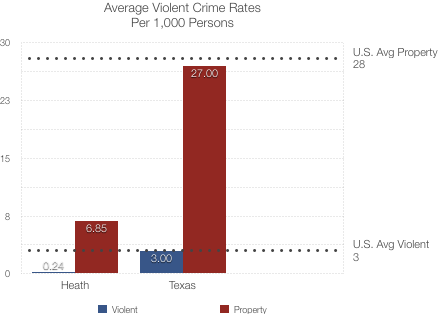 To identify the safest cities in Texas, we reviewed the most recent FBI Uniform Crime Report statistics along with our own population data and internal research. We eliminated any cities that failed to submit a complete crime report to the FBI and removed cities with populations under 5,000. Note that our use of the word “cities” is versatile, refers to populations of 5,000 and over, and thus includes places with the words “town” and “township.”