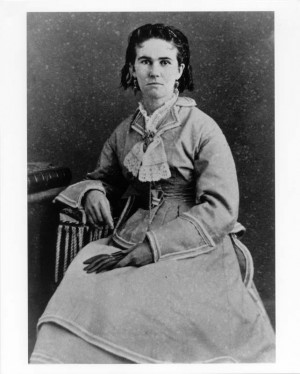 In 1873 Lizzie E. Johnson Williams purchased a lot in Austin, where she later resided in a two-story home and conducted school on the first floor. She later kept books for cattlemen and invested in cattle and land. She was teaching in Austin as late as 1880. Through her bookkeeping and her acquaintance with prominent cattlemen and investors of the day, including George W. Littlefield, William H. Day, and Charles W. Whitis, she recognized the profits to be made in cattle. On June 1, 1871, she registered her cattle brand under the name of Elizabeth Johnson. Two days later she made her first real-estate transaction by purchasing ten acres of land in Austin from Whitis for 3,000 gold dollars.

She achieved legendary status as an early Texas “cattle queen” and is thought to be the first woman in Texas to ride the Chisholm Trail with a herd of cattle that she had acquired under her own brand. Before her marriage to Hezekiah G. Williams on June 8, 1879, the couple signed a premarital contract allowing her to retain control of her financial affairs and keep her property separate. Although much of the land she eventually acquired was originally owned by her husband, she was thought to have been the controlling influence in his business dealings.

She presumably assisted her husband in his attempt to take the county seat away from San Marcos after the Hays County Courthouse burned in 1908. The couple built a town called Hays City on their ranch in Hays County, but their colonization scheme failed and the town ceased to exist.

Hezekiah ostensibly conveyed all of his property to Lizzie on July 30, 1896, but the document he had signed was not officially recorded and filed until seventeen years later, when he was in poor health. After her husband’s death in 1914, Lizzie grew increasingly reclusive and eccentric. She also had a reputation for being miserly. Because she sometimes appeared to be impoverished, Austinites were startled to learn after her death that Lizzie Williams had amassed almost a quarter of a million dollars. Her holdings included property in Travis, Llano, Hays, Trinity, Culberson, and Jeff Davis counties. She died on October 9, 1924, and is buried in Oakwood Cemetery in Austin.