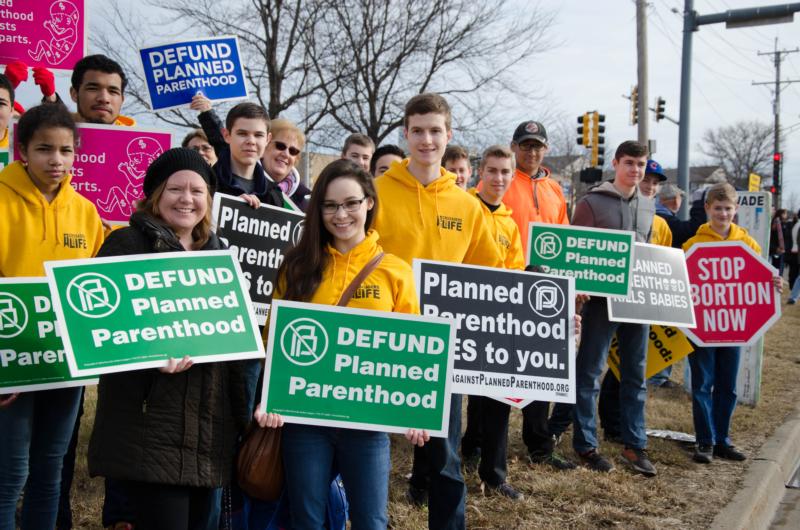 Members of the "Crusaders for Life" pro-life youth group rally Feb. 11 against Planned Parenthood in Aurora, Ill. It was one of many nationwide rallies calling on Congress to end federal funding of Planned Parenthood. (CNS photo/courtesy Sam Scheidler) See PLANNED-PARENTHOOD-RALLIES Feb. 14, 2017.

March 8, 2019 AUSTIN, Texas –  Ahead of a hearing the week of May 13, Attorney General Ken Paxton filed a brief with the full U.S. Court of Appeals for the 5th Circuit, asking it to hold that individual Medicaid recipients cannot use lawsuits to force taxpayer funding of Planned Parenthood.

In 2016, the inspector general of Texas Health and Human Services removed Planned Parenthood from the state’s Medicaid program based on video footage of actions that “violate generally accepted medical standards,” and for making false statements to law enforcement.

In his brief, Attorney General Paxton told the 5th Circuit that Planned Parenthood had a right to challenge the termination through state administrative proceedings, but it chose not to do so. Instead, it enlisted a handful of patients as plaintiffs and filed a federal lawsuit. However, as the brief argues, the Medicaid Act does now allow individuals to challenge a state agency’s determination that a service provider is not “qualified” under the Act.

“We’re confident that our reading of the law is correct and that the full 5th Circuit will rule that individual plaintiffs should be dismissed from this lawsuit. These taxpayer resources should be used to provide healthcare to the most vulnerable among us, not defend lawsuits from Medicaid recipients who would prefer to do business with Planned Parenthood,” Attorney General Paxton said.

In January, a three-judge panel of the 5th Circuit unanimously lifted the district court’s injunction, ruling that it applied the wrong legal standard. But the panel also ruled that the individuals in the Planned Parenthood lawsuit could bring their suit based on prior precedent, which the concurring opinion requested the full court reconsider by rehearing the case. The full court granted rehearing on its own motion in a February order.