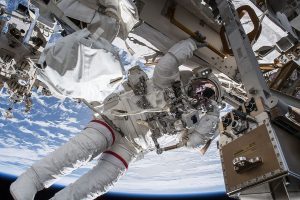 There’s something for everyone

HOUSTON, Feb. 17, 2020 – Space Center Houston’s spring break, presented by the city of Webster, will immerse visitors in what NASA is doing now from the Moon to Mars and inside Mission Control. The nonprofit’s spring break, March 7-22, provides visitors access to be a part of the NASA Mission.

Explore the cosmos with the leading science and space exploration learning center. Take part in more than 400 things to see and do including an all-new spring exhibit, a world premiere space screening, the NASA Tram Tour to go behind the scenes at NASA Johnson Space Center and much more.

Delve into the science behind the latest technology. Space Center Houston’s all-new, interactive spring exhibit Bionic Me, developed by Scitech and produced by Imagine Exhibitions, is inspired by nature and human ingenuity. Fly a virtual jetpack. Use a sensor to control a prosthetic arm. Learn to move a ball with the power of your mind. Climb into an exoskeleton to see what you can do with enhanced strength. This new exhibit is open Feb. 22-May 3.

Join a momentous year celebrating the International Space Station (ISS). Learn how the ISS has significantly furthered humanity and space exploration over the last 20 years of continuous human occupancy. Space Center Houston will recognize the ISS throughout the year by sharing educational activities and programs highlighting the space station and its goals.

Learn how human factors engineering relates to spacecraft and spacesuit design while celebrating Women’s History Month and the 20th anniversary of the International Space Station during the next installment of its Thought Leader Series, presented by UTMB, Designing for Human Performance at 7 p.m. March 5. Speakers include Celena Dopart, human factors engineer for Starliner at Boeing, and Katie Spira, NASA flight controller. This evening event is free to the public and a ticket is required.

Travel through 13.8 billion years of cosmic evolution and future space exploration at the world premiere of Cosmos: Possible Worlds “The Man of a Trillion Worlds” with special guests Ann Druyan and Sasha Sagan at 7 p.m. March 12. Following the screening, join us for an intimate conversation with Ann Druyan, series creator, executive producer, writer and director, and author of the companion book Cosmos: Possible Worlds; and her daughter Sasha Sagan, author of For Small Creatures Such As We.

Cosmos: Possible Worlds, helmed by Sagan’s collaborator, Ann Druyan, boldly carries the torch forward, making this season the most ambitious yet. The series is a triumphant voyage through humanity’s past, present and hope-filled future, taking viewers to previously uncharted territories and turning complex themes of science and exploration into a mind-blowing adventure beyond the realms of the imagination.

This special sneak-peek episode, “The Man of a Trillion Worlds,” portrays a young Carl Sagan who lies on the rug of a tenement, dreaming of interstellar adventures and infinite possibilities. Sasha Sagan appears in the live-action role as her paternal grandmother, Rachel Gruber Sagan.

Hear space stories from a hero. Astronaut presentations will be inside Space Center Houston and at Rocket Park, March 7, 8-14.  For a premier experience, guests may purchase a ticket to have Lunch with an Astronaut, offered every day but Sundays, March 6-14.

Board the NASA Tram Tour and go behind the scenes at NASA Johnson Space Center. See the state-of-the-art astronaut training facilities including the Orion Mission Control, which NASA will use to support deep space missions, Rocket Park, where a real Saturn V rocket is housed and the Space Vehicle Mockup Facility. Guests can also take a tram tour to experience the newly restored Apollo Mission Control Center and see the room just as it looked when humans first landed on the Moon.

Make the most out of your visit. Purchase a parking pass and general admission tickets online. Create your own journey. Download the free Space Center Houston app for an interactive mobile experience. The app features self-guided virtual tours, augmented reality, videos and audio stories about the future and historic feats in human space exploration. To download the app, go to the App Store or Google Play.

Tickets are available online at spacecenter.org or at the door. Prices range from $24.95 for children to $29.95 for adults, with discounts for seniors and members of the military. Become a member and come back free as often as you like for one year, plus get access to the Members Lounge during spring break.