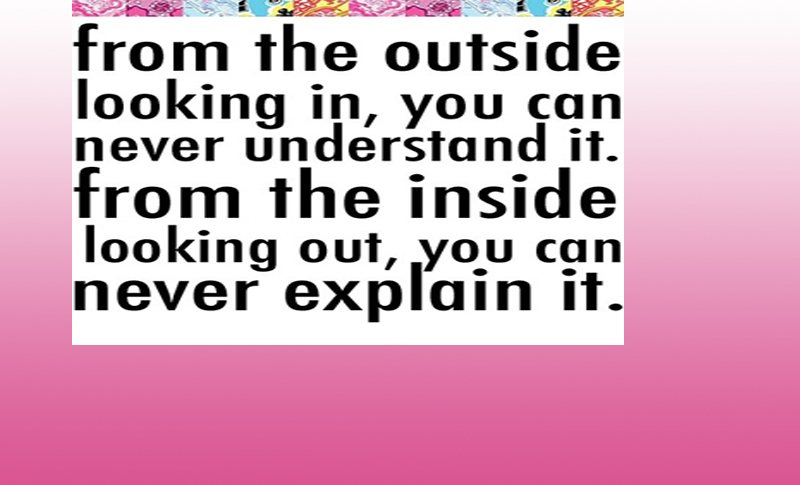 Recent developments in the Saga of the Threats to local Restaurants!

Posted By: Editor - Nelson Thibodeauxon: July 12, 2016In: Breaking News, City Government, Editorials, Featured, Local Business
Print Email
Colleyville, Texas   July 12, 2106
an Editorial by Nelson Thibodeaux  (Meaning MY opinion)
Initially an email sent from Mark Henderson to 4 local Colleyville restaurants, took homage with their right to support local City Council and Mayor candidates.
In turn, Henderson threatened not to do business with any of the aforementioned (although he complimented the establishments on their food.)  The initial emails was reported on LNO  along with the response by one of the owners below:
From: “Mark Henderson”
Date: July 8, 2016 at 6:04:16 PM CDT
To: <nextwoodfired@yahoo.com>, <info@laharanch.com>, <sonicsupport@gil.com.tw>
Subject: Right To Choose Next Wood Fired Bistro, Sonic, Red Barn and La Hacienda
Dear Owner/Manager,In the months leading up to the May 7th Colleyville election for Mayor and City Council, you chose to campaign for and support the Challengers, Nakamura, Lindamood and Newton, and their misinformation, half-truths and lies.  That is your right. The Challengers won and they are now trying to impose their personal agenda against the majority of the Colleyville residents. Our water bills were never high (compared to our surrounding cities) and have not been reduced;TexRail is not stopped and will never be stopped as the rail line was here long before Colleyville became a city; there are no apartments in Colleyville (nor will there ever be); and, our property tax rates are one of the lowest in NE Tarrant County.  It is also our right to support those businesses in Colleyville as we wish as it is your right to support any side in a campaign.You have lost loyal customers who loved the Ham, Brie & Apple Panini at Next Wood Fired Bistro.  As for Sonic, we always ordered the #2 for my whole staff; at Red Barn, we ordered and loved your great ribs and at La Hacienda we loved your fajitas … but we are now seeking other Colleyville restaurants without regret.We choose NOT to eat at your restaurants in the future and we will NOT recommend your restaurants to anyone.  I assure you that this email will go to the majority of Colleyville residents which is “MY RIGHT”.

Original statement in response to this email from Tom Aikens, Next Wood Fired Bistro & Vino

I support who I support, what I support whenever and however I damn well please. I do not take ‘threats’ very well.
Tom R. Aikens Next Wood Fired Bistro & Vino Bar

After reading an LNO Editorial concerning the Mark Henderson threat to “recommend to a large local ’email list’ to discourage patrons NOT TO DO BUSINESS  with 4  local restaurants,” the author, of the email below, decided to contact the City Council with the following suggestion.

Honoring the request of the author, LNO will not reveal the name at this time, however a copy is below.

The recent events in Dallas were devastating to the entire Metroplex, and it was heartening to see our City Council put together an event that allowed our community to show their support and gratitude for our police force. I was pleased to see so many of you Council members set aside your differences to stand together in solidarity at this event.

I am emailing you today to inquire about honoring a local business that has always been vocal in backing the Blue and other local causes. Red Barn BBQ has been a landmark in Colleyville for many years, and Von Husbands has shown that he is deeply committed to supporting our community.

Not only did he changed the lighting and signage – several months ago – to show that Red Barn “Backs the Blue”, he is a tireless crusader for animal rescue and has always been willing to lend a hand or open his doors for local causes (Lions Club events, GCISD teacher tragedies, and school events, just to name a few). I don’t know how you determine which business is to be honored at each upcoming Council meeting, but I would like to nominate Red Barn BBQ to be considered for this community-wide recognition. Red Barn BBQ has given so much to our community, and I would like to see that business receive the accolades it deserves.

Subject: Red Barn BBQ
Dear Councilmembers and ________,
I am attaching our email and Mr. Husbands’ (owner of Red Barn) reply which I found extremely disgusting, as well as, disturbing. Upon receiving Mr. Husbands’ threat, I went to the Colleyville police and now have a case number. The police will be monitoring any future threats made to me or my husband from Mr. Husbands from now on.

Please reconsider giving this man any recognition, we can choose what businesses we will support without fear of retribution …this is AMERICA. FYI… none of the other restaurants reacted in such a vulgar way. I agree that Colleyville businesses should be recognized but no one or their business should be acknowledged when they lack a moral compass.
Regards, Patricia D. Henderson
Law Offices of Thomas and Henderson, P.C.
2750 William D. Tate Avenue Suite 100
Grapevine, TX 76051
817-358-8900 Phone 817-545-3388 Fax

So apparently Patricia Henderson and Mark Henderson were not satisfied with an attempt to cause financial losses to 4 local Colleyville businesses, now they are wasting the valuable time of the Colleyville Police with a a complaint that Mark Henderson was “physically threatened” by one of the restaurant owners.  Understand this is during the same week many of these officers are grieving for their lost brothers in blue from Dallas.  In fact, at least one prominent officer had previously worked with two of the officers assassinated.  So the readers have to ascertain which is more disgusting, going to the Colleyville Police in this time of grief or receiving a “salty” email from the owner of the Red Bar?

Then this email is followed by another email to the individual that had initially contacted the City Council members with a simple recommendation of acknowledging one of the restaurants “threatened” by the Hendersons.

Why would you be concerned about where the email came from…(which council member?)

Maybe check with the police , perhaps Mr. Husband is on there short list?  How can you be such a shallow person to ignore the threat at hand?

In the spirit of full disclosure the following was the content of a private email from Von Husbands, with the salty language redacted; however when you fill in the redacted blanks, there is nothing that appears to be remotely be a physical threat to the apparently “frightened” Mark Henderson.

The attached is a copy of the early correspondence: Von Husband Redacted ,
UPDATE
The following statements was posted by Mr. Husbands on Facebook this afternoon”
“Von Husbands UPDATE : I was notified this morning that the Henderson’s notified the CVPD in an attempt to bully and intimidate me.
A officer was dispatched and determined that no offense occurred on my part and NO report made .
I feel like all CV restaurants should be made aware of these cyber terrorist so that they will not end up on boycott campaign in the future .”
Followed by:Von Husbands As the peacemaker and compassionate person that I am , I guess the rage came from the fact that a so called leader of the chamber could seek to destroy my livelihood as well as my employees livelihood and their families. I hope my friends and supporters will except my apologies for my language in the response to Henderson .
In conclusion the financial threat against these restaurants was converted to the Hendersons being the “victim” claiming a physical threat from Mr. Husbands.
There was no apparent physical threat from Mr. Husband’s  reaction to having his business threatened by this couple of malcontents.However, it shows the lengths of intimidation that has been contributed to some of the past and present long serving elected city officials.By the way, some of the LNO staff had lunch at Tom Aikens, Next Wood Fired Bistro & Vino
Some great food pictured below!  And yes Martha, I HAD THE SALAD! 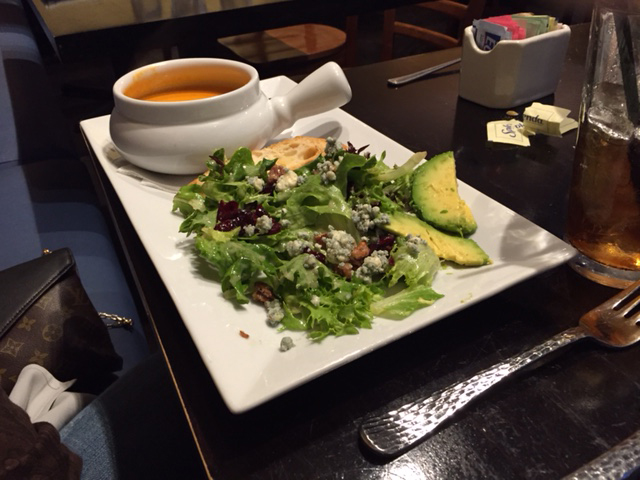 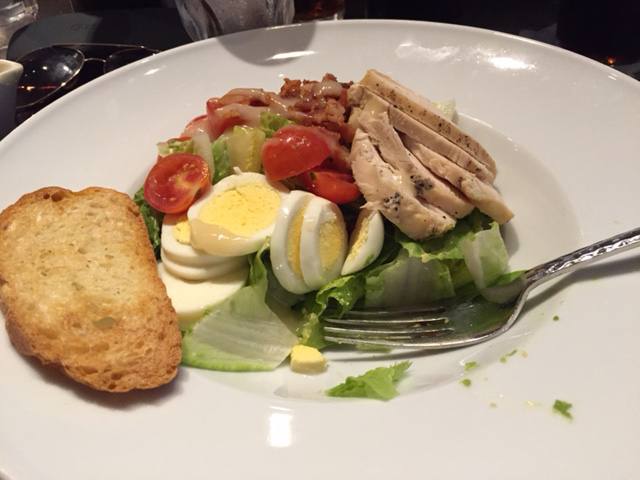 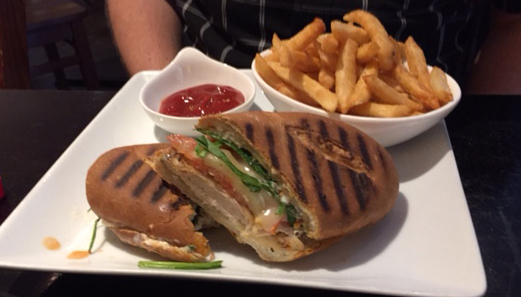